“Bond doesn’t equal punishment:” How a tool is used to keep accused from fleeing 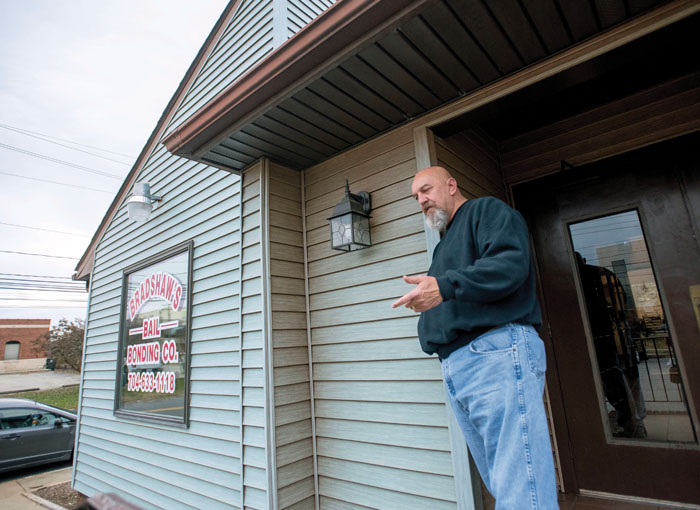 SALISBURY — It’s been 33 days since Madison Drew Harrington walked out of the Rowan County Jail after posting a $500,000 bond much to the dismay of some in the community, including murder victim Michael Earley’s family.

Harrington, 19, of Fish Pond Road, was charged with felony accessory to murder after the fact. Rowan County Sheriff’s Office detectives said in May that Harrington was accused of assisting in the dismemberment of Earley’s body and concealing the crime. She remains on an ankle monitor, a condition of her release that was initially established following an early court appearance.

Harrington was released late Nov. 5 after posting a split bond of property and cash. Lauren Grimes, 19, who was also charged with felony accessory after the fact, remains in the Rowan County jail under a $300,000 secured bond.

Earley, 19, was killed in early May after he went to sell marijuana to Carlos Rosas Jr. in a prearranged transaction. Investigators said Earley was beaten, his body partially dismembered and his remains buried in a secluded area at Rosas’ Rockwell home. The then-19-year-old Rosas was charged with murder and concealment of a death. He remains in the county jail under no bond.

Earley’s father, Stephen, and mother, Jessica, both have expressed concern and anger about Harrington’s release, which sparked Jessica to initiate a protest, albeit civil in the beginning. Earley thanked friends and family for their support, but that soon turned into an angered, grief-stricken mother seeking justice for her son. About 25 people gathered on the steps of the Rowan County courthouse on Nov. 19 to protest nearly a week after Harrington’s release. They would later march on the sidewalk across the street from the courthouse chanting “justice for Michael.”

Jessica Earley has been especially vocal about what her son’s loss has meant to her family and what she believes is an injustice by the judicial system. She’s raised questions about the complexity of the process of bonds, leading the Post’s efforts to seek an explanation.

In its easiest interpretation, bond or bail allows someone who has been arrested to be released from jail until his or her case is completed.

“It’s not for punishment. It’s to guarantee the appearance of a person in court,” said Salisbury bail bondsman Phillip Bradshaw.

And the process of setting bonds always starts with a magistrate or a judge, said Salisbury Attorney Chris Sease, who is contracted through Tharrington-Smith, a law firm based in Raleigh.

After an arrest, a magistrate can issue a bond, which falls within predetermined state guidelines that depends on the alleged crime and the person’s criminal record.

Determining factors for releasing a person on a bond include the severity of the crime, whether that person is a flight risk, if they are local, their criminal history and other items required by state statute, Sease said.

“If you get a secured bond set on you by a magistrate, then you can post the whole amount in cash yourself. Once that case is disposed of, you get your cash back,” Bradshaw said.

Using a property as a form of bond requires a person to use the equity in their home as collateral. A lien will be placed on the property until the entire case has been resolved.

If a bond is over $5,000, an attorney is required to conduct a deed search to ensure there are no judgments against the property and no taxes are owed. Then it can be used as a property bond, Bradshaw said.

Bonds don’t have to be paid in full by a particular party. For instance, the person using the collateral can pay a portion, with the remaining being taken care of by a bondsman.

In the case of Madison Harrington, a piece of property was used as collateral and, when they didn’t have enough property to finish the bond, Bradshaw said he “stepped in and wrote the remainder.”

Bonds associated with higher-level offenses, including murder, operate differently. No bond is typically issued on a murder charge. In other cases, it can change once the case is determined to be a death penalty case or noncapital.

Sease said Harrington’s bond seemed a little higher than most Class C felonies, but it wasn’t out of line, especially given the nature of the allegations in this particular case. She tried to reduce her bond and was unsuccessful.

In simple terms, Sease said, once that bond is set, a person can work with a bondsman for a percentage or put up property.

When someone is placed under a bond, Bradshaw said, there’s accountability.

“Little Joe gets a written promise. And he’s turned loose and there’s no accountability,” Bradshaw said.

There is no statutory first appearance required within the first 96 hours for people charged with misdemeanor offenses, which can in some cases result in those charged with “very low-class misdemeanors maxing out their sentence by the time he or she gets to district court versus a defendant charged with a high-level drug trafficking (charge) who makes a $2 million bond,” Wagoner added.

Once the case is transferred to superior court or the person is indicted, a judge in Wagoner’s position has ability to modify a bond following a motion by the district attorney or defense attorney.

She said a superior or district court judge will take into consideration at that hearing the nature of the offense charged, criminal history of the defendant, if the defendant poses a threat to the community, the likelihood of the defendant to flee, the possibility of destruction of evidence and if the defendant has previous failures to appear in court, among other things.

The magistrate considers much of the same when setting conditions of release when the defendant is first taken into custody. But by the time the case gets to district court or superior court, much more information is available to the judge.

“All of that said, it has been my experience in superior court that motions to modify bond are the exception rather than the rule,” Wagoner said.

Rowan County, like most counties in the state, has bond guidelines that are “developed by the senior resident superior and the chief district court judges and are just that — guidelines,” Wagoner said.

She recalled working with Superior Court Judge Thomas Seay when she was chief district court judge on a few revisions. Wagoner said she and Chief District Court Judge Charlie Brown discuss any possible changes in their changes now.

“However, no wholesale changes have been made in a number of years and we are operating on the guidelines issued under then-Superior Court Judge Larry Ford. Since district and superior courts are willing to hear any and all motions for bond modifications (down or up), the guidelines are serving their purpose,” Wagoner said.

She said that judicial officials all strive to have a system that’s fair to all — defendants, victims and the public.

“It is not a perfect system. We are constantly seeking ways to improve,” she said.

This year, Mecklenburg County updated its bail policy in an effort, Mecklenburg judges said, aimed at making sure the justice system was fair to everyone no matter their income. Under the old system, defendants who could not afford otherwise would remain in jail.

Under the new system, defendants would are scored under an algorithm that gives them a grade on the likelihood they will show up for court and commit another crime before they appear in court for trial.

The algorithm or assessment looks at factors that include a person’s current age, prior convictions, pending charges and prior failures to appear in court. The public safety assessment was created by Arnold Ventures.

A number of judicial officials including its chief district court judge, chief magistrate and district attorney reviewed the policy for over a year.

Mecklenburg County determined in its 2017-2018 fiscal year that 96% of the county’s pretrial supervision program participants appeared for court and that 81% did not get re-arrested before their first appearance, without requiring financial conditions of release.

Wagoner said she’s most concerned about the cost of the assessment, specifically for additional personnel to score a person’s risk and the time it might take to develop an assessment for each defendant.

“Moreover, the assessment is only as good as the person administering it and scoring it,” she said. “Mecklenburg has many more private and public resources available than we do in Rowan County and other counties similar to us. However, if such a revision would alleviate jail overcrowding, perhaps the county and the taxpayers would be saving money.”

She doesn’t envision Rowan changing its pretrial release guidelines until there’s validation of the effectiveness and safety of such a program.

Bail bondsmen always hope that a defendant shows up for court, Bradshaw said, but sometimes they don’t. That’s colloquially known to bondsmen as a bond skip or bail jumping.

It’s been glamorized on television shows such as “Dog the Bounty Hunter,” but it’s steeped in reality. Bondsmen often have to hunt down a person who skips out on a bond.

“A lot of people know I hunt people down. You never see shows on TV about writing bail. You see shows about people hunting people,” Bradshaw said.

He still “hits the streets” to knock on doors and call around to see if people have seen the person he’s “hunting,” but Bradshaw, like many others, have employed a new tool — social media. Bradshaw has several thousand Facebook “friends,” many of whom will message or call him if he posts someone he’s looking for and they know the whereabouts.

“The more people they know, the better the chances are I’m going to get that phone call,” he said.

People turn in others for different reasons, but revenge is one of the most popular.

“There’s nothing better than a pissed-off woman, especially an ex-girlfriend or wife,” Bradshaw said. “They call and say ‘he hasn’t paid child support in three months. I don’t care. I’ll turn him in.”

As for folks who aren’t found, consequences await. The court issues a warrant for that person’s arrest for failure to appear or contempt of court, which could result in jail time or court fines if they are found guilty.

“So, when they don’t go to court, we get a forfeiture in the mail,” Bradshaw said holding up a form. “It tells us when we wrote the bond, how much the bond is, when they failed to appear and a final judgment date. It means if this person isn’t picked up before that date then I gotta pay this $1,000 bond.”

So, if Bradshaw can’t find the person or the person doesn’t show, he’s liable to the court.

Christmas in Cleveland: A ‘genuine’ town delivers another homespun…