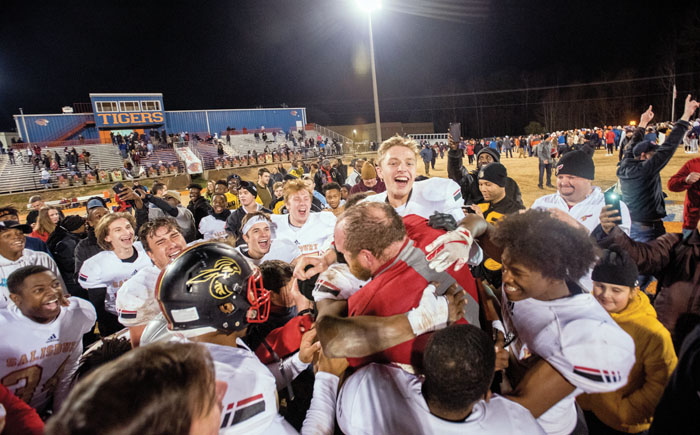 RANDLEMAN — It was far-fetched pipe dream back in the dog days of August, but it’s a mid-December reality — Salisbury’s football team will play for a state championship.

The Hornets cleared yet another forboding hurdle Friday night at top-seeded Randleman, where they captured the 2AA East regional title with a 14-7 fourth-round victory.

“We’re the only ones who said this could happen,” left tackle Carter Jenkins crowed as a joyous, post-game celebration unfolded. “The only ones. No one in the state except the people in our locker room believed we’d be here.”

Yet here they are, proud owners of a 13-2 record and slotted to face Shelby next Saturday at Wake Forest’s BB&T Stadium. Salisbury’s path was cleared by a defense that allowed 78 total yards, forced seven punts and stymied the previously unbeaten Tigers (13-1) on all nine of their possessions.

“This is crazy,” beamed defensive tackle Zae Clay. “Everyone was down on us, but somehow we kept capitalizing all season long. We deserved this.”

Third-year coach Brian Hinson said the key was Salisbury’s bullet-proof defense, which provided a steady diet of physical punishment. Randleman quarterbacks were sacked three times. The Tigers were limited to 26 yards on the ground. And running back Nahiem Lilly — a devastating, sharp-eyed runner who surpassed 2,200 yards rushing this season — was no more damaging than an ordinary sophomore, finishing with 32 yards on 17 carries.

“That’s been our ‘MO’ the whole season — playing great defense,” Hinson said. “Our defense was lights out once again. It makes it a whole lot easier for me to manage a game when you’ve got a defense that plays like that.”

Salisbury’s offense was equally effective. It produced 332 gut-wrenching yards, including a season-best 184 and a pair of touchdowns by junior running back Mike McLean. He had 97 yards at halftime, when Hinson perceptively singled him out.

“He told me if I’m going to run like that, we’re going to win this game,” McLean reported. “He told me I’m the dog of this team.”

Although the score was knotted 7-7 at the break, Hinson sensed the Hornets’ running game had found its legs.

“At the end of the first half, we kind of felt we were in a groove and could run the football,” he said. “I told Mike, ‘Hey listen. You’ve averaged about 14 or 15 carries a game. You’ve got fresh legs and we’re going to ride them in the second half.’ He answered the bell and did a great job.”

McLean finished with a season-high 27 attempts, plowing behind an offensive line that crackled and burned with cohesion.

“Mike was a workhorse,” said SHS quarterback Vance Honeycutt. “And the offensive line kept opening big holes for him. He just rammed it down their throats.”

McLean opened the scoring on the first play of the second quarter. He capped a 69-yard scoring drive when he took a handoff, juked one step to his right and scored on an 8-yard cutback to the left side. “Whenever there’s a cutback, he’s supposed to hit it,” Honeycutt said. “And that time he did.”

Teammate Jalon Walker — a 6-foot-3 sophomore receiver — made a highlight-reel catch on the drive, back-pedaling and extending his arms overhead to snare a 33-yard strike from Honeycutt on the last play of the opening period. The lead survived until late in the half, when Randleman free safety Dominick Poole intercepted a pass and returned it 85 yards down the right sideline for a game-tying touchdown.

“I was trying to make a play,” Honeycutt explained, after completing 7-of-10 passes for 86 yards. “Their guy made a better play and jumped it.”

It barely diminished Salisbury’s optimism. On their second drive of the second half — a 12-play excursion that melted more than five minutes off the dwindling game clock — the Hornets regained the lead. This time, McLean followed Jenkins, a 250-pound bulldozer on the OL, on a 6-yard TD run.

“We got off the ball, did our assignments and Mike ran like hell,” Jenkins said. “He hit the holes. He did it. He got it done.”

So did the Salisbury defense, which spent the final 11 minutes and 30 seconds making spirits bright. Randleman punted twice, had another drive stall at its own 32 when 280-pound Nick Hall pancaked quarterback Coby Price on fourth down and finally ran out of time. By game’s end, the Hornets owned the house, the Tigers and an opportunity to claim their first state championship since 2010.

“Like I said at the beginning of the season, our defense is official and certified,” said SHS linebacker Jabril Norman. “We have faith our defense will make plays and hold it down.”

Losing coach Shane Handy, a former Catawba assistant, was certainly impressed. “They were just too dominant on defense,” he said. “They had a heck of a game plan and they executed it. We all wish Salisbury good luck.”

Of course, everything the seventh-seeded Hornets learned this semester will be on next weekend’s final exam against Shelby.

“We don’t have to beat them every time we play them,” Hinson concluded. “We’ve got to beat them one time. I’m gonna say this right now — nobody in the state is going to give us a chance to win it. But I’m not worried about everybody else. I’m worried about Salisbury and the players in our locker room.”

NOTES: Shelby (13-1) is the No. 1 seed out of the 2AA West bracket. The Lions won their 10th straight game by trouncing Burns, 42-14, on Friday. Game-time Saturday will be either 11 a.m. or 3 p.m. … The championship appearance will be Salisbury’s first since winning the title in 2010. In that game, also played at BB&T Field, Salisbury defeated Northeastern, 30-0.