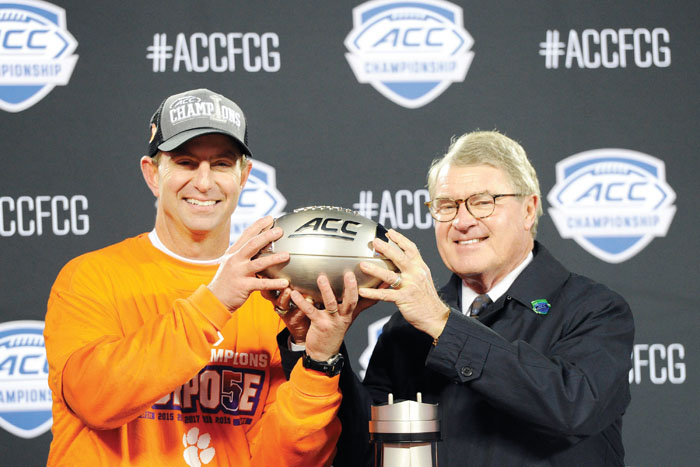 By PETE IACOBELLI AP Sports Writer
CHARLOTTE (AP) — Trevor Lawrence believes No. 3 Clemson is better than it was a year ago. He and the Tigers will get the chance to prove it in the College Football Playoffs.
Lawrence threw four touchdown passes, three to Tee Higgins, and the defending national champions dismantled No. 22 Virginia 62-17 for its fifth consecutive Atlantic Coast Conference title Saturday night. The Tigers (13-0, No. 3 CFP) won their 28th straight game and become the first program with that many wins in a row in a league title game.
Lawrence said Clemson came out with a fire to finish league play strong.
“I’m proud of the way we handled it. We came out with a fire. And while Lawrence acknowledged the difficulty of comparing last year’s group to this one, “the way we’re playing, I think we are better,” he said.
Maybe good enough to be No. 1?
“I think so. But, hopefully, in a couple of weeks we’ll get a chance to prove it,” he said.
It would be hard to bet against the Tigers, who easily put away the Cavaliers (9-4, No. 23 CFP) with their dazzling set of playmakers.
Lawrence and Higgins, the game’s MVP, headed that list against the Cavaliers.
“We just want to have an opportunity to compete for the whole thing,” Clemson coach Dabo Swinney said. “I think we’ve done enough to get somewhere in that top four, wherever they put us.”
Virginia showed off a game plan that caused the Tigers a few early headaches. But Clemson’s talent quickly took control on the way to an ACC championship game record for points and yards (619).
“In championship games, you’ve got to expect some adversity,” Clemson linebacker Isaiah Simmons said. And we always say that when adversity hits, you’ve got to be stronger and stronger.”
Lawrence set an ACC title-game record with his four touchdown throws and had 302 yards passing, his second best total this season, and completed 16 of 22 passes before coming out in the third quarter.
Higgins finished with 182 yards receiving yards and the three TDs, both bests in ACC Championship game play.
Travis Etienne had 114 yards, his eighth game over 100 yards this season.
Virginia and Perkins appeared to have a game plan to compete with the Tigers, even without leading receiver Joe Reed out due to injury.
Perkins threw a 20-yard scoring pass to Hasise Dubois to tie it 7, just the second TD pass allowed by Clemson in its past seven games.
Virginia’s defense sacked Lawrence twice in the opening half (Clemson had allowed only 11 sacks in the regular season) and Perkins accounted for 177 yards the first 30 minutes — nearly as many as the 194 yards the Tigers allowed in a 38-3 win last week over South Carolina.
But it was impossible to contain Clemson’s offense.
“We didn’t make enough plays, we couldn’t make enough plays,” Virginia coach Bronco Mendenhall said.
Higgins had scoring catches of 19 and 7 yards, Justyn Ross went 59-yards for another touchdown (the second longest in ACC Championship game history) and Etienne broke free for a 26-yard touchdown run as Clemson opened a 31-7 lead by halftime.
Perkins, the ACC’s leader in total offense, had 324 of the Cavaliers’ 387 yards, which were a season high allowed by Clemson’s defense this season.
The Cavaliers played without leading receiver and the ACC’s top kick returner in Joe Reed due to injury.
Perkins believed the loss showed Virginia how to move up in the ACC. The gap with Clemson is “big, but we have the opportunity in the coming years to close it,” he said.
THE TAKEAWAY
Virginia: The Cavaliers showed creativity and ability in devising and executing a game plan designed to make Clemson sweat. But the gap between Virginia and the Tigers — as it is for most everyone else in the ACC — was too wide to overcome without perfection on nearly every snap.
Clemson: The Tigers showed once more they had no equals this season in the ACC. The challenge now grows more difficult with Clemson likely facing off against LSU or Ohio State in the national semifinals.
CLEMSON’S FOCUS
Tigers receiver Justyn Ross said the team was fully ready to play because each championship game is a different experience — and another chance to achieve. “It means everything to be part of this legacy,” he said.
Clemson has won six ACC championships in the past nine season. It has a 63-2 record against league opponents since the start of the 2015 season.
It means everything to be a part of this legacy.
“Just seeing the look in everybody’s eyes, there’s an excitement about being in this game. It’s always going to be different because there’s always a different challenge.
PERKINS’ GAME
Virginia quarterback Bryce Perkins had his moments against Clemson. He threw two touchdown passes, something the Tigers’ No. 1 pass defense had allowed just once in a 21-20 victory over North Carolina in September. Perkins also set the Cavaliers’ single-season record with 3,215 yards.
UP NEXT
Virginia awaits its bowl assignment, most likely the Orange Bowl.
Clemson will head to the College Football Playoff with its matchup announced Sunday.
___
More AP college football: https://apnews.com/tag/Collegefootball and https://twitter.com/AP_Top25