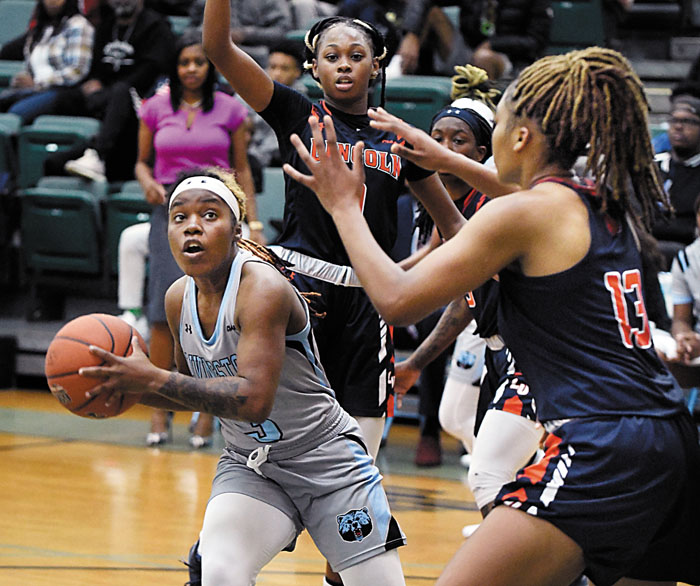 Livingstone (3-4, 1-2 CIAA) rallied late in the game, pulling to within three points at 64-61, with 39 seconds left, but Lincoln (8-1, 3-0 CIAA) got two free throws each from Joy Morton and Bryanna Brown in the final 15 seconds, securing the victory.

The Blue Bears, trailing, 19-14, after the first quarter, outscored Lincoln, 20-8, in the second period. Guards Darra Walker and Daijah Turner got hot from the outside, sparking Livingstone to its halftime advantage.

The Lions, however, connected on five of their first six shots after intermission, taking a 37-36 lead. The visitors really never trailed again.

The fourth period began with Lincoln in front, 54-42, but the Blue Bears’ pressure defense did make things interesting late. LC forced three straight turnovers and when Walker nailed a 3-pointer at the :39-mark, it was suddenly 64-61.

But Lincoln hit the clutch free throws down the stretch to ice the contest.

Turner led the Blue Bears with 15 points while Daisa Harris followed with 14 points and Walker added 12 — all on 3-pointers.

The Lions may have won the game at the foul line, sinking 18-of-26, while Livingstone made just 6-of-10 at the charity stripe.

Lincoln survived 27 turnovers during the contest, while LC committed 22 miscues.

Livingstone returns to action on Monday, traveling to CIAA foe Fayetteville State for a 5:30 p.m. tip-off.