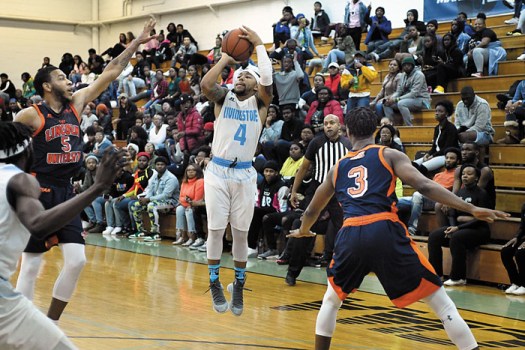 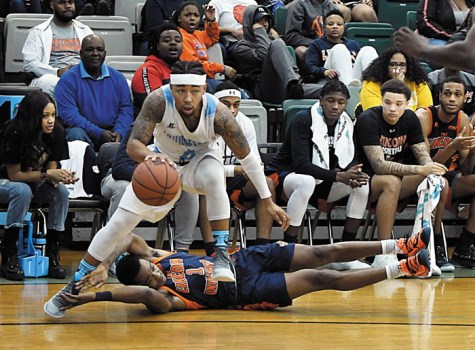 LStone's Roger Ray 4 drippling as he steps over a Lincoln defender. photo by Wayne Hinshaw, for the Salisbury Post

SALISBURY — It looks like the Livingstone men’s basketball team isn’t going away.

Even on a night when the Blue Bears were a quart low in the grit department, they found a way to win Saturday’s CIAA battle with visiting Lincoln University (Pa.). Livingstone was thoroughly out-rebounded, shot 2-for-16 on three-point attempts and trailed for much of the second half — yet somehow prevailed, 67-63.

“It says that we didn’t panic,” coach James Stinson offered, moments after LC (7-2, 3-0) used a 13-2 finishing kick to earn its fourth consecutive victory. “In past years, we may have lost a game like this. Today, we stayed the course. I think it shows we’re capable of winning tight games, even when we don’t play our best.”

This one was tighter than expected. While the Blue Bears averaged just a tick over 90 points-per-game through the season’s first eight games, they were lured into a slower pace by struggling Lincoln (2-8, 0-3).

“Every team tries to slow us down because we’re so good in transition,” sophomore guard Cameron Carpenter said. “Tonight, we kind of played their game. We didn’t push the ball like we should have.”

Don’t blame Carpenter. He shot 7-for-10 from the field, topped all scorers with 16 points and made six steals. Teammate Roger Ray, the school’s all-time leading scorer, was held to 11 points but collected seven assists — mostly on no-look passes to Carpenter and alley-oop feeds to 6-9 juniors Navar and Lydell Elmore.

“They played a lot of box-and-one against Roger,” Stinson said. “So we decided to put the ball in his hands and get creative. Eventually, they were sending two defenders after him and he took advantage of what was there.”

Livingstone’s performance waxed and waned throughout the game. It opened a 23-14 lead midway through the first half when rugged forward Malik Smith hit a layup on a spectacular, tic-tac-toe play with Ray and Carpenter.

“Cam played with real poise and under control,” Ray said. “He started that play with a steal, threw it to me, and at the last minute I dumped it off to Malik.”

It was LC’s last field goal for more than five minutes, a drought that wasn’t snapped until Ray pulled up for a short jumper from the left side and put the Blue Bears up, 25-24. Lincoln forged a 32-31 halftime lead and extended it to 61-54 when Deaquan Williams elevated across the lane and scored on a one-handed jam with 4:33 remaining.

“All we can control is ourselves,” said Jordan Camper, Lincoln’s 6-8 forward. “We control our own passes, our own shots, our own rebounds. We can’t control them.”

Smith launched Livingstone’s game-winning rally with a three-point play before fouling out. And when Lydell Elmore muscled inside for a layup, then hit the second of two free throws, the Blue Bears had closed within 61-60.

“We’ve got a lot of threats out there,” Carpenter smiled afterward. “And we like to share the ball.”

Carpenter put LC ahead for good when he intercepted a Lincoln pass along the right sideline and motored in for a layup with 2:31 to play.

“I was just playing hard,” he said. “Just playing defense and trying to get out and run.”

Ray, who poured in 45 points in Livingstone’s double-overtime win against defending CIAA champion Virginia State on Thursday, helped cement the outcome in the closing seconds. There were only 2.1 ticks on the clock when his alley-oop lob was buried with a vengeance by Lydell Elmore and closed the scoring.

“It was one of those nights,” Ray said. “The last game we needed 45 from me. Tonight we needed assists. We got the ‘W’ — and that’s all that matters.”

NOTES: Livingstone shot a pedestrian 42.6 percent from the field and converted seven of 14 free throws. The Blue Bears put five scorers in double figures. Defensively, they forced 24 turnovers. … The win was No. 496 for Stinson in his coaching career. … Lincoln grabbed 17 offensive rebounds and won the battle of the boards, 50-34. Camper had 13 points and nine rebounds. Teammate Zahrion Blue pulled down 11 rebounds … LC visits Fayetteville State on Monday night, tipping off after the 5:30 women’s contest.