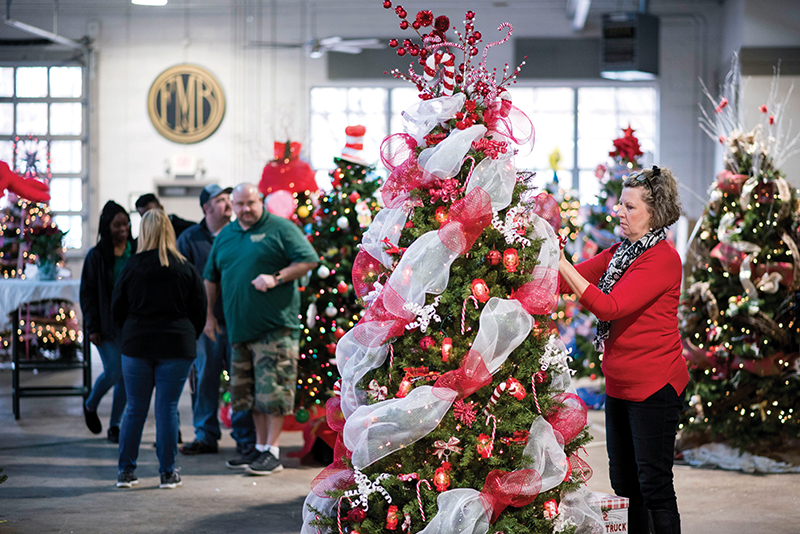 JON C. LAKEY/SALISBURY POST Elaine Holden, Outreach Program Coordinitor for the NC Transportation Museum Foundation, decorates the NCTM tree with several items from the museum gift shop. The ARC Festival of Trees is set to kick off on Friday evening for the annual fundraiser for the ARC of Rowan County. The finishing touches were being made to the trees on Friday at the F&M Trolley Barn on Liberty Street. Salisbury,North Carolina,12/6/19.

The 16th annual Arc of North Carolina-Triad Region Festival of Trees in Salisbury began Friday and continued Saturday at the F&M Trolley Barn, 127 East Liberty St. It continues Sunday from 1 p.m. to 5 p.m.

With approximately 50 trees sponsored and out for display this year, the event is free and one of the main fundraisers for the Arc, which supports those with intellectual and developmental disabilities and their families.

“It’s a family event. Families will often bring their children,” Sapp said. “People often say this is a good way to start their holiday season.”

Visitors for this year’s festival were able to see trees decorated with red, white and blue ribbons as well as snowflakes, ornaments, miniature cars and candy canes. Local businesses, civic organizations and individuals were among those sponsoring trees. Sponsors either decorated the tree or request that someone else to decorate a tree.

After being shown on display for the annual event, the trees will be delivered to nearby businesses and organizations in an effort to bring Christmas joy to the community.

Shelby Beck’s Christmas tree was decorated by her family and sponsored by Beck Import Services, owned by her husband Mark Beck. It was themed “Beck the Halls.”

Beck works for the Arc of North Carolina-Triad Region.

It took her about two weeks to design her tree. Beck’s family tree was decorated with gray and red ornaments, tools, a race track, and even a few toy cars owned by her sons Owen, Evan, and Atlas.

“I was here all day yesterday and finishing up today,” she said. “I just love the people that we serve and the population that it helps, and I love the aspect of the community it brings together.”

Assistant Regional Director of The Arc of North Carolina-Triad Region Lori Ewart said every tree is “unique and different.”

The event includes to a silent auction, “50/50 drawing,” raffle and musical acts.

Each person that comes to the event gets to vote on their favorite tree, and there are a number of awards and recognitions.

“We do this on annual basis. Shirley Holt is our coordinator and generally has in mind what we will do for our decorations,” Morgan said.

Morgan said she is looking forward “to resting, and fellowshipping with family and friends” this holiday season.

A tree named “Freedom’s Guardian” was decorated by the Bradley and Suther families. It was sponsored by Ken, Vanessa and Sara Bradley.

Ken Bradley said that next year will be his family’s third year taking part in the event.

“I was in the military for 28 years in the Air Force and I thought it was important to represent the military,” he said. “This is such a great organization and the money goes to such a great group. Now that I am home with my family, we like to do these types of things to give back to the community.”

Bradley said that his family plans on doing this “as long as they’re capable.”

Freedom’s Guardian was dressed in red, white, and blue ribbons and more.

Michelle Anderson, with Brooke and Brooke Attorneys at Law, said that “the excitement of everyone being kind to each other” is the greatest part of the holiday season.

Salisbury man gets 28 years in prison on child…