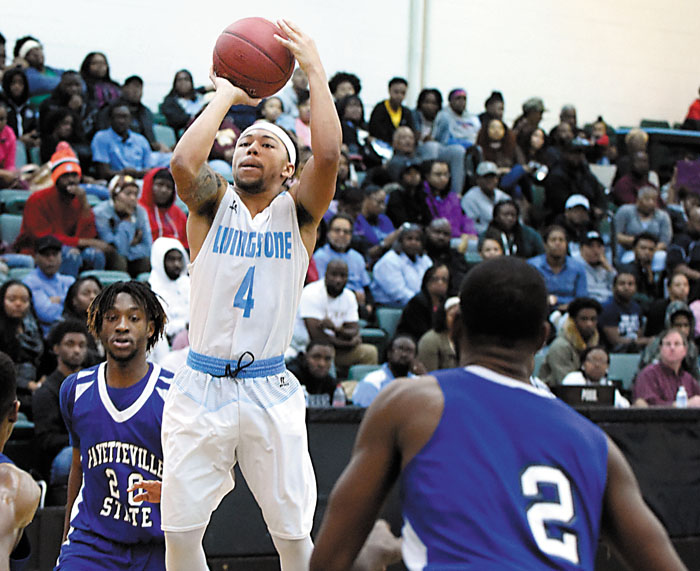 SALISBURY — What a night of college basketball at New Trent Gym!

Ray scored 45 points and in the process, became the school’s all-time leading scorer with 1,487 points, surpassing Jeff Persall, who had 1,464.

But another star was the Blue Bears’ Cameron Carpenter, who rescued LC at the end of the first overtime period.

Down, 112-109, with just two seconds on the clock, Carpenter drained a 30-foot, 3-point basket to tie the game once again. The Trojans had allowed the inbounds pass roll to half-court, where Carpenter picked up the basketball, took two dribbles and let it fly in front of the Livingstone bench.

The shot swished and the home crowded erupted. Some of the fans celebrated onto the court, but just momentarily. There was another five minutes to play.

In the second OT period, coach James Stinson’s Blue Bears raced out to a quick, five-point lead on layups from Ray and Lydell Elmore and a 3-pointer from O’Koye Parker.

The Trojans’ Walter Williams’ layup with 1:31 left cut the deficit to 122-120, but Livingstone began pulling away — again, behind Ray.

Ray drilled a 3-pointer with 1:11 remaining and then sank a free throw, giving Livingstone a 126-120 advantage.

With the victory, Livingstone improves to 6-2 overall and 2-0 in the CIAA.

The win was also the 495th for Stinson, during his combined careers at Livingstone and Barber-Scotia.

Ray’s point total fell one short of the school record for one game. Antonio Davis scored 46 points against St. Paul’s, on Dec. 7, 1987.

Elmore had a double-double, with 13 rebounds, in addition to his 20 points.

The back-and-forth first half saw Livingstone ahead, 47-46, as Ray had 19 points at the break.

The Trojans took control in the second half and actually built a 16-point lead at 81-65, with 10:21 remaining. But Livingstone were not done, especially on Ray’s big night.

The Blue Bears began chipping away, behind Ray, Elmore and Smith. Handley’s layup with 6:06 left completed the first comeback, giving LC an 84-83 lead.

But Virginia State built another seven-point lead and things looked bad for the Blue Bears. Again Livingstone rallied, and Handley again made a basket for a one-point lead (98-97), with 43 seconds left in regulation.

Williams nailed a big 3-pointer, just 11 seconds later, and the visitors went back on top, 100-98. Handley’s driving layup at :12 tied the game at 100-100 and after Lual Rahama missed a 3-pointer for VSU, Handley raced upcourt and beat the buzzer, but his layup attempt rolled off the front of the rim.