Jerry Jones tries everything, but Cowboys can’t get it right 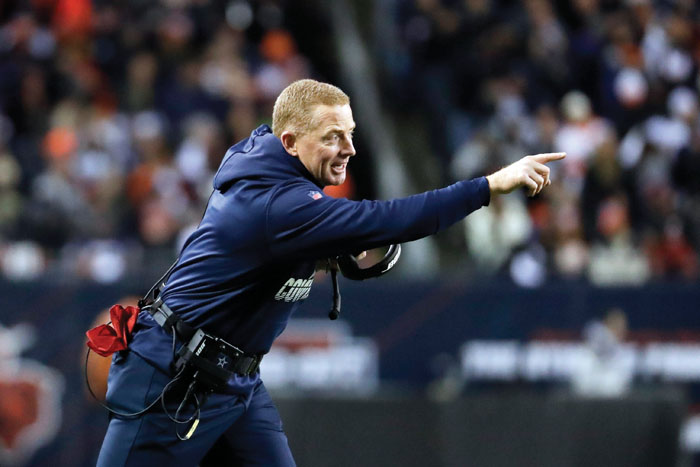 By SCHUYLER DIXON AP Pro Football Writer
Jerry Jones tried ripping the coaching staff of the Dallas Cowboys after the first loss in the current three-game skid, then took the gentle approach following the second.
The team’s owner and general manager just looked mad at the world on an embarrassing night in Chicago and didn’t seem to care that Dallas was still in first place in the NFC East after a 31-24 loss to the Bears that wasn’t nearly that close.
“Until we can win a football game, I don’t care what kind of contention we’re in,” Jones said. “We’ve got to start playing and winning a football game so that we can play better than we played tonight.”
The anger was still evident a day later when Jones didn’t like the way his radio show started Friday and cursed several times. He appeared to hang up after one of the expletives, but it was explained that the system cut off the call because of the language. Jones was reconnected, and the mood wasn’t much lighter for the rest of the show.
“Now, go on with your question, but I’m going to give you the answer I’m going to give you this morning,” Jones said early in the call. “I don’t like your attitude. I’ve been traveling all night and I don’t have the patience to jack with you today.”
The Cowboys (6—7) have never made the playoffs in a season with two losing streaks of at least three games. The first skid came after a 3-0 start. Despite seven losses in 10 games, Dallas will be no worse than tied with Philadelphia for the NFC East lead with three games remaining.
Just as he did after a Thanksgiving loss to Buffalo, Jones said he wasn’t going to fire coach Jason Garrett before the end of the season. A 24-7 deficit to the Bears fanned those flames, and led to questions of whether Garrett’s players have quit on their coach, who is in the final year of his contract.
“That’s false, false as ever,” quarterback Dak Prescott said. “And when you get to the playoffs, all of that is gone. It is washed out the window. We believe in our coach. We believe in his message.”
WHAT’S WORKING
Two-time rushing champion Ezekiel Elliott had his longest run of the season, 31 yards, against the Bears. The running game has looked against the Bills and Bears, but stalled drives and a porous defense led to big second-half deficits in both games.
The Cowboys ran out of time to stick with the run. As a result, Elliott’s career-long streak of consecutive games without at least 100 yards is up to five.
WHAT NEEDS HELP
The linebackers miss second-year man Leighton Vander Esch, who was an injury replacement in the Pro Bowl as a rookie. The 2018 first-round pick missed his third straight game and fourth overall with a neck injury.
Chicago tight end J.P. Holtz, who came in with 23 yards receiving for the season, took a screen 30 yards on a touchdown drive. Quarterback Mitchell Trubisky had 63 yards rushing, second-most of his career, and a TD.
Sean Lee, the 33-year-old who took a pay cut to stay as a backup linebacker, had his best game of the season filling in for Vander Esch in a win over the Giants. But he didn’t look good against the Bears. Jaylon Smith, expected to be an emerging star alongside Vander Esch, was beaten for a touchdown in another game without making much of an impact.
STOCK UP
WR Michael Gallup made several nice catches, including one on fourth down to extend a touchdown drive, and had 109 yards receiving. He is tied with top receiver Amari Cooper for the team lead with four 100-yard games.
STOCK DOWN
It’s hard to imagine the Cowboys will keep K Brett Maher after another critical miss, his third in two games and NFL-leading 10th of the season. They tried out three kickers during the week but decided to keep Maher. If they bring in somebody else, it figures to be the replacement this time.
INJURIES
Prescott injured a finger on his right (throwing) hand and sprained his left hand, but came out of the game OK. WR Cedrick Wilson, active most as a kick returner because RB Tony Pollard was out with an ankle injury, injured a knee trying to make a catch late in the game. While Wilson’s season is over, the injury isn’t as serious as the Cowboys feared.
KEY NUMBER
Plus-2 — The last time the Cowboys lost with a turnover margin of at least plus-2 was Oct. 27, 2013, when they finished plus-4 in a 31-30 loss at Detroit. Jason Witten tried to calm Dez Bryant during one of Bryant’s sideline meltdowns in that game. This time, Witten had the sideline meltdown.
NEXT STEPS
After four games in 19 days, the Cowboys finally get their mini-break before hosting the Los Angeles Rams on Dec. 15. It’s a rematch of a divisional playoff game won by the Rams on their way to the Super Bowl last season. Despite all the turmoil, Dallas makes the playoffs by beating the Rams and the Eagles the next two games.
___
More AP NFL: https://apnews.com/NFL and https://twitter.com/AP_NFL