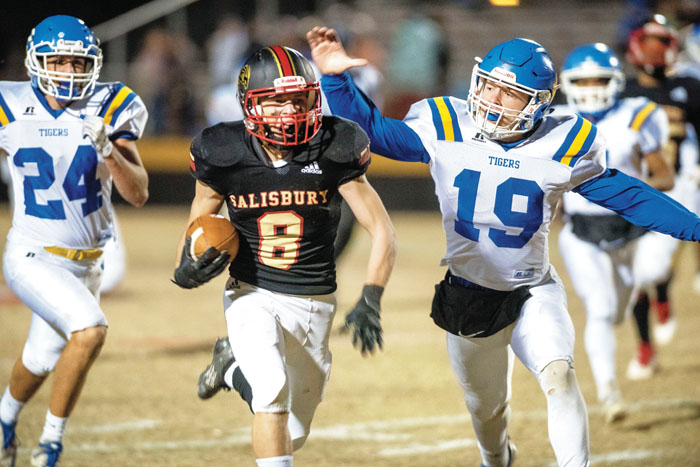 SALISBURY —  Two of Rowan’s all-time offensive players concluded their high school careers last Friday and need to be saluted before moving on to the Salisbury-Randleman clash.

North Rowan’s Malcolm Wilson didn’t play varsity as a freshman and had somewhat limited carries behind Jaleel Webster as a sophomore, but he turned in two phenomenal seasons.

North’s offense had a very rough time at Tarboro last week. managing just 33 total yards, but Wilson ended his career with 493 carries for 4,021 yards. He added 762 receiving yards on 53 catches. He scored 67 touchdowns.

Wilson finished as the No. 7 all-time rusher in Rowan County. He’s second behind JaReke Chambers (4,769 yards, 71 touchdowns) in North history.

West Rowan Jalen Houston’s career stats took an unusual turn as a senior when he was switched to running back. He finished a four-year varsity career with 118 receptions for 2,581 yards and 277 carries for 2,148 yards. He scored 54 touchdowns.

Houston finished up with another workhorse 100-yard rushing game and a touchdown in West’s 42-7 loss to Charlotte Catholic.

Houston made the all-time list in the county for both rushing yards and receiving yards.

He ranks ninth in county history in receptions and fourth in receiving yards. He’s second in West history (behind Kortez Weeks) in both categories.

Salisbury doesn’t have anyone with the crazy numbers of Wilson and Houston, but the Hornets will be playing again tonight.

Seventh-seeded Salisbury (12-2) will be in the Tigers Den at top-seeded Randleman (13-0) for the 2AA East regional final. It will be the biggest game played by a Rowan County football team since South Iredell rallied to beat the Hornets in a 2012 regional final played at Ludwig Stadium and went on to win a state title.

Salisbury has allowed a meager 8.3 points per game with a defense led by three special players — Zae Clay and Jabril Norman in the middle and Jalon Walker on the edge.

Salisbury’s offense isn’t as powerful as its defense, but it’s still well above average. The Hornets average 27.9 points per game. The key guys as far as the skill positions are quarterback Vance Honeycutt, backs Mike McLean and JyMikaah Wells and receiver Patrick Taylor. The Hornets haven’t had large rushing totals against Washington and Hertford County the last two weeks, but they’ve gotten enough yards on the ground to stay balanced. Honeycutt has thrown for 275 yards in those two games. The wild card offensively is the 6-foot-3 Walker, who is playing more at receiver, provides a large target for Honeycutt and had three big catches last week.

Center Chad van der Poel is a leader on the offensive line.

Both head coaches in tonight’s game are former Catawba College assistants. They weren’t there at the same time, but they know each other very well.

Shane Handy grew up in Randleman, a Randolph County town known mostly for racing legend Richard Petty. Randleman isn’t as rural as you might think. It’s only about 20 miles south of  Greensboro, and the school has plenty of athletes.

After high school, Handy went to nearby Guilford College in Greensboro to play football and baseball. He helped the Quakers win championships in both sports.

While he was playing football at Guilford, he became best friends with a receiver from Raleigh named Chip Hester.

After graduating in 1992, Handy and Hester embarked on coaching careers. Handy would earn a masters degree as a graduate assistant at Delta State University. He coached at a lot of places, including Randleman, Webb High in Oxford, South Davidson and South Brunswick. When Hester was elevated from assistant to Catawba’s head coach in December, 2001, Handy made the move to join him on the Catawba staff as defensive coordinator and inside linebackers coach. Handy’s wife, Monica, was a counselor in the Salisbury schools.

Handy moved on to Ouachita Baptist University in Arkansas as defensive coordinator after the 2005 season, but he couldn’t resist the opportunity to return home in 2008 and become Randleman’s head coach. That’s where he’s been the last 12 seasons, building a terrific program.

“Shane does a tremendous job,” Salisbury head coach Brian Hinson said. “His team will be as well-coached and sound as anyone we’ve seen.”

Hinson’s hometown is Star, a very small town (876 residents according to the 2010 census) in Montgomery County.

Star is 30 minutes south of Randleman, so Friday’s game will be a virtual homecoming for Hinson. The Montgomery Herald has contacted him and is planning to cover tonight’s action.

Hinson’s coaching path took him to North Rowan as an assistant. Then he headed to Coastal Carolina to join Bennett. He earned a masters degree in elementary education.

SHS was 3-8 in 2016, the year before he arrived. Salisbury went 7-4 and 7-5, with first-round playoff losses in Hinson’s first two seasons, before taking a massive jump this season.

Hinson said Roger Secreast, the head coach during Hinson’s time at North,  would be offering his counsel this week.

Most of the hype about tonight’s game concerns Randleman’s offense, which averages 42.5 points per game, against Salisbury’s punishing, havoc-creating defense.

Just about everyone agrees Salisbury hasn’t faced an offense as good as Randleman’s. They also agree Randleman’s offense hasn’t encountered a defense quite like Salisbury’s. That irrestible force vs. immovable object stuff is always intriguing. That confrontation tonight should provide entertainment well worth the $10 admission price.

Handy is a great believer in balanced offense, but as this season has progressed, the Tigers have become a running team.

The Tigers lost a fantastic offensive player, reigning conference player of the year Jaquan Snipes, to a broken arm, but sophomore tailback Na’heim Lilly (5-10, 185) has become a superstar. Lilly has rushed 243 times for 2,207 yards and 30 touchdowns. His season low is 117 rushing yards and he’s had five 200-yard games. In the toughest games, the Tigers have put things in Lilly’s hands.

“They run it really well,” Salisbury cornerback Max Morgan said. “Lots of power, lots of counters. And they’ve got two quarterbacks. One that’s really athletic and one that throws.”

If the Hornets can make the Tigers throw it more than they want to, athletic 6-3 junior QB Coby Price takes center stage for the Tigers. He’s thrown for 1,148 yards and 13 TDs.

While 95 percent of the pregame talk has centered on Salisbury’s defense against the Tigers’ offense, Salisbury also has to figure out a way to score some touchdowns against a Randleman defense that allows 12.3 points per game.  That side of the ball is just as important.

“Randleman’s defense is athletic and their guys really get off the ball,” van der Poel said. “As an offensive line, we have to stay low and maintain blocks. We’re going up against a really well-coached team.”

Both defenses have actually been even tougher than it looks on paper. Their “points allowed” totals include the offensive and special teams accidents that took place while they were on the sidelines. The 35 Salisbury “allowed” in the ugly loss at Oak Grove is misleading, as the Hornets basically handed the Grizzlies three touchdowns.

Salisbury is traditionally a running program, so Honeycutt’s 1,376 passing yards (in 12 games) is the second-highest total in school history. Taylor has had one of the biggest receiving seasons in school history. McLean and Wells have combined for 26 touchdowns, and Honeycutt is an exceptional runner for a quarterback. He’s contributed 600-plus yards.

The teams have faced only one common opponent. Both were able to handle a tough Ledford team.

It shapes up as a dream matchup, with the winner moving on to face the Shelby-Burns winner for the state championship in a game that will be played at Wake Forest University.

Most everyone believes Salisbury has faced the tougher schedule. The Massey Ratings have Randleman as a 3-point favorite, with a score projection of Randleman 20, Salisbury 17.

Scott Maddox, generally the voice of doom, likes Randleman in this contest. Marny Hendrick, always the voice of optimism, sticks with the Hornets. I’ll go with Salisbury to make it to the championship game.