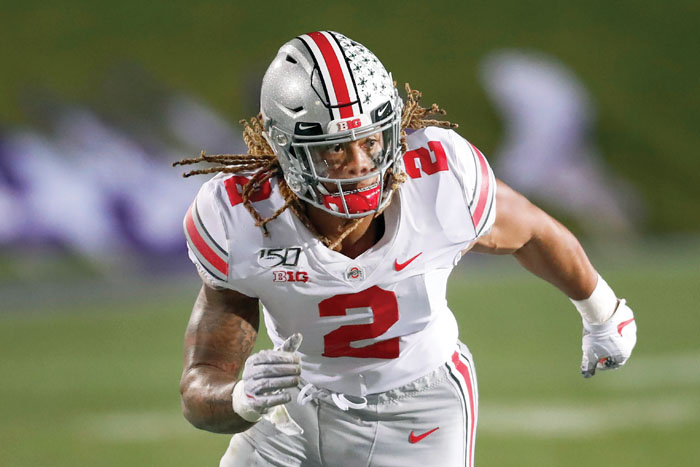 By RALPH D. RUSSO AP College Football Writer
The Heisman Trophy chase and playoff race have become intertwined.
Since the College Football Playoff started in 2014, four of five Heisman winners have played on teams selected to play in the semifinals. That makes championship weekend especially important as voters focus on contenders making closing arguments.
Presumptive front-runner Joe Burrow of LSU heads into the Southeastern Conference title game against No. 4 Georgia with what seems like a commanding lead in the Heisman race. Who will join the Tigers’ quarterback as finalists when the trophy is handed out Dec. 14 is still unclear. The real race is likely for second place.
Oklahoma quarterback Jalen Hurts, Wisconsin tailback Jonathan Taylor, Utah quarterback Tyler Huntley and a handful of players from Ohio State and Clemson may be able to use conference championship games this weekend as springboards to New York.
‘”It certainly has become much more impactful,” said Heisman historian Chris Huston, who runs Heisman.com for the Heisman Trust.
Since 2014, 14 of the 17 Heisman Trophy finalists have played on championship weekend. The Heisman hopefuls who aren’t playing on the final weekend before votes are due need to have been especially spectacular — think Lamar Jackson from Louisville in 2016 — or they will be forgotten.
“‘Because of the attention on the playoff it’s become ‘the best player on one of the best teams’ and that’s a lazy way of doing it,” said Heisman voter Brett McMurphy of Stadium.
This season, there are 926 members of the media and former Heisman winners voting for the award. The trust asks voters to submit their top three in order. Most votes are cast online. The deadline is Monday afternoon and the finalists are announced that night.
In the latest Heisman straw poll conducted by The Athletic, Burrow received 50 of 51 first-place votes. Ohio State quarterback Justin Fields was second, followed by Buckeyes defensive end Chase Young, Hurts and yet another Buckeye, running back J.K. Dobbins. Auburn defensive tackle Derrick Brown (seventh) did best among those not playing this weekend.
The playoff’s influence on Heisman voting has amplified a trend that started with the Bowl Championship Series, which decided the national champion from 1998-2013. During those 16 seasons, 10 Heisman winners played for teams that made the BCS championship game, including 10 of the last 14. Teams that played for the BCS title accounted for 27 of the 71 finalists (38%) over that period.
Two notable exceptions were Johnny Manziel of Texas A&M in 2012 and Robert Griffin III of Baylor in 2011. Both of those teams entered November with multiple losses, but had stellar final months, highlighted by memorable victories in high-profile games. Johnny Football and the Aggies knocked off No. 1 Alabama. RGIII and the Bears beat No. 5 Oklahoma, snapping a 20-game losing streak to the Sooners.
So if you are not in the national championship mix, scrambling the race late in the season can get the attention of Heisman voters.
Not showing up at all in The Athletic’s straw poll was Alabama star Tua Tagovailoa. The junior quarterback has missed a third of the season (three full games, two halves) because of injuries but is easily among the best players in the country.
He leads the nation in efficiency rating at 206.93, which will break the single-second NCAA record he set last year. Tagovailoa is second in yards per attempt at 11.3, behind Hurts at 11.7. His 33 touchdown passes is tied for fifth in the nation and at 315.6 yards passing per game, he is fourth.
”Will I consider Tua? Yes. But his injury is a major, major negative point,” said Matt Baker from the Tampa Bay (Florida) Times. ”I’ve voted for players who have missed games due to injury before but only when their overall body of work was so overwhelmingly positive that I could look past an absence or two.
Baker’s position was echoed by several Heisman voters contacted by AP. Others had already made up their minds.
“”The injury makes him a nonfactor in my mind,” said Robert Cessna of the Bryan-College Station (Texas) Eagle.
Baker also noted that Ohio State’s Young was in a similar position “for a different reason.” Young missed two games (both blowouts by the Buckeyes) because of an NCAA violation.
McMurphy believes the trust should expand Heisman voting to a top five and have a minimum of five finalists every season. Currently, the minimum is three and others are determined by voting margin.
“‘I’m not a participation trophy guy, but here you have a chance to promote the sport,” McMurphy said. “‘It won’t have an impact on who wins and it will allow other schools and players to be showcased.'”
___
Follow Ralph D. Russo at https://twitter.com/ralphDrussoAP and listen at https://podcastone.com/AP-Top-25-College-Football-Podcast
___
More AP college football: https://apnews.com/APTop25CollegeFootballPoll and https://apnews.com/Collegefootball and https://twitter.com/AP_Top25

Jerry Jones tries everything, but Cowboys can’t get it…