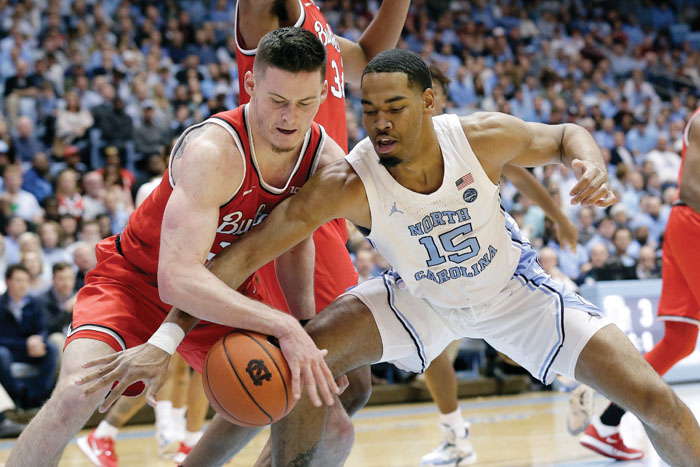 By AARON BEARD AP Basketball Writer
CHAPEL HILL (AP) — Duane Washington Jr. had 18 points and No. 6 Ohio State shot 54% after halftime to beat No. 7 North Carolina 74-49 on Wednesday night, handing the Tar Heels their most lopsided home loss under Hall of Fame coach Roy Williams.
E.J. Liddell added 12 points for the Buckeyes (8-0), who led just 29-27 at halftime. But Ohio State’s offense started knocking down shots while the defense continued making things difficult on the Tar Heels (6-2) just as in the first 20 minutes.
Ohio State outscored UNC 35-13 over the final 15 1/2 minutes to break the game open in the ACC/Big Ten Challenge. The lead steadily grew until the Buckeyes had surpassed last January’s 83-62 win by Louisville here that stood as the Tar Heels’ worst in the Smith Center under Williams.
Cole Anthony scored 15 points to lead the Tar Heels, though he had to leave briefly during the first half when he sustained a cut near his hairline while being fouled, leaving blood running down the center of his forehead. North Carolina shot just 27.4% and played much of the way without freshman big man Armando Bacot, who exited in the first half with a left ankle injury.
The Tar Heels were returning home from a third-place showing in the Battle 4 Atlantis tournament in the Bahamas, ending with probably their best complete-game performance to grind out a close win against No. 13 Oregon. Yet Williams said Tuesday the Tar Heels aren’t playing at a fast enough tempo and their offense, putting it simply, “is not very good.”
That unit found itself up against one of the nation’s toughest defenses in this one. And things only got more difficult when the 6-foot-10 Bacot crumpled to the court after a tip-in at the 12:48 mark, writhing in pain before being helped off by two teammates while putting no weight on his injured ankle.
Ohio State finished with a 48-32 rebounding advantage and had four players score in double figures.
BIG PICTURE
Ohio State: The Buckeyes have been dominant since a 64-56 win against Cincinnati to open the season. They had won their past six games by 19 or more points, including a 76-51 victory against No. 23 Villanova. And they arrived ranked second nationally in KenPom’s adjusted defensive efficiency by allowing 84.6 points per 100 possessions. Overall, opponents had shot 32.9% on the season for the third-best defensive average in the country — and the Buckeyes didn’t make things much easier on the Tar Heels.
UNC: The Tar Heels are in the midst of a brutally tough stretch of the schedule. They lost to now-No. 4 Michigan in the Battle 4 Atlantis before holding off the Ducks, then returned home for this top-10 matchup. Now they’ve scored fewer than 80 points in each of their first eight games for the first time since the 1949-50 season.
UP NEXT
Ohio State: The Buckeyes host Penn State on Saturday in their Big Ten opener.
UNC: The Tar Heels visit No. 5 Virginia on Sunday. The defending national champions got blown out Wednesday night at Purdue.
___
More AP college basketball: https://apnews.com/Collegebasketball and https://twitter.com/AP_Top25
___
Follow Aaron Beard on Twitter at https://twitter.com/aaronbeardap