‘The Body’ a wonderland of mystery 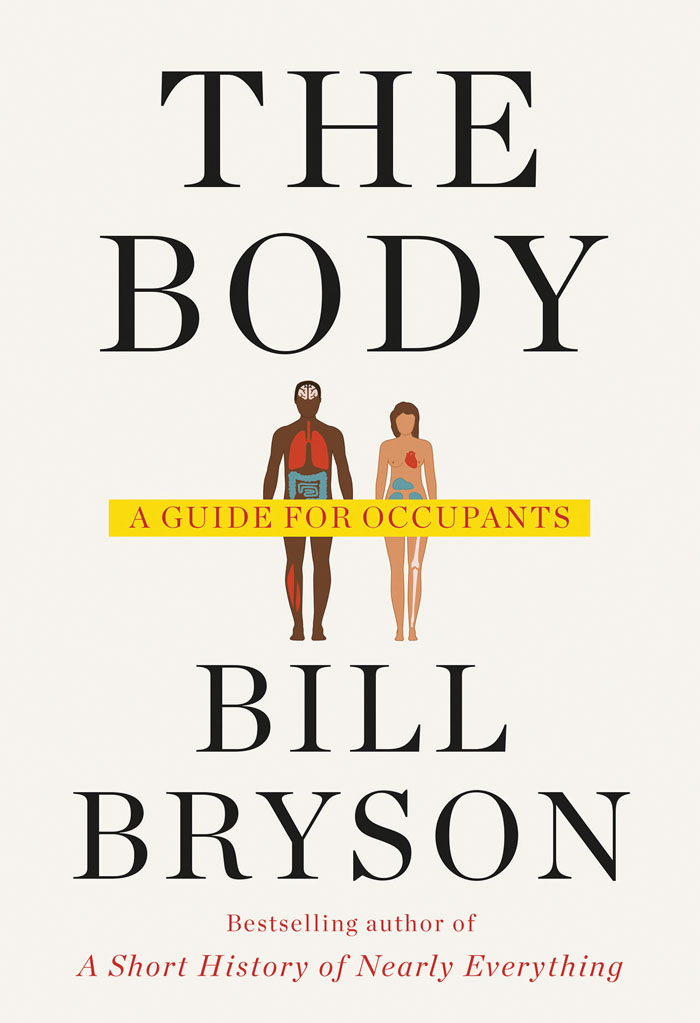 Here’s the book to give to people who are hard to buy for: “The Body: A Guide for Occupants,” by Bill Bryson.

It’s a whopper, more than 400 pages, and it is so thoroughly researched that 37 pages contain notes on his sources, plus there’s a complete index.

He did his homework, then. And this is the book you read in fits and starts, preferably with someone else in the room so you can tell them the amazing facts Bryson is sharing, like “each of us contains about thirty trillion human cells and between thirty and fifty trillion bacterial cells.”

The next time you want to pose a bar bet, ask if everyone has fingerprints. Well, no, some people are born with “completely smooth fingertips, a condition known as adermatoglyphia.”

And when you wonder why that young person is so impulsive, so non-sensical, there is a perfectly good reason: “ A teenager’s brain is only about 80 percent finished (which may not come as a great surprise to the parents of teenagers). Although most of the growth of the brain occurs in the first two years and is 95 percent completed by the age of 10, the synapses aren’t fully wired until a young person is in his or mer mid- to late twenties.”

Such is the stuff that fills this book, in which Bryson and the scientists he read about, interviewed or studied debunk myths and present fascinating facts that are sometimes beyond comprehension.

Pick a random chapter and read. Maybe all you care about is the brain or “Nerves and Pain.” Dive in and see what Bryson has discovered.

He’s rather like a kid in a candy shop with his discoveries. He maintains a fairly sober tone, but it’s obvious some of what he has learned delights and astounds him.

The book is incredibly readable, told almost as a narrative, and Bryson takes the reader through system by system. All the while, he repeats that we actually know very little of this body we inhabit, and we’ve been wrong about an awful lot of things. Badly wrong. Blood letting never cured anyone of anything, and was likely why George Washington died of what could have been a simple throat infection.

Blood transfusions, bizarrely, began with sheep’s blood being given to humans. A little is all right, but as the experiments became more intense, and more foreign blood was introduced, people began to die. But one researcher did get blood types right, and explained why some are not compatible with others.

The biggest part of the body about which we know little is, of course, the brain. We do know that only the thin outer layer is responsible for most of our seeing and feeling, but there are other parts whose functions remain a mystery.

We don’t see color. Our eyes perceive light and our brains transform it into color. In fact, our brains interpret so much of the world for us that it could be said you can’t believe what you see. Your brain has to teach you.

The facts are often alarming, or confounding. It’s a wonder we function at all when there are so many systems doing so many things. Maybe you don’t know the value of pi or what an isosceles triangle is. But your brain is telling you what those strokes are that make numbers. Your skin is perceiving the cold air of the classroom, and your heart is madly pumping blood all over your body — well, less in the seat and legs if you’re sitting down.

Perhaps one of the most significant discoveries Bryson made is one scientists have known for a while. All your skin pigmentation is in a layer of your epidermis that is about a millimeter thick. When we say something is skin deep, we don’t realize how shallow that is.

Pigmentation developed depending on where we lived. In hot climates with more sun than shade, the skin pigment became darker, to help protect us from the unrelenting rays. In northern climes, where ice and snow are more common, we did not need darker skin to protect us from the sun — the sun is much farther away and indeed, almost invisible for months.

Blue and green eyes are due to a lack of pigmentation. Most eyes should be brown, again, to protect us from our climate.

The melanin that colors our skin is also responsible for the color of bird feathers and squid ink. Who knew?

Doctors, scientists, researchers owe a debt to Bryson, who names names, calls out the scofflaws and exposes the ignorant. Credit is given where credit is due, and Bryson follows a path that might have started out badly up to the point the real discovery is made and confirmed.

A section of photos in the middle of the book includes such things as a picture of Auguste Deter, the first person to have been diagnosed with Alzheimer’s disease by Alzheimer himself. There’s a photo of Nettie Stevens, who discovered in Y chromosome in 1905. Werner Forssmann is shown, as well. He fed a catheter into an artery in his arm to see if he could reach his heart.  In 1956, he won a Nobel Prize for his research on the heart.

A few of the pictures are a bit gruesome, but show how far we’ve come in the world of medicine.

The chapter on pain is particularly interesting. On one hand, pain is an important message our body sends. We react before our brains can even process what is going on. But for many, pain is neverending and untreatable. Irene Tracy, who has studied pain for more than 20 years said pain is a paradox: “When most parts of the body are damaged, they stop working — they switch off. But when nerves are damaged, the do exactly the opposite — they switch on. Sometimes they just won’t switch off, and that is when you get chronic pain.”

Science has yet to figure out how to turn the volume of that pain down.

“The Body”, if you’ll parson the pun, is easily digestible and great food for thought. It’s just the kind of book you can annoy your friends and family with, and they just might learn something.