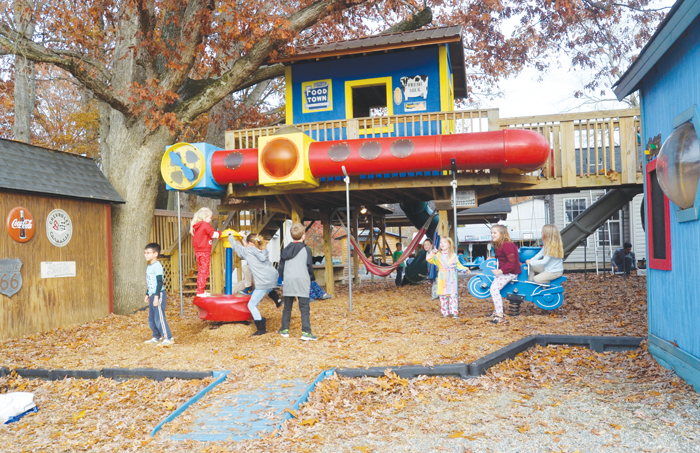 SALISBURY — Rhonda Stirewalt Roseman always has one more idea in the works for Happy’s Farm, a western-themed tutoring center in Salisbury.

In 2007, she turned a family farm into a western oasis for children complete with a candy shop, beauty and barber shop, post office, and playground.

The nonprofit organization was established by Roseman, a former math and science teacher for Rowan-Salisbury Schools. Her goal was to have a relaxed, western town setting in which children could have access to affordable academic tutoring and child care.

The farm is named after Roseman’s great-grandfather, William “Happy” Trexler, the first owner of Happy’s Lake.

Happy’s Farm opened in late 2007 with just three students in its tutoring program. In January 2010, the farm became a nonprofit organization and now has more than 60 children in the tutoring and after-school program. Happy’s Farm is at 985 Parks Road.

“I love that they treat the kids like their own,” said parent Elizabeth Snelbaker.

Snelbaker said the care that the organization provides extends to the parents as well. Once when Snelbaker arrived to pick up her son, Alden, she appeared upset. She later received a call from Roseman just to make sure she was OK.

Jaylea Hughes, 17, another regular participant, has been with the program since she was 8. The best part for her is meeting new friends, she said.

“She loves children, and the children need a good, safe place to be,” said Roseman’s mother, Stella Stirewalt.

Roseman said her mother spoils the children. Stirewalt says some of them deserve to be spoiled.

A few years ago, Roseman built a kitchen and movie screening room with the help of local donors. Roseman has also incorporated military memorabilia in a tunnel on the property. She added a wheelchair ramp to make the facility more handicapped accessible.

Volunteer turned staff member Shanna Matlock has found it a joy to spend time at the farm with the children. Matlock works with the summer camp and after-school program.

Local artist Cherrathee Hager has created multiple murals and wooden character cut-outs that can be found throughout the farm. She’s working on a welcome sign that will greet visitors and a D-Day exhibit that will be revealed soon.

Roseman has a number of upcoming projects for the holidays that are open to the community. From 4 to  8 p.m. Saturday and Sunday, the farm will host Happy’s Farm Storybook Christmas. The cost is $5 per person.

Admission includes a horse ride; cotton candy; a hot dog with trimmings and a drink; a tour of light displays and decorations; Happy’s Express Train hay wagon ride for children and adults through the Salute to Freedom Outpost; a view of the new D-Day exhibit; Cress Express Train Ride for children; and a dime toss, cupcake walk, cactus ring toss, ring toss, and a football throw.

Those who win at game stations can earn “Happy Bucks” to spend at Grace’s Country Cupboard for toys and other goodies.

Roseman is in the middle of the Keep Rowan County Warm Project, which is an opportunity to provide gently worn children’s or adult coats for area residents. Those who bring a coat will receive an autograph of former NFL players Rod Smith and Hutch Eckerson.

Visitors will see the new D-Day exhibit, which is a replica of the beach scene at the Battle of Normandy and features an 11-by-32-foot battleship mural.

Another new exhibit is the replica of the “Andy Griffith Soow” law enforcement building that includes the farm’s own “Barney’s police car,” a restored and painted golf cart.

For more information and how to contribute to the organization, contact Rhonda Stirewalt Roseman at 704-279-5268.