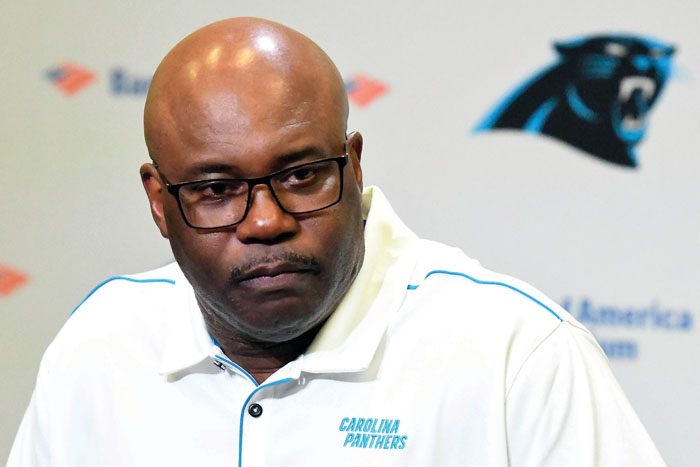 The same is true for NFL coaches.

The Falcons (3-9) have been eliminated from playoff contention. Quinn took the Falcons to the Super Bowl in 2016 and another playoff berth the following year. This season will be his second straight with a losing record.

White, the Falcons’ all-time leader in receptions, will be inducted into the team’s Ring of Honor on Sunday. His 11 seasons with Atlanta included Quinn’s 2015 debut season.

“I think Dan is a good coach,” White said Wednesday. “I really have respect for him and the things he’s done for our organization.”

White is an assistant coach at Johns Creek High School in the Atlanta area. He said he has “zero” interest in becoming an NFL coach. One reason is the instability of what he said is “a win-now league.”

The latest example of impatience came when Panthers owner David Tepper fired  Rivera, who has the most wins of any coach in Carolina history (76-63-1 in the regular season).

Fewell was Carolina’s secondary coach before being named interim coach. Four straight losses left the Panthers (5-7) on the brink of elimination from the playoff race and prompted Tepper to move on from Rivera so he could begin searching for the next coach.

Fewell was interim coach in Buffalo in 2009.

“It helps that I’ve done this before,” he said. “I have this experience, so I know where to go, what to do and how to do it.”

Quinn has been unable to fix such nagging problems as a poor running game, leaky protection for quarterback Matt Ryan and an inconsistent pass rush. Ryan was sacked nine times in last week’s 26-18 loss to New Orleans.

The Falcons hope that sweeping the season series with the Panthers could be the start of a strong finish to a disappointing season. It’s not known if that would be enough to save Quinn’s job.

Buried in the news of Rivera’s firing was that Tepper promoted quarterbacks coach Scott Turner to offensive coordinator and play caller. Turner replaces his father, Norv, who was removed from the role and will serve as assistant to the head coach. There won’t likely be wholesale changes to the Panthers’ offense, but Scott Turner will hope to be more successful than his dad in the red zone. Carolina’s struggles near the goal line were a big factor in four losses this season.

Falcons wide receiver Julio Jones returned to practice this week after missing last week’s game with a shoulder injury. It was the first game Jones missed since 2016. He hasn’t had a touchdown catch since Week 3. Jones’ expected return would come one week after running back Devonta Freeman made his return after missing two games with a sprained foot.

Fewell announced season-ending foot surgery for Cam Newton this week. There has been no talk of playing third-round draft pick Will Grier, and Fewell said the Panthers will stick with second-year quarterback Kyle Allen against Atlanta. Allen is 5-5 as a starter, but has lost five of his last six starts. He threw four interceptions and was sacked five times in last month’s loss to the Falcons.

Ryan said the Falcons haven’t given up on the season. “I think the mindset has been good,” he said. “We’ve got a good group of guys in this building that are committed to one another and committed to trying to play well for one another.”

The Panthers’ poor run defense helped lead to Rivera’s exit. Defensive coordinator Eric Washington is expected to take over the play calls against Atlanta with some input from Fewell. Significant improvement may be difficult with defensive tackles Dontari Poe and Kawann Short on injured reserve. The Panthers are allowing 137.5 yards per game on the ground and have surrendered a league-high 22 touchdowns rushing. That could be good news for Freeman, who is still looking for his first rushing TD of the season. Carolina has also allowed 18 run plays of 20 or more yards.

After averaging 405 yards offense and 36 points in winning their previous seven games, the Ravens hit a speed bump in the form of the San Francisco 49ers. Though Baltimore eked out a 20-17 win on a rainy, windy afternoon on Justin Tucker’s 49-yard field goal as time expired, Phillips took note how the 49ers limited Baltimore to 283 yards offense, including 125 in the second half.

“When San Fran’s defense got going, that’s all I needed to see,” Phillips said. “That put things in perspective.”

If the NFL’s top-ranked defense could put a dent in the run-and-gunning Ravens (10-2), then why not the Bills (9-3) on Sunday, when the two AFC playoff contenders meet at Buffalo.

“We’re built for an offense like this,” Phillips said of a defense that’s allowed the third-fewest yards in the NFL this season. “Now, we just have to go out there and execute. Simple as that.”

Simple might not be the operative word when confronting Jackson’s dynamic ability. The second-year starter leads the league with 32 touchdowns (25 passing) and oversees an offense that has scored a league-leading 49 TDs. Baltimore has an opportunity to become the first in NFL history to finish a season averaging both 200 yards rushing and passing.

The Bills defense appears to have cleaned up its issues against the run. Since allowing 492 yards over a three-game stretch, Buffalo has given up 211 — including 103 in a 26-15 victory at Dallas on Thanksgiving Day — in winning its past three.

Promising as that might sound, defensive coordinator Leslie Frazier knows he’s got his hands full in preparing to face a quarterback he compares to Michael Vick.

“Once he got out in the open field, there was really no catching Michael,” Frazier said. “And it’s similar when you’re watching Lamar.”

“It seems like they have a ton of confidence in their ability to run the ball on anybody,” Frazier said. “They play with a bravado about them, and I’m sure that has a lot to with their head coach.”

Harbaugh’s confidence in Jackson was apparent when asked whether he believes any defense can stop him.

“Well, I don’t know what it means exactly,” Harbaugh said. “If it means that they’re going to solve him as a player or shut him down, no. I don’t think that’ll ever happen until he retires, because he’s that good.”

The challenge, Harbaugh said, is continuing to adapt his offense to stay a step ahead of opposing defenses.

A number of things to look out for in a game that also features Bills quarterback Josh Allen, who was selected seventh overall in the 2018 draft, 25 spots ahead of Jackson:

The Ravens can clinch the AFC North with a win and a Steelers loss or tie. They can also clinch with a tie and Steelers loss.

The Bills can clinch their second playoff berth in three years with a win and an Oakland loss or tie, an Indianapolis loss or tie, and a Houston loss.

Jackson recalled playing cornerback in youth football when he was burned by Bills rookie running back Devin Singletary.

“He was like a little stocky, cocky running back and I’m like `I’m not about to hit him by myself,’ so I tried to brush him off, and he just ran up the sideline and scored,” Jackson said.

Ravens punter Sam Koch hasn’t seen much action. With Jackson guiding a relentless offense and Baltimore going for it on fourth down 19 times, Koch has only 24 punts this year.

That doesn’t mean he’s been taking it easy. One of his two punts last week was downed at the 1 by Chris Moore. Koch also serves as holder for Tucker, who hit two field-goal and two extra-point attempts.

McDermott confirmed a report by NFL.com of the Bills placing a waiver claim for kicker Chase McLaughlin, only to lose out to Indianapolis, which was higher in the claim order.

“It’s just like any position, us continuing to try to add a player to our team that we feel could help us,” McDermott said.

After winning five straight by a combined 202-62 margin, the Ravens had to squeeze past San Francisco. Baltimore held the ball for the final 6 ½ minutes before Tucker’s field goal. The 3-point margin of victory was the smallest for Baltimore this year.

“These games are needed,” defensive tackle Michael Pierce said. “When you’re trying to go on a run and get to the playoffs, you never expect a blowout. You need to be in those tight games to see how players respond at some point.”