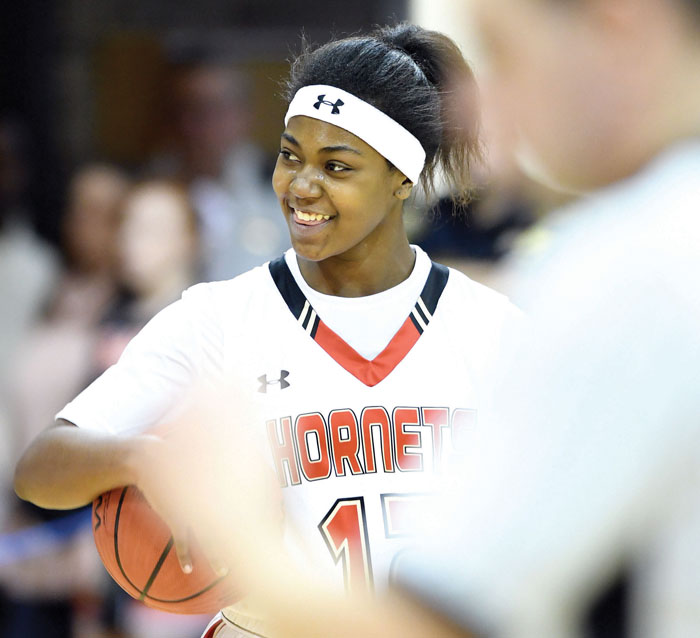 SALISBURY —  For a pass-first point guard, even for one who’s been pretty special for four seasons, it’s a grind to reach 1,000 career points.

“It took some time,” Salisbury senior Anayia Fulson said, with a smile. “But I wanted to get it and my teammates really wanted me to get it.”

Fulson finished her junior season with a fourth-round playoff loss to Forbush that ended a 25-5 season. She had 987 points, but she had to wait eight months to complete her quest.

She’s the 12th Salisbury girl to reach 1,000. She achieved the milestone opening night this season when she scored 13 against Thomasville.

Fulson received a ball to remember the occasion. Her mom brought a cake. The Hornets celebrated after the game with spaghetti.

The 5-foot-8 Fulson comes from a family of athletes — lots of Phifers and Rankins. Her mother, Sherree Gillespie, was a terrific player for coach Jennifer Shoaf during lean seasons (1997-2000) for the Hornets, when they were getting pounded in the Central Carolina Conference by powerhouses Ledford and High Point Central. Gillespie toiled for squads that usually only won six or seven games, but she managed to pile up 1,398 career points. When she graduated, she was No. 2 in SHS history.

On opening night of her senior year, Gillespie scored 33 of Salisbury’s 48 against West Rowan. She averaged 21.7 points as a junior and 19.7 as a senior. She went on to play college ball at Livingstone.

“They tell me when I was a baby that my mother would take me with her to the Livingstone court,” Fulson said. “As I grew, I started running all around the place with a basketball. I guess that’s where the love of basketball came from. I started young.”

Fulson would also start young for the Hornets — as a freshman for current coach Lakai Brice.

“She’s always been a joy to coach,” Brice said. “She’s a great athlete and could be a really excellent soccer player if her main thing wasn’t basketball. She can handle the ball, she can pass, and she can score. And there aren’t many players who are as good as she is offensively that will also take on the challenge of guarding the other team’s best player. But she takes those defensive challenges. She’s slowed down a lot of big scorers.”

Fulson has played alongside good scorers — Tyzarea Alexander, Maria Capito, Bryanna Troutman (who ranks third in Salisbury history with 1,614 points) and now sophomore Rachel McCullough. Fulson always has been the second or third scoring option, but she’s been amazingly consistent — 302 points as a freshman, 348 as a sophomore and 337 as a junior.  She’s been all-county second team the past two seasons.

With Troutman moving on to Wingate — and doing extremely well — this is Fulson’s team. She’s always been that person who scored 11 or 12 and kept the offense humming, but now the Hornets are going to need 18 or 20 from her to win the big games.

“She’s always had the ability to score more, but she’s been comfortable in that role of facilitator and everyone who has ever played with her has loved her,” Brice said. “Anayia told me that this year she’s going to keep passing, like always, but she’s also going to score more.”

She has the ability to score in a lot of ways. She’s an athlete with the size and strength to drive, and she also has the speed to push the ball and finish in  transition. She’s a streaky 3-point shooter, who can get really hot. She made a solid 37 percent from long range as a junior. She also is capable of doing more at the foul line. She shot 58 percent on free throws last season and has the stroke to be more efficient there.

Salisbury has three freshmen in prominent roles, but has gotten off to a 3-0 start, with two Central Carolina Conference wins.

In the Hornets’ first three games it’s been 13, 16 and 13 points for Fulson, but all three have been relatively easy outings.  Fulson hasn’t had to really turn it on yet. She’s even gotten to sit down early some and watch the reserves finish teams off.

“Anayia is very capable,” Salisbury assistant Robert Hairston said. “There’s a lot more in her that people haven’t seen yet.  She’s very unselfish, by nature, but she’s a senior now, and sometimes when you’re a senior you have to do what has to be done. You have to take control.”

Fulson will be a next-level player, although where that will be is still up in the air.

“She’s got a college-ready body, she’s strong,” Brice said. “She’s not one of those girls who’s going to have to build themselves up after they get to college.”

For now, Fulson isn’t worried about anything except having a great high school season. She’ll play the season and see what happens as far as recruiting options.  She’ll pass a lot, smile a lot and will take it to the hoop when the Hornets need her to take over for a young team.

“Basketball means so much,” Fulson said. “You can do a lot with basketball. You can build a family with basketball. The girls on this team, we still hang out together when we’re off the court. Every one of my teammates is my best friend.”