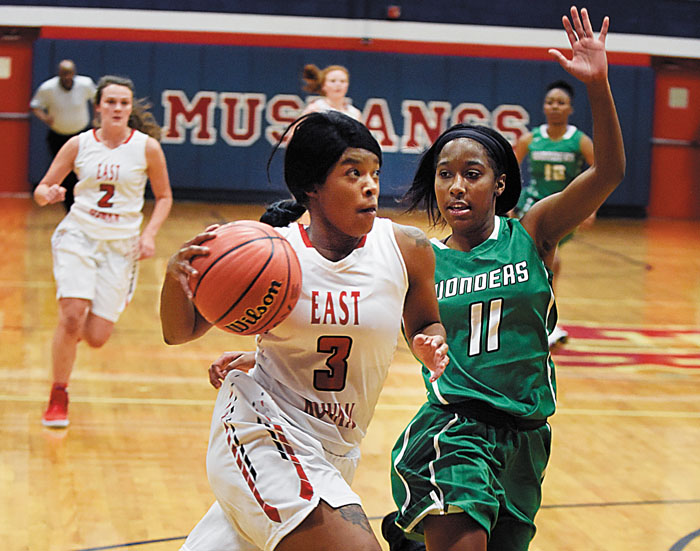 Wayne Hinshaw FILE PHOTO / FOR THE Salisbury Post ... A.L. Brown’s Jala Campbell (11) guards East Rowan’s Zee Winford (3), during a game from last season. Campbell returns for her senior year as one of the team leaders for the Wonders.

KANNAPOLIS —  Senior starters Jala Campbell, Jaliyah Simmons, Jaliah Smoutherson and Jillian Brim have been through a lot together.

The Wonders went 5-17, 4-18 and 7-18 in their first three seasons, but the first rays of sunshine started appearing last January under former head coach Doug Wilson. After an 0-15 start, the Wonders won seven of their last 10 and put together modest winning streaks of three in a row and four in a row.

That strong finishing kick, which included five South Piedmont Conference victories, is something the Wonders hope to build on under new coach Mark Hogan, a New York native. The math teacher, who has been part of A.L. Brown’s boys program, will be the Wonder girls’ sixth head coach in six seasons.

‘We’ve got a strong group of seniors,” Hogan said. “They’ve gone through a lot. They’ve shared a lot and have a lot in common. They’ve built a chemistry.”

The Wonders are off to a 2-2 start under Hogan, with road wins at Porter Ridge and Mooresville. They gave Carson a scare in a home loss.

Smoutherson, who averaged 6.3 points a junior, is off to a super start. She made nine 3-pointers and poured in 31 points of A.L. Brown’s 50 points to push Carson to the brink of defeat.

“She was incredible against Carson,” Hogan said. “She can shoot the ball.”

Campbell, a 5-6 guard,  is the leading returning scorer. She averaged 11.1 points per game. She topped 20 points three times last season — and the Wonders won all three. She opened this season with a 28-point outburst at Porter Ridge, but she only had seven against Carson in a game in which she was under the weather and in foul trouble.

“She gives us a post presence and she can score in the post or from the elbow,” Hogan said. “We can use her at any spot defensively and know she’s going to do a great job.”

Brim, 5-7, doesn’t score a lot, but she’ll be among the team leaders in rebounds and assists. She’s averaged six boards and six assists in the early games.

“She’s a facilitator and does a little bit of everything,” Hogan said.

“She’s extremely tough, she rebounds well, and she can finish,” Hogan said. “Her star is rising.”

Freshman Alannah Green is athletic and has a chance to provide some scoring punch.

Junior Keshara Grant will make an impact defensively. She had three steals on opening night.

Senior Annie Corpening does a good job on the boards.

The Wonders averaged 37 points per game last season, but they should be better offensively. They scored 64 opening night and put up 50 against a Carson team that holds a lot of teams in the 20s.

“I’m absolutely encouraged by the start we’ve had,” Hogan said. “Girls have bought in. They’re pushing each other. Our seniors have been great as far as being models for the young players in the program.”