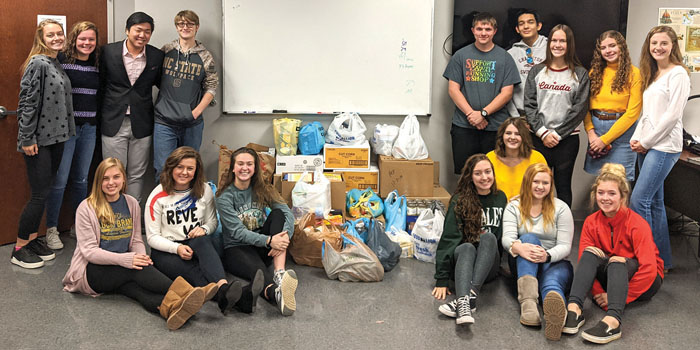 To raise school awareness, a “Battle of the Lunches” was held. Donations were collected in bins Nov. 18-22.

There are three lunch periods at Gray Stone, one each for sixth and seventh grades, eighth and ninth grades, and 10th through 12th grades. A separate bin was provided at each lunch period, and students brought cans to increase their score. Students placed boxes in other grade levels’ bins to decrease those scores.

Each night, student council publicist Chloé Bell sent out the scores for the grade levels, which spurred more involvement and motivation.

“There was some intense competition between the grade levels. I’ve never seen kids get so enthusiastic over metal cans and paper boxes,” Bell said. “It was awesome to see so much support for student council and our community service efforts.”

At the end of the last day, more than 800 food items were collected and donated to Rowan Helping Ministries. These were counted and collected by the student services committee on Nov. 22. The sixth- and seventh-graders brought in the most items and were rewarded with ice cream sandwiches on Nov. 26.

Middle schoolers showed their school spirit and dedication to the community with all the items they brought in.

“I thought it was very thoughtful,” said Grayson Hathcock, a sixth-grader, of the food drive.

Abby Harris, also a sixth-grader, said, “I think that it’s really good to do for those who don’t have any food.”

The food was delivered to Rowan Helping Ministries on Nov. 25 by a caravan of Gray Stone students and teachers. They filled multiple cars.

“This event turned out better than we had expected. Our goal was 400 items, but this was more than doubled with a total of 845,” said Ninaa, a student council member. “I’m impressed with our school’s dedication.”

The food drive was a schoolwide effort that showed thath a small amount of competition can go a long way, especially for a good cause. The grade levels battled it out but came together to help the community through Rowan Helping Ministries.

Gray Stone officials said they hope their efforts will help families have happier holidays in the coming weeks.