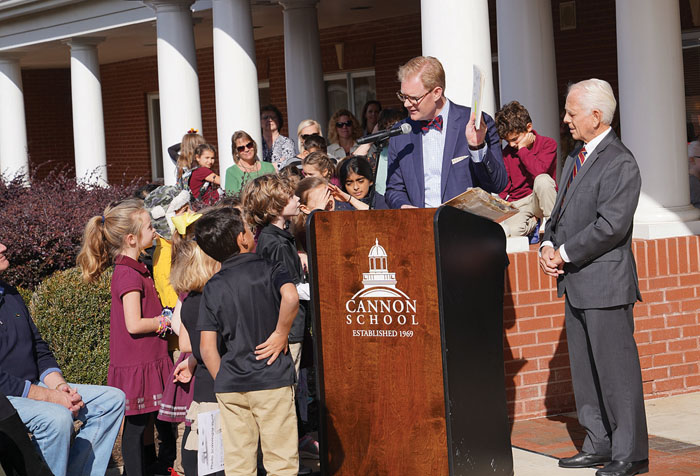 CONCORD – Cannon School unveiled a chapter of school history with the opening of a time capsule that students and faculty had placed behind a cornerstone in 1994 — the year the school moved from 65 Union St. to the present campus on Poplar Tent Road.

At that time, the school was still Cabarrus Academy.

The time capsule contained an array of historical artifacts, including a letter from Headmaster Richard Snyder, a newspaper article about the campus groundbreaking, a copy of Cabarrus Academy Cougar News, a copy of the 1994 Flashback yearbook, a student-parent handbook, an annual report, and the thumbprints of every Cabarrus Academy student at the time.

Also included were VHS tapes portraying what a school day was like at Cabarrus Academy.

In turn, a new time capsule was placed behind the cornerstone containing Cannon artifacts from today. These include a letter from Head of School Christopher Jones, photos of the Cannon School student body, the latest editions of Cannon Magazine and the Cusp student newspaper, an annual report, and memorabilia made in the Upper School makerspace, The Mill.

Also inside the new time capsule is a video detailing what life is like for Cannon students today.

A crowd was on hand to witness the time capsule unveiling, including former Headmaster Snyder, who placed the original time capsule behind the cornerstone 25 years ago. Also attending were friends and alumni of  Cabarrus Academy.