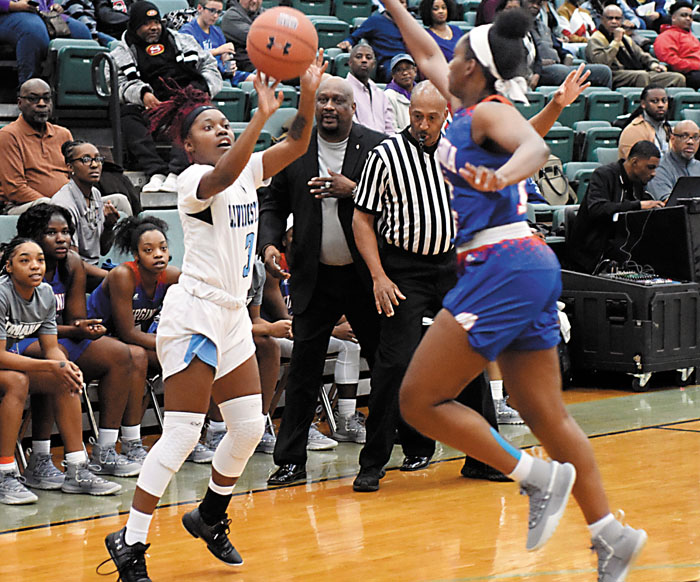 Allen connected on 5-of-8 attempts from the 3-point arc and added six free throws — playing 38 minutes.

The contest was a reunion, so to speak, for first-year Livingstone coach Chiante Wester, who served as an assistant for coach James Hill at Virginia State for 13 seasons.

With the victory, Livingstone improves to 3-3 overall and 1-1 in the conference. Virginia State falls to 5-4 and 1-2. The Trojans had won five in a row, after an 0-3 start.

LC jumped out to a 10-2 lead, as senior guard Daisa Harris scored her team’s first eight points, six coming on two 3-pointers. The Blue Bears led after one quarter, 15-8

Harris then went cold in the second period, but Allen stepped up with 10 points before halftime. Livingstone led at the break, 31-23, despite shooting just 38 percent (12-of-32) from the floor. The Blue Bears did make five 3-point shots.

Meanwhile, the Trojans had a dismal first half, going 0-for-6 from behind the 3-point arc and committed 12 turnovers. The Blue Bears turned the ball over just seven times in the first half.

Livingstone held a 44-36 advantage, going into the fourth quarter, but Daijah Turner immediately drilled a 3-pointer for the Blue Bears, for an 11-point margin.

From that point, the Blue Bears went on build as much as a 20-point lead, at 58-38. That score came with 5:30 remaining, on a fastbreak layup from Harris.

For the game, the Blue Bears blistered the nets from 3-point land, making 9-of-20 (45 percent). And LC limited its turnovers to 15.

The Trojans, however, committed 24 turnovers and made just 1-of-10 three-point shots.

Following Allen’s 23 points were Turner with 14 and Harris with 12. Victoria Onozie added 10 points. Darra Walker, who scored 25 points on Tuesday against Morris, was held to two points last night. Harris led the team in rebounding with nine boards.