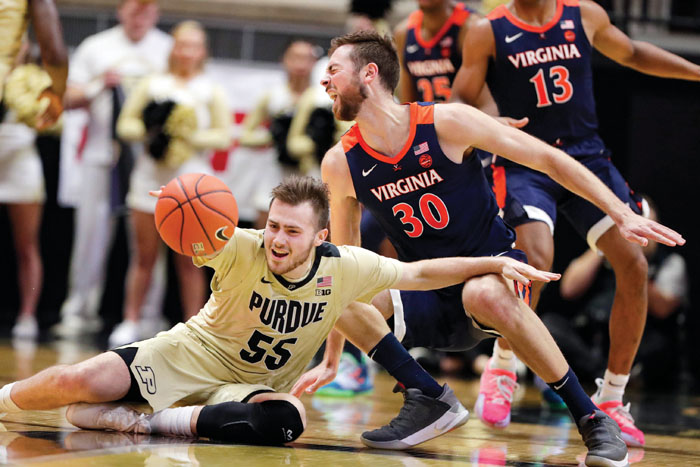 It’s the first time the Boilermakers have beaten a top-five foe from another conference in Mackey Arena’s 52-year history. The Boilermakers (5-3) have won four of five overall.

Jay Huff had 11 points and Mamadi Diakite finished with 10 for the defending national champions. But the Cavaliers (7-1) had their 13-game winning streak snapped in a rematch of last year’s Elite Eight game. They lost for the first time in eight road games dating to last season and produced their lowest point total since March 2017.

The game was billed as a showdown between two of the nation’s stingiest defenses, but Purdue dominated from start to finish.

After the teams opened the game with four straight baskets, Purdue dug in, locked down and seized control by using a 12-0 run over nearly seven minutes to take a 26-9 lead late in the first half.

Virginia never recovered. It got as close as 12 with a little more than a minute left in the half before things got worse.

And just when it appeared Virginia might make one last charge after it cut the deficit to 51-36 with 7:37 to go, the Boilermakers scored 16 in a row to run away.

Virginia: There’s no doubt the Cavaliers can play defense, but they need to find answers on offense. Virginia shot 37.2% from the field, was 4 of 24 on 3-pointers and had 16 turnovers. That’s not how coach Tony Bennett’s teams typically win games.

Purdue: Coach Matt Painter’s club appears to be hitting its stride — just in time for the start of conference play. The Boilermakers have won two straight over ranked teams, this time by beating Virginia at its own game.

GEORGIA TECH PULLS AWAY IN 2ND HALF, DEFEATS NEBRASKA 73-56

ATLANTA (AP) — Michael Devoe scored 26 points and Georgia Tech pulled away from Nebraska in the second half for a 73-56 victory in the Big Ten/ACC Challenge on Wednesday night.

Devoe was essentially a one-man team as the Yellow Jackets (4-2) seized control.

First, he stepped behind the arc to swish a 3-pointer. Then, he slipped inside for a putback after corralling an offensive rebound, leading to a Nebraska timeout that gave the guard a chance to flex his muscles on the way back to his own bench. Finally, Devoe drove to the hoop, banked one in and drew the foul for a three-point play that made it 53-42 with just under 11 minutes remaining.

Georgia Tech had a rare breather down the stretch after four of its first five games were decided by a total of nine points.

Nebraska (4-4), in its first season under coach Fred Hoiberg, couldn’t overcome 32% shooting which only got worse over the final 20 minutes.

COLLEGE PARK, Md. (AP) — Jalen Smith had 15 points and a career-high 16 rebounds as No. 3 Maryland cruised to a 72-51 victory over Notre Dame on Wednesday night in the ACC/Big Ten Challenge.

John Mooney had 17 points and 12 rebounds for Notre Dame (6-2), which had won six in a row since opening the season with a loss at North Carolina.

It took some time for the Terps’ offense to get going, but their defense was sharp for nearly the entire first half. After falling behind 9-4, Maryland allowed just four points over the next 12:31.

Ayala scored seven points in a row to turn a one-point game into a 21-13 lead, and later delivered a tomahawk slam a minute before the break. Aaron Wiggins capped the half by getting the carom from his missed 3-pointer and slamming it home for a 32-20 lead.

Notre Dame never cut the deficit to less than 10 in the second half as Maryland snapped a six-game skid in the ACC/Big Ten Challenge, a streak that began when the Terps were still in the ACC.

Notre Dame: The Irish missed out on the first of their three chances for a noteworthy nonconference victory this month. Notre Dame will get chances at home against UCLA (Dec. 14) and in Indianapolis against Indiana (Dec. 21) for a brand-name triumph outside the ACC.

Maryland: The evidence continues to build that the Terps are an elite defensive team. Three days after holding Marquette star Markus Howard to just six points, Maryland smothered the Fighting Irish, limiting them to 29.0 percent from the floor.

Maryland, which rose to No. 3 in this week’s poll after winning the Orlando Invitational, did nothing to dent its lofty ranking in the first of two games this week.

Notre Dame: The Fighting Irish begin a three-game homestand Saturday, facing Boston College in their first ACC game in more than a month.

Maryland: The Terps open conference play on Saturday at home against Illinois, the first of two league games in a span of four days.