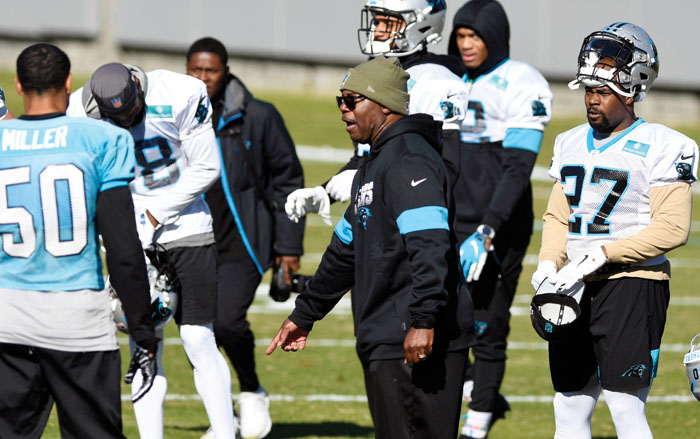 CHARLOTTE (AP) — Panthers owner David Tepper has hinted that Carolina’s next head coach will be someone with an offensive background.

“In the modern NFL, I think there is a preference for offensive coordinators (and) I think there are reasons for that,” Tepper said late Tuesday. “That does not mean that if you find somebody fantastic on the defensive side, I won’t consider it. If he has old-school discipline and modern and innovative processes.”

Rivera said Wednesday that he doesn’t believe his coaching career is over.

In his final news conference at Bank of America Stadium Rivera said he will take the next four weeks off but is eager to coach again next season.

“I do believe I will get another opportunity, and I will coach again,” Rivera said.

The 57-year-old Rivera opened his news conference by adamantly defending his accomplishments in his nine seasons in Carolina. He took over a 2-14 team, won three straight NFC South titles and led the Panthers to the Super Bowl.

He leaves with a 73-61-1 record, more wins than any Panthers coach

“That’s why you’re having more people go that way,” said Tepper, who bought the Panthers in 2018 and did not hire Rivera, who was already in place. “I think you have a lot of people on that side accepting the more modern processes.”

Tepper has spoken repeatedly about his distaste for the “long-term mediocrity” that has plagued the organization.

Rivera said he believes the team’s struggles the past two seasons are directly tied to quarterback Cam Newton’s injuries. Newton struggled through shoulder problems in the second half of last season and played only two games this season because of a foot issue which may require surgery.

“The biggest thing that contributed to our long-term mediocrity the last two seasons is that we didn’t have our quarterback situation settled,” Rivera said. “…. Our problems didn’t start until when? Until our quarterback got hurt.”

Rivera said he was surprised Tepper fired him with four games left in the season.

Tepper said he’ll form an in-house committee to lead the coaching search, which will commence immediately.

It does not appear he’s in the market for a college head coach, talking about how difficult the transition to the NFL level can be. He also said he wants a coach who will try new things, but if they don’t work is willing to acknowledge the mistake and fix the problem.

“You want to be successful? I don’t care what you do, admit when you do things wrong,” Tepper said. “Fix what you do and keep doing the things you do right. It’s not that hard. What’s hard is for people to admit that they’ve made a mistake.”

For now, Perry Fewell will serve as Carolina’s interim coach.

Fewell, who grew up about 15 minutes from the Panthers stadium in Cramerton, North Carolina, interviewed for the Panthers head coaching job in 2011, but it was given to Rivera instead. Looking back, Fewell said he wasn’t ready to be a head coach at the time, even though he had served as the Buffalo Bills interim head coach in 2009.

Fewell said he’s excited to make the most of this opportunity and talked about what Rivera had done off the field.

Some players were caught off guard by Rivera’s firing and there was a somber mood looming over the Carolina locker room. There wasn’t any loud music playing, but there was an outpouring of emotion and support for Rivera.

“This is about as bad a day as I have been a part of,” tight end Greg Olsen said.

Rivera said his biggest regret is not winning a Super Bowl, although the Panthers came close. They finished the 2015 season with a 17-2 record, losing 24-10 to the Denver Broncos in Super Bowl 50.

Now, he said, it’s time for another coaching challenge.

“I’m going to be honest with you,” Rivera said, “I’m kind of excited.”

PANTHERS’ QB NEWTON TO HAVE SURGERY ON FOOT NEXT WEEK

Newton suffered a Lisfranc injury in the preseason and started two games in the regular season before being placed on injured reserve.

Fewell said he had no other details about the procedure or how long it will take for Newton to recover.

Carolina must make a decision on Newton’s future after the season. Newton will cost $21.2 million under the salary cap next season, but the team can save $19 million by trading or releasing him.

Owner David Tepper says the team will wait to see how Newton recovers before making any decisions about his future.

Fewell also said Kyle Allen will continue to start Sunday when the Panthers visit the Falcons. Atlanta beat Carolina 29-3 last month and Allen threw four interceptions and was sacked five times. Allen is 5-5 this season as the team’s starter and his backup is third-round draft pick Will Grier.