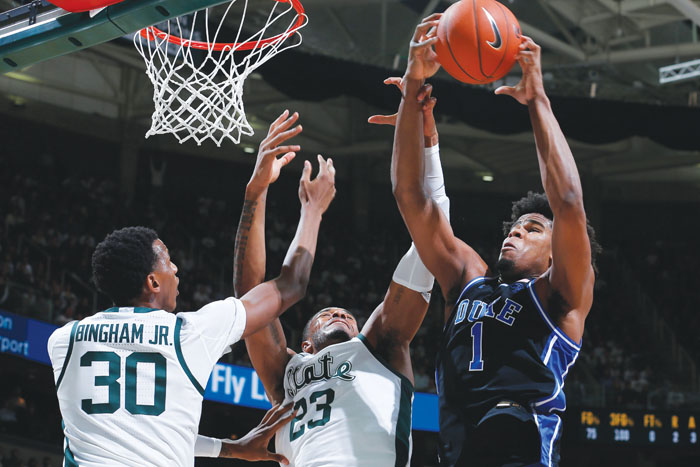 By LARRY LAGE AP Sports Writer
EAST LANSING, Mich. (AP) — Vernon Carey Jr. had 26 points, 11 rebounds and three blocks to help No. 10 Duke dominate No. 11 Michigan State in an 87-75 victory Tuesday night.
The Blue Devils (8-1) looked like one of the top teams in the country and not a rebuilding one a week after losing at home to Stephen F. Austin.
Duke guard Tre Jones scored 20 points, matched a career high with 12 assists and made three steals as part of a defensive effort that forced 14 turnovers.
The Spartans (5-3) went into the game “a little fragile,” according to coach Tom Izzo, and they looked out of sync and overmatched.
Duke went on an 8-1 run midway through the first half to build a double-digit cushion and led 45-29 at halftime.
Cassius Winston made a 3-pointer to pull the Spartans within eight early in the second half.
Carey answered the surge with a three-point play and a layup to restore a double-digit advantage the Blue Devils had no trouble maintaining.
Winston had 12 points on 4-of-14 shooting. Xavier Tillman, perhaps wearing No. 23 for the last time because Draymond Green’s jersey was retired by Michigan State at halftime, scored 20 points and Marcus Bingham added 13.
Matthew Hurt had 10 points for Duke, which got 11 from Joey Baker and 10 from fellow reserve Javin DeLaurier.
BIG PICTURE
Duke: Carey and Jones looked like the sort of stars the Blue Devils can build around to become one of the best teams in the country.
Michigan State: Izzo has a lot of work to do, trying to rally a team that has been reeling since Winston’s brother died last month.
POLL IMPLICATIONS
The Blue Devils will likely get a boost in next week’s poll, while the Spartans will continue to fall from their No. 1 ranking in the preseason.
UP NEXT
Duke: Plays at Virginia Tech on Friday night.
Michigan State: Hosts Rutgers on Sunday night.
___
More AP college basketball: https://apnews.com/Collegebasketball and https://twitter.com/AP_Top25