Mount Ulla now has a sign for all times 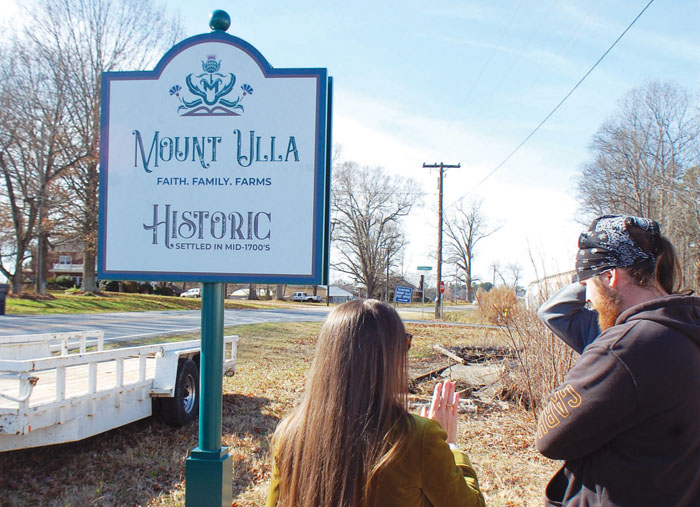 One of the main forces behind the new Mount Ulla sign's design and installation, Natalie Wilson talks with Cody Morris and Dakota Diaz-Trent, who erected the sign Tuesday as workers for Media Resources of Charlotte. Mark Wineka/Salisbury Post

MOUNT ULLA — Natalie Wilson made no attempts to hide her excitement Tuesday.

“Today is the most exciting day in the world,” she said, standing along N.C. 801 where she beheld the installation of a beautifully designed, all-aluminum sign for her cherished community — Mount Ulla.

With her were James and Marian Rollans, charter members of the Mount Ulla Historic Preservation Society, along with Mount Ulla Postmistress Jennifer McDaniel, who walked across the railroad tracks during her lunch break.

James Rollans told the sign installers  — Cody Morris and Dakota Diaz-Trent with Media Resources of Charlotte — that, “Y’all will grow up some day, move to Mount Ulla and say, ‘I put that sign up.'”

Rollans said it took three years and several different design ideas and sign companies before it all came together and led to Tuesday’s big day, accomplished with little fanfare.

“I think I’ve already got 10 pictures,” Marian Rollans said. “We have been through I don’t know how many designs, and Natalie said, ‘We’re going with this. The key was turning it over to her and Gerry.”

Wilson and Gerry Smith, who both live in greater Mount Ulla, took control of the sign project in August 2018 after two years of its having gone nowhere.

“Gerry and I were on the same page and in awe of the beauty and history of Mount Ulla,” Wilson said, “so it was easy to work right through with such love, respect and passion for our community.”

Looking at various town and community signs from across America, they did the research “to come up with the feel and look of our sign,” said Wilson, who also provided the symbolism in the sign, expressed through an emblem above the words “Mount Ulla.”

Wilson said the designer was Nazar Burega of Ternoil, Ukraine, a Russian-speaking Ukraine national by birth.

“I found him long before we worked on the sign,” Wilson said. “I was looking for a way to support Ukrainians at the time when Russia attacked Ukraine and annexed the Crimea. I worked with him several times before on other projects before placing trust in him for our community sign.”

The emblem’s composition reflects the historical and cultural heritage of the Mount Ulla community, which could be said to be Rowan County’s first settlement.

The letters “M” and “U’ make up a monogram in the center of the emblem. Thistle rises from the letter “M.”

Thistle is the national flower of Scotland and pays tribute, Wilson said, to the first settlers of the western North Carolina frontier in the mid-1700s who came from Pennsylvania.

These settlers were descendants of Scottish Presbyterians from Ulster, Northern Ireland.

Blue cornflowers flank the emblem on the left and right. Wilson said this is a nod to Lutherans from Germany who settled the frontier alongside the Presbyterians.

She said the three flowers taken collectively represent the community motto of “Faith. Family. Farms.” which also has a prominent place on the sign and was something Smith came up with.

An open book rests at the bottom of the emblem’s design. Wilson said it symbolizes the Bible and education.

“They were pioneers in founding primary schools, Davidson College and the nation’s first public university — the University of North Carolina at Chapel Hill.”

Over the years, Wilson said with a chuckle, she has become a self-proclaimed historian of Mount Ulla, devoting herself to learning as much as she can about this area of Rowan County.

“I realized I lived in a super-historic area,” said Wilson, who is the author of the Wikipedia entry for Mount Ulla and also writes a blog, the Mount Ulla Historian.

She has done extensive research on how Mount Ulla got its name — historians have never been sure — and she has her own theories, laid out in one of her extensive blog posts.

The sign stands in the heart of Mount Ulla, on the same side of the road where the old Sherrill feed mill once operated and across the tracks from the post office and fire station.

The sign’s spit of land is privately owned by Carlyle Sherrill and sits across from N.C. 801’s intersection with Centenary Road.

Smith and Wilson together chose the sign manufacturer, RP Signs of Charlotte, whose helpful representative was Christine Morgan.

“We selected the company because they are known for the quality of their signs,” Wilson said. “As a small community with limited resources, it was important for us to have a durable sign that can be refinished later as needed, rather than something that will deteriorate fast and will have to be completely replaced.”

As Wilson, the Rollanses and McDaniel all took in the sign Tuesday, it wasn’t long before McDaniel suggested that maybe the sign should be decorated for Christmas with wreaths and bows.

James Rollans immediately made her chairwoman for the decorating committee, which was newly appointed that second.