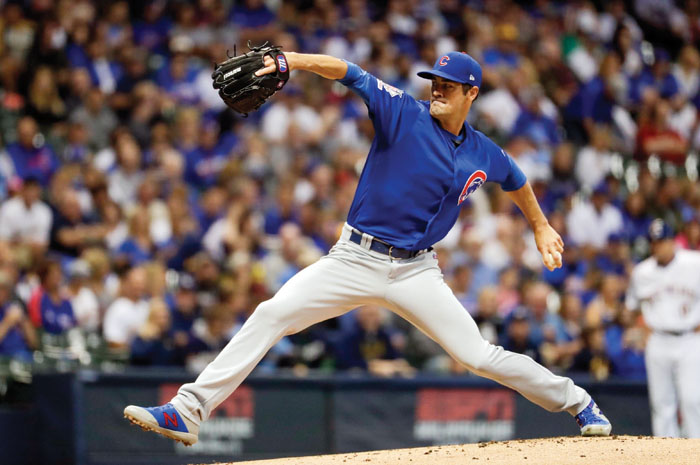 FILE - In this Sept. 6, 2019, file photo, Chicago Cubs starting pitcher Cole Hamels throws during the first inning of a baseball game against the Milwaukee Brewers, in Milwaukee. Left-hander Cole Hamels agreed to an $18 million, one-year contract with the Atlanta Braves, one of the more active teams of the offseason. (AP Photo/Morry Gash, File)

By CHARLES ODUM AP Sports Writer
ATLANTA (AP) — Alex Anthopoulos believes Cole Hamels can help the Atlanta Braves win big in next season— and help the team’s young starters have more success for years to come.
Hamels, who turns 36 this month. agreed Wednesday to an $18 million, one-year contract with the busy Braves, one of the more active teams this offseason.
Anthopoulos said young Braves starters Max Fried and Mike Soroka will benefit from Hamels’ 14 seasons in the majors.
“How you quantify that is hard, but I think there is real value,” Anthopoulos said. “We’re signing Cole first and foremost because we think he’s going to help us win a lot of games … and hopefully get to the World Series. No doubt in my mind … I think Max Fried will get better just be seeing him and being around him. I think Soroka will get better.”
The Braves have won two straight NL East division titles but failed to win a playoff series.
Hamels said the Braves “were one of six teams I was really following and really rooting for” in free agency. He said Anthopoulos, the Braves general manager, was the first to initiate serious discussions.
“I reward the first team that actually does what they say they’re doing,” Hamels said, adding when a financial agreement was reached “boom, we were there and it was going to happen.”
Hamels said he is impressed by the Braves’ young talent.
“I’ve always been following them in hopes of maybe having an opportunity to pitch with some of those guys,” he said. “… I think what I can provide might be beneficial.”
Anthopoulos said he had interest in Hamels before the 2018 season, when the pitcher signed with the Cubs, and again last year, before Chicago exercised a team option.
Anthopoulos moved quickly this offseason after first addressing two other needs in free agency.
Atlanta gave left-handed reliever Will Smith, a possible closer, a $40 million, three-year contract and added catcher Travis d’Arnaud for a $16 million, two-year deal.
Atlanta also has re-signed four players: outfielder Nick Markakis, catcher Tyler Flowers and relievers Darren O’Day and Chris Martin.
Anthopoulos said he needed to be active because the Braves had a large number of expiring contracts.
“It hasn’t been by design,” Anthopoulos said. “We had a lot of free agents … so we had a lot of work to do.”
Anthopoulos said he’s still looking for help at third base after Josh Donaldson became a free agent. He didn’t rule out the possibility of adding another starting pitcher.
Hamels replaces Julio Teheran, who became a free agent after his $12 million team option was declined.
Hamels joins Soroka (22), Fried (25) and Mike Foltynewicz (28) in the projected rotation. Anthopoulos said left-hander Sean Newcomb, who spent most of the 2019 season in the bullpen, will be given a chance to win a starting job.
Among other contenders for the final spot in the rotation will be Kyle Wright, Bryse Wilson and Ian Anderson, one of the team’s top prospects. The one-year deal with Hamels leaves room for Anderson to move into the rotation in 2021, if not before.
Hamels was 7-7 with a 3.81 ERA in 27 starts last season. has 163 wins and a 3.42 ERA in 14 seasons. He began his career with Philadelphia, where he was a three-time All-Star in 10 seasons.
He finished fifth in the NL Cy Young Award voting for the Phillies in 2011, when he was 14-9 with a 2.79 ERA. He was 17-6 with a 3.05 ERA in 2012.
___
More AP MLB: https://apnews.com/MLB and https://twitter.com/AP_Sports