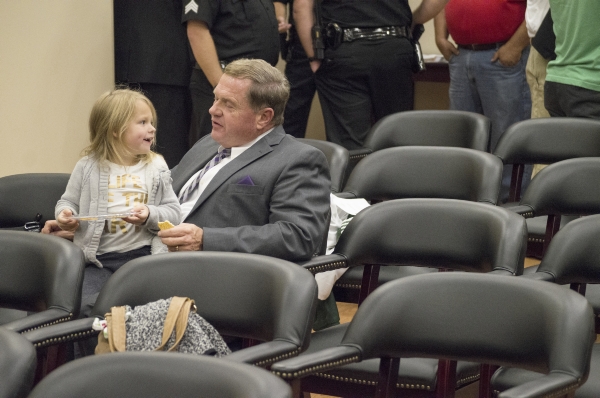 CHINA GROVE – Energetic, goal-driven and approachable are just three words Don Bringle used to describe himself now that he’s back on the China Grove Town Council.

“After the election, I was contacted by several councilmen asking if I had an interest in filling Seaford’s position, and I told them I was honored that they would consider me and that, if it was a unanimous vote, I would take that on,” Bringle said.

The vote was indeed unanimous.

Bringle, who was previously mayor for 12 years and served two terms on Town Council, said that he plans to simply focus on helping the town grow.

“I don’t have any specific project goals, seeing that it’s too early in the game,” he said. “I want to be supportive of the board and their actions moving forward. I am open-minded and am willing to listen to any new ideas from the board and members of the community.”

Originally from Spencer, Bringle moved to China Grove in 1975 to work in the textile industry after graduating from N.C. State University. And he’s lived in the community for 40 years.

“I know where we’re at, where we’re going to facilitate the needs of this growth coming toward us,” he said. “I’ve served on several different boards over the years.”

A graduate of North Rowan High School, Bringle worked in the textile industry for 27 years before accepting a job as director of facilities, parks and recreation with Rowan County — a role he’s worked in for 10 years. Bringle said that in his work with Parks and Recreation, he enjoys being able to “provide recreation for the citizens of the county.”

Bringle said he uses the word energetic to describe himself because he is often “excited about getting things done.”

“If there is something in front of us, let’s obtain what the objectives are. I am not a behind-the-scenes person; I like to be in front,” Bringle said. “And I like to make sure that we’re task-driven and completing what our goals are and the functions of the town.”

Bringle described himself as approachable and always available.

“If someone has a concern, they can come to me and talk to me. I will listen to their idea,” he said. “We may not agree, but we can agree to disagree. I have an open-door policy.”

Asked about his decision not to seek re-election in 2015, leading to Withers’ election, Bringle said, “It was time for me to step down and someone new to step up.”

Bringle also spoke about his runs for Town Council dating back to 1985.

“I ran hoping to get involved in local government at that time and hoped to make a difference in the community,” he said.

Bringle said his mother-in-law, the late Jamima DeMarcus, who served as a Rowan County commissioner and China Grove Town Council member, encouraged him to look into running for office.

While he hasn’t been in elected office since 2015, Bringle said he has remained involved in the community through his work with the China Grove Civitan Club, working at his local church and being a grandfather to “two amazing grandchildren.”

Bringle said he is fully supportive of Seaford as mayor and is “open to his ideas of leadership” and the ideas of his fellow council members.

“I just consider this an honor and privilege by being asked to serve a two-year term,” he said.