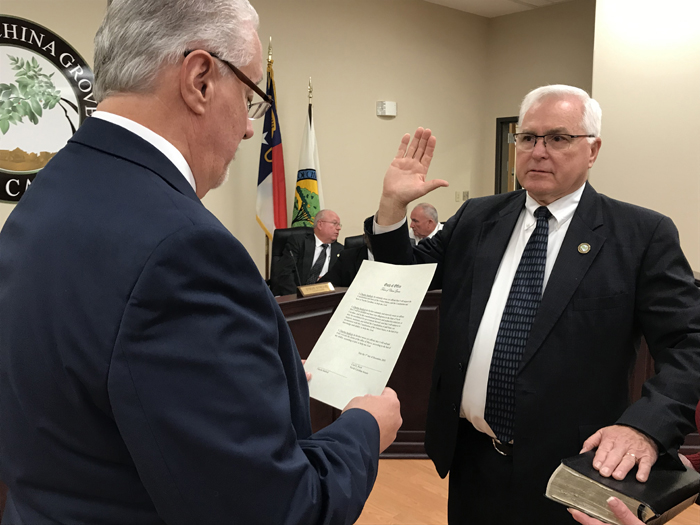 Charles Seaford is sworn in as mayor of the town of China Grove by state Sen. Carl Ford at Tuesday's Town Council Meeting. Terrence Jefferies/Salisbury Post

He was sworn in by state Sen. Carl Ford, R-33. Seaford previously served two and a half terms, or 10 years, as a councilman.

Seaford has said his plans for office include continuing efforts to market the town of China Grove, keeping taxes low, paving roads and focusing on industrial growth.

Now being retired, Seaford said he has time to focus on the job and aims to maintain China Grove’s “small-town atmosphere” and continue traditional events such as Christmas in the Grove and Farmers Day.

Withers on Tuesday reflected on his time as mayor.

“These are my last words as city mayor,” he said. “These last four years have been the toughest of my adult life.”

He also highlighted his various accomplishments while serving as mayor, including starting the Mayor’s Youth Council.

“I challenge this board to keep this good work of keeping our board clean,” Withers said.

He gave special recognition to his father, Roger Withers, for his work in the China Grove community.

• The board approved and swore in former Mayor Don Bringle to fill Seaford’s remaining term as councilman. Bringle will serve for two years. Bringle was mayor for 12 years and served two terms on the town council.

• Rodney Phillips and Steve Stroud, who were unopposed in November, were also sworn in as councilmen, with their terms ending December 2023.

• The board made 2020 appointments to the Transportation Advisory Committee and the Technical Coordinating Committee of the Cabarrus-Rowan Urban Area Metropolitan Planning Organization.

• The board reminded the community of Christmas in the Grove, which will be held along Main Street and Swink Street on from 5 to 9 p.m. Dec. 14 and the town Christmas tree lighting at 7 p.m. Saturday in Hanna Park on Main Street.