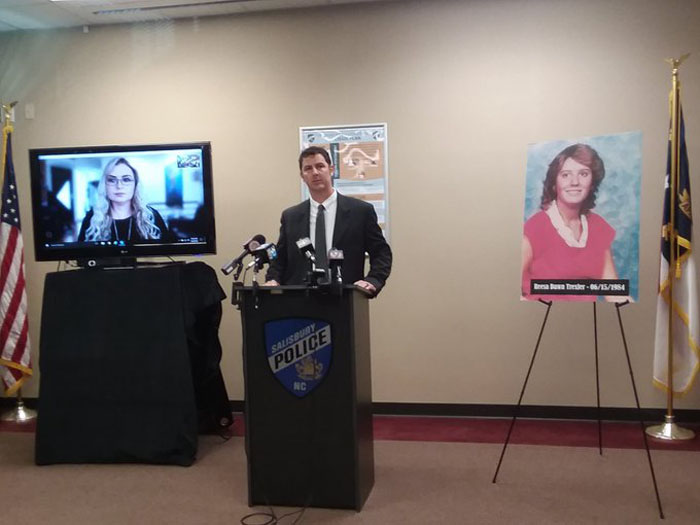 SALISBURY — Salisbury Police detectives say they have solved the 35-year-old murder of Reesa Dawn Trexler, a local teen who was found stabbed to death at her grandfather’s North Shaver Street home, according to details revealed during a morning press conference.

Officials would only say that the suspect was a black male and that the case has been cleared. However, the Post obtained a petition for the exhumation of Curtis Edward Blair, whose body, court records show, was exhumed to conduct a forensic evaluation.

The petition indicates witnesses saw a black male running in the area of the crime scene at the time of the homicide. Investigators received information that Blair was employed by Frito-Lay in Salisbury, two blocks from the crime scene.

According to the court documents, a case summary says investigators seized a knife belonging to C. Blair, which was submitted to the state crime lab for analysis, but no blood was detected.

Salisbury Police submitted a DNA swab from a sexual assault kit and the lab was able to extract DNA and developed a male DNA profile. Police consulted with Parabon NanoLabs and submitted the profile for a genetic genealogy report. Based on genetic, genealogical and circumstantial evidence, Blair was a “very strong candidate to be the subject of the unidentified male extracted DNA profile,” court documents said.

Blair died Aug. 6, 2004, court records show, and at the time of his death, he lived in San Diego County, California. His remains were interred at Memorial Park Cemetery in Salisbury a few weeks later.

Trexler, 15, was found June 15, 1984, nude on the floor in a bedroom of the home. She had been stabbed several times in the upper chest and neck. An autopsy would later reveal the blade of a knife had broken off and was found in her right shoulder.

Trexler’s sister, Jodie Trexler Laird, appeared on “The Dr. Phil Show” in 2018 and passed a polygraph test, which renewed interest in the case. She has been exonerated by the new evidence, as well. Police say she was instrumental in closing the case.

In 2018, Detective Travis Shulenberger told the Post that some evidence was never tested because of limited technology in 1984. That evidence was retested with the help of the N.C. State Crime Lab and Parabon NanoLabs Inc., a private lab based in Virginia.