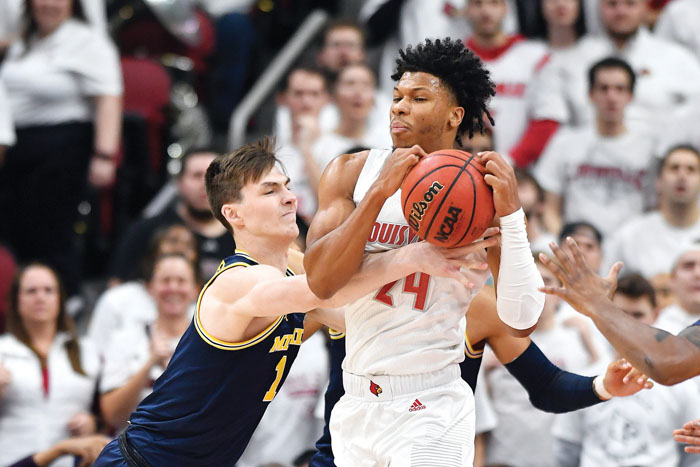 LOUISVILLE, Ky. (AP) — Jordan Nwora had 22 points and 12 rebounds, and top-ranked Louisville held No. 4 Michigan to a season-low 26% shooting mark for a 58-43 victory Tuesday night in the Big Ten/ACC Challenge in its first game since returning to No. 1.

The Cardinals (8-0) shot just 37% but their defense stifled Michigan (7-1) much of the night as they earned a signature victory one day after claiming the top spot in the AP Top 25 for the first time in six years. Though second-year coach Chris Mack has downplayed rankings, the win was significant for a program he has guided back into the national championship discussion following a sex scandal and the school’s involvement in a federal corruption investigation of college basketball.

The Cardinals also kept the Wolverines and first-year coach Juwan Howard from adding another top-10 upset to the ones that helped them enter the Top 25 and match Kansas (1989) for the biggest jump from being unranked in the 70-year history of the poll.

Steven Enoch had 10 points and 10 rebounds, and Dwayne Sutton had 11 boards as Louisville topped Michigan 48-41 in that category.

Louisville backed up its high ranking with the signature win it sought. Michigan could fall a few spots but can stay in the Top 10 by beating Iowa this week.

Michigan: After a strong shooting stretch that keyed wins over No. 6 North Carolina and No. 8 Gonzaga, the Wolverines fell back to Earth. They began 2 of 13 from the field and never really recovered.

Louisville: The Cardinals weren’t sharp by any means but passed their first big test against high-profile competition. Their defense limited chances inside and forced Michigan into perimeter shots that often missed.

They passed the first test easily.

Ryan Young added 12 points and Pete Nance had a pair of 3-pointers during a key 16-0 first half run for the Wildcats (4-3). Nance finished with eight points.

The Wildcats’ run over a 5:36 stretch turned a one-point deficit into a 35-20 edge. Nance started it with a 3 and Kopp added a trey in his five points.

BC was outscored 23-2 at the start of the second half in its last game, a 20-point loss at Richmond.

During the spree, the Wildcats switched to zone and didn’t come out of it from midway in the first half until after the midpoint of the second.

Jairus Hamilton led BC (4-5) with 12 points, Derryck Thornton had 11 and Jay Heath 10. The Eagles lost their fourth straight game.

BOONE (AP) — Adrian Delph had 19 points off the bench, hitting five 3-pointers, to carry Appalachian State to a 90-58 win over NAIA-member St. Andrews on Tuesday night.

Reserve Justin Forrest totaled 14 points and six assists for the Mountaineers (5-4). Kendall Lewis pitched in with 12 points, five rebounds and four steals. O’Showen Williams had 11 points and four assists, while sophomore James Lewis Jr. came off the bench to score 10 with 10 rebounds for his second-career double-double.

Isaac Clay had 15 points for the Knights.

St. Andrews shot 48% from the floor but took 27 fewer shots than Appalachian State. The Knights sank 10 of 20 from distance but were outrebounded 41-24.

Joke as playing captain turns into reality for Tiger