Joke as playing captain turns into reality for Tiger 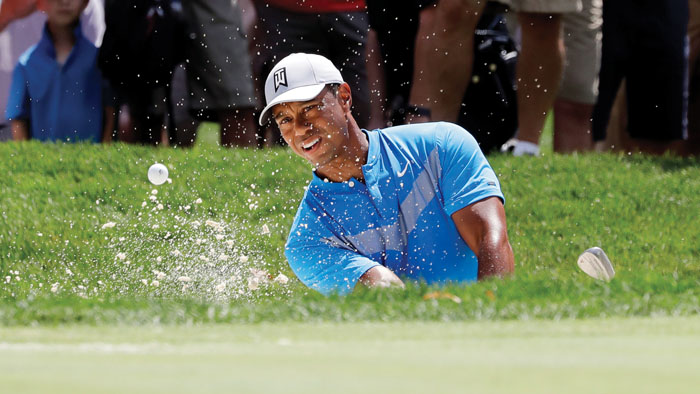 FILE - In this Thursday, Aug. 15, 2019 file photo, Tiger Woods hits from a sand trap on the fourth hole during the first round of the BMW Championship golf tournament at Medinah Country Club in Medinah, Ill. Woods is in the Bahamas this week as a player and a host, and in Australia next week as a player and Presidents Cup captain. (AP Photo/Nam Y. Huh, File)

NASSAU, Bahamas (AP) — Tiger Woods meant it as a joke.

And it was accompanied by laughter.

Woods was introduced as U.S. captain for the Presidents Cup in Australia on March 13, 2018, and the first question was whether he considered being a playing captain.

The laughter that followed that day at Bay Hill could have been interpreted two ways.

His answer was quick and short, no elaboration necessary, because a guy who dominated golf like no one else had never considered himself anything but a player.

Or maybe it was simply laughable to think of Woods playing in team matches again.

At the time, it had been four years and five months since he played on his last team, the 2013 Presidents Cup at Muirfield Village. He had gone through four back surgeries since then, limiting him to only six tournaments in the previous two years. And only five months earlier, when he was a vice captain at the Presidents Cup, he said he could envision a scenario where he never competed again.

“It was a joke,” Woods said Tuesday at the Hero World Challenge, smiling at the memory. “But it turned into reality. Here we are.”

That now seems so long ago.

The notion that he would be at Royal Melbourne without his clubs is absurd.

Starting with the Tour Championship last year, when Woods had gone five years without winning, he won at East Lake to complete one phase of his comeback. Then, he won the Masters in April, the missing piece, because he had gone 11 years since his last major and 14 years since his last green jacket.

And then he had another surgery on his left knee — his fifth, making the knee 1 up over the lower back — and returned two months later by winning the Zozo Championship in Japan for his 82nd victory on the PGA Tour, tying Sam Snead for the career record.

He is not entirely back to normal because Woods turns 44 at the end of the month, and his body — no matter how often it’s been repaired — doesn’t respond the way it did when he was in his early 30s. What doesn’t get enough attention was the knee surgery the week of the Tour Championship to clean up minor cartilage damage.

The surgery was supposed to be after his Hero World Challenge last year, but he wanted to start the season at Torrey Pines and surgery wouldn’t have allowed it. So he put it off, and then it caught up with him later in the year when he couldn’t practice as much and rarely squatted down to read putts.

Was it worth it? Of course.

“I did get a Masters out of it,” Woods said.

The surgery ultimately gave him a busier schedule than he would have imagined, and it gave golf a boost at a time of the year that it’s easily forgotten.

What follows is two weeks of Tiger in dual roles.

He is the tournament host of the Hero World Challenge that features 18 of the top 50 players in the world at Albany Golf Club. Woods has won his tournament five times, all of them at Sherwood Country Club in California when he was at full strength. He has never played well in the Bahamas, but he has never been at full strength.

Next week, he heads to Royal Melbourne as the captain of a team that has little to gain and much to lose. The Americans have not lost the Presidents Cup since 1998, such dominance that winning is a given. The last thing Woods wants is to be in charge of a team that allows the International team to end years of futility, particularly a team that has only two players who have won tournaments this year — Joaquin Niemann and C.T. Pan, both Presidents Cup newcomers.

He is the first playing captain since Hale Irwin in 1994 for the inaugural matches that really did feel like an exhibition.

“It’s a pretty neat responsibility,” Woods said. “And the role’s not easy. There’s a lot of moving parts, whether it’s talking to the guys, talking to my vice captains, organizing what we need to have done down there, not only to be ready but also, I need to keep sharp. I need to keep practicing. Because at minimum, I’ll be responsible for two points.”

Players are required to play at least once before Sunday singles.

“I’m host here and a player,” he said of the Bahamas. “And next week, I’m captain and a player. So it’s a lot of hats going on.”

But at least he’s playing.

That’s what he suggested the day he was appointed Presidents Cup captain, even if he says he meant it jokingly. Deep down, he probably didn’t.