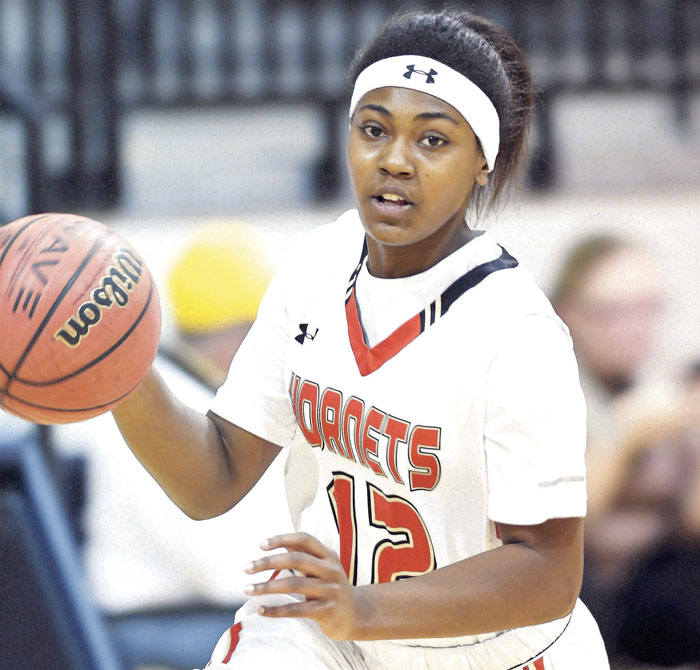 Playoffs: Lost 4th round to Forbush

Those seasons will be remembered as the Bryanna Troutman Era because in coach Lakai Brice’s two pre-Troutman seasons the Hornets were 12-36.

Troutman, a stat-sheet stuffer who is now a starter for Wingate as a freshman, turned around the program. The challenge for Brice now is to sustain that success without her.

“Bry was a great player for four years,” Brice said. “We’ll be a much different team without her, but we can still be a very good team.”

Salisbury may also miss the quickness of Jinika Glenn and Chantal Robinson and the toughness of Tacorra Robinson, but Brice believes this will be a better-shooting team and a better ball-handling team that makes fewer turnovers. Salisbury beat a lot of CCC teams by out-scrapping and out-muscling them. This year, they might out-finesse them.

“Our top eight or nine are going to have a lot of basketball skills,” Brice said.

It will start with senior Anayia Fulson, who averaged 11.6 points per game in 2018-19 and topped 1,000 career points early this season. Fulson, a four-year starter, is an interesting player. She’s got ball-handling and passing ability and can score in bunches when she’s on. She might go 0-fer on 3-pointers some nights, but there’s also a chance she’ll make three in a row.

“She’ll be the field general this year, our leader,” Brice said. “She’s pass-first, mostly a penetrator and facilitator, but we’ll also need her to score more without Bry. We should be able to help her out more as far as handling the ball.”

Sophomore Rachel McCullough is a tremendous shooter, especially out of the corners. Most teams feel like they have to play zone against Salisbury, but she’s a zone-buster. She averaged 10.5 points as a freshman, including 24-point efforts against North Davidson and West Davidson. Brice is looking for McCullough to score more mid-range buckets and make more trips to the foul line this season. That’s the next step for her, to be able to pump fake and take the ball to the rim.

“Just an awesome shooter and she’s getting better putting it on the floor, rebounding and defending,” Brice said.

Sophomore Jaleiah Gibson played a lot last season and started some. She brings aggressiveness and physicality to the court and averaged 5.6 points and 4.8 rebounds. The Hornets will need her to get some of those tough rebounds that Troutman always got.

Seniors Jaliyah Oats, Jenesha Mashore and Jonnessha McEntyre and junior Ja’kiya Brown have been in the system for a while and will have roles to play.

Brice said Oats, who scored nine points in Salisbury’s opener this season is “smart and steady.” Mashore accepts the job of defensive stopper. Brown also is fast and active on defense. She played quite a few minutes last season and always provided an energy boost. McEntyre will be one of the team’s vocal leaders.

Jania Bolder, 5-foot-9, gives the Hornets more size and is a physical post player. She’s moving up from the jayvees.

Kyla Bryant, Coach Brice’s daughter, will make an impact right away. She already had an offer from UNC Wilmington before she played her first high school game and is rated among the top 25 players in the state in her class. She’s smart and skilled and will help the Hornets in every way.

Jamecia Huntley is a jaw-dropping athlete. She can really bounce off the floor and has good size at 5-foot-10.

“Hands down, she’ll be the best athlete I’ve coached here,” Brice said. “She’s hard-nosed and she’s active. She’ll get a lot of rebounds and stick-backs.”

Mary Morgan probably will do things more quietly than Bryant and Huntley, but she’ll be a glue player.

“She’s tough and took a charge in her first varsity game,” Brice said. “She’ll get hustle points because she works so hard. She reminds me a lot of a girl Salisbury had a few years ago — De’Rya Wylie. Mary is a sleeper, but she’s going to surprise people.”

That’s high praise for Morgan. Wylie was the ultimate, over-achieving Hornet. She always gave up inches inside, but usually came out on top.

Coming out on top is something the Hornets will do most of the time again this season.  With a special freshman class, this will be a matter of reloading, not rebuilding.

Salisbury is off to a 2-0 start, including a CCC win against Thomasville.