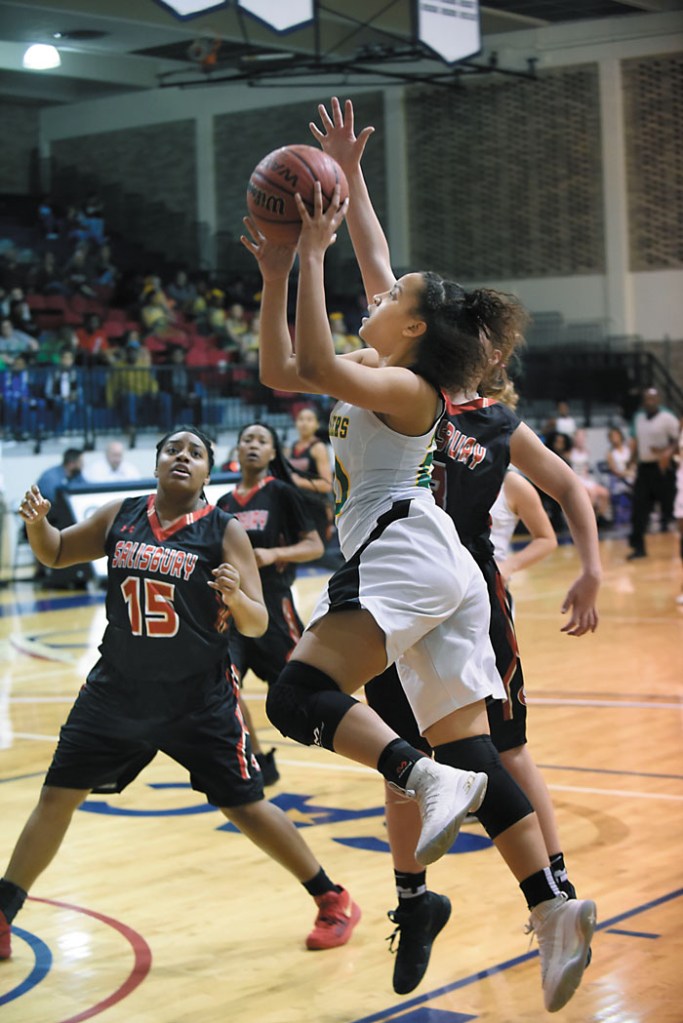 Playoffs: Lost 1st round to Community School of Davidson

SPENCER — North Rowan’s girls haven’t beaten any Rowan County program since a victory against Salisbury in the 2016 Central Carolina Conference Tournament when the Cavaliers were still 2A.

The Rowan girls programs look stout again this season, and North is still, by far, the county’s smallest school, but the Cavaliers may be ready to end that unfortunate streak.

North was still figuring things out early last season and stood 5-8 after being held under 30 points in early January losses to Salisbury and Gray Stone. By February, however, first-year head coach Lamar Wilkerson had things clicking. The Cavaliers won 11 of their last 15. They even won the Yadkin Valley Conference Tournament, beating Albemarle, which went 16-0 in the YVC regular season, in a thrilling championship game.

“We exceeded expectations,” Wilkerson said. “Last year, the plan was to lay a foundation for the future, but the girls bought in, and they started applying the things they were learning in practice on the court. We won more and won more quickly than anyone anticipated. Now we’re excited about a new season. We’re getting closer to getting North girls basketball back to where we all want it to be.”

The most critical loss from last season’s team was Jamiya Daniels, who made a major impact with her stick-backs and extreme athleticism during North’s stretch run.

But North has six returners, including Natavia Taborn and Hannah Wilkerson, the coach’s daughter. They’re young, but Taborn, now a junior, and Wilkerson, now a sophomore, were second team all-county last season.

Taborn scored 25 in hard-fought wins against South Stanly and North Moore and poured in a career-best 27 in the YVC tourney triumph against Albemarle.

Taborn is small, but she can push the ball and pass it and is an excellent transition scorer. She averaged 11.6 points per game.

“She can create a lot of things for us, but her biggest role this year is going to be leader and teacher,” Coach Wilkerson said. “She’ll play more off the ball because we’ve got a good freshman point guard (Kamora Cannie). One of Natavia’s jobs is going to be tutoring her.”

Hannah Wilkerson (5-foot-8) had a phenomenal freshman season, averaging 16.2 points per game. She’s not flashy, but she’s mature, smooth and consistent and scored in double figures 25 times. She topped 20 points eight times. She piled up 453 points, a tremendous total for a freshman.

“Hannah will play some on the wing, but you’ll also see her down in the post,” Coach Wilkerson said. “She’s got a mid-range game and a post-up game. Hopefully, she’ll create matchup problems.”

Junior Makiya McDaniel, gives the Cavaliers some size and rebounding at 5-foot-10 and has quietly contributed 269 points in her career. She’s added strength and Coach Wilkerson expects her to be more physical this season.

Sophomore guard Kimya Lynch returns as a fine complementary player. She’s not going to score a lot, but her defense, quickness and energy are important. When North goes to a box-and-one defense to slow down a big scorer, Lynch will be the key defender.

Sophomore guard Alaysia King contributed valuable minutes as a varsity freshman and could have a bigger role this time.

Junior forward Darlissa Robbins, a very good rebounder for someone who is 5-4, will be in the mix at some point during the season. She’s recovering from an ACL injury she suffered in AAU ball last April.

The rest of the players the Cavs are counting on are freshmen — Cannie, Azeria Elder, Chloee Stoner and  Samayah Perry.

Cannie should be a big factor right away. She’s new to the area, but is rated as one of the top 50 players in the Class of 2023.

Elder is a 5-8 forward with some length. Stoner gives North another ball-handler. The 5-11 Perry will be someone to watch for the future.

Put it all together and North will have a lot more ball-handling this season, as well as more scorers. There are going to be more lineup options, as the Cavaliers can play really small and quick with three guards and Wilkerson as the power forward or reasonably tall with Wilkerson out on the wing.

“We’ve got a lot of girls who have made a strong commitment to getting better,” Coach Wilkerson said. “We’ve got a chance to grow some more.”

North Rowan’s girls are scheduled to open at home on Tuesday against Cabarrus Charter Academy.