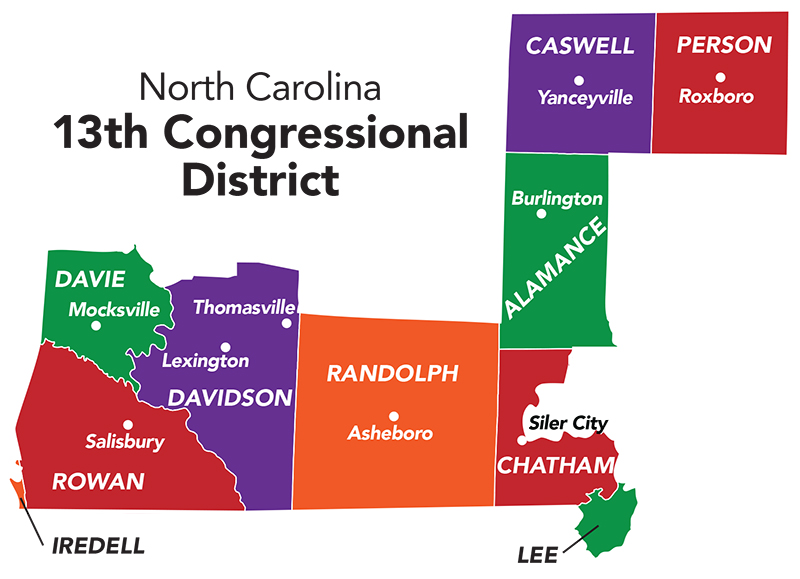 Now, they’ll go from two congressmen to one.

Judges on Monday gave a chilly endorsement of a congressional map passed earlier this year as a result of a state court’s ruling saying a previous map was a partisan gerrymander.

It’s time for citizens to vote, he said.

With North Carolina’s congressional district maps changing so frequently, it’s hard for voters to know who represents them. So, here’s the most essential items voters should know:

• Rowan County will be entirely contained within the 13th Congressional District, currently represented by Davie County Republican Ted Budd. Budd, a gun shop owner and political neophyte who  was antiquated with powerful Republicans in N.C., emerged from a massive field of Republican candidates during a special election in 2016. He lives in the Davie County community of Advance.

• Rep. Richard Hudson’s 8th Congressional District will stop at the Stanly and Cabarrus lines. The 8th District has included parts of Rowan County since Hudson was elected in 2012, and it’s been a strong base of support for him during election time. His district will now stretch over to Fayetteville and Sanford and include all of Cumberland County — a move that’s likely to make contests closer for Democrats.

• The 13th District, in addition to covering Rowan County will include all of Davie, Davidson, Randolph and Alamance as well as Caswell and Person counties near the North Carolina-Virginia border. It will include parts of Chatham and Lee counties, located southeast of Raleigh. Because of its borders the 13th District looks to be a safe Republican district, with President Donald Trump winning precincts within its borders with 67% of the vote in 2016.

• Should a Democrat challenge Budd in 2020, he or she will face a much tougher road to victory than Democrat Kathy Manning in 2018.

If there’s a positive to judges choosing to keep the legislature-approved map, it’s that Rowan will have a single congressman with which many voters will be familiar.

Still, the map likely will give Republicans an advantage that does not match the partisan breakdown of the electorate in the state, which is closer to 50-50 than what could be eight Republican seats and five Democratic ones. An independent commission — something Republicans and Democrats in North Carolina support — could fix that.