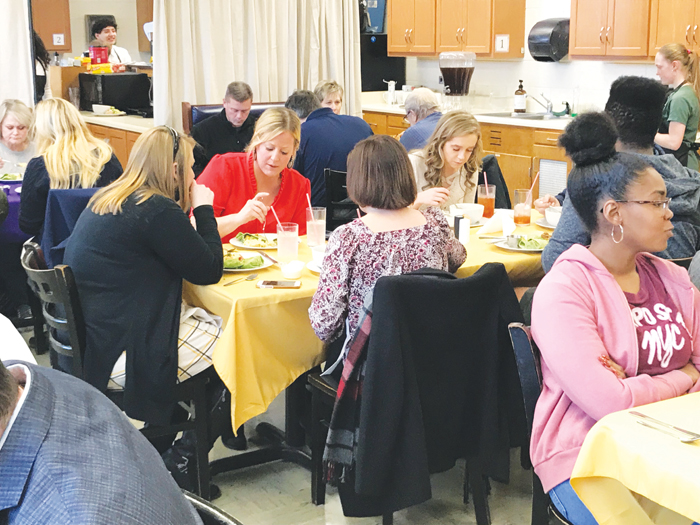 Misenheimer’s students saw their restaurant come to life through applying for “jobs” to work behind the scenes preparing meals and also to interact with their guests.

Students got involved through positions that included manager, server, cook and dishwasher.

Guests at Tuesday’s lunch were given the choice of a grilled chicken wrap and baked macaroni and cheese or broccoli and cheddar soup with a salad.

Benton said she thought it was “well organized.”

“It was like a real restaurant in a way, and the food was really good,” she said.

Misenheimer said that, as a career and technical education teacher, she is always looking for ways to make her lessons connect with students and to teach them skills they will use long after they leave her classroom.

Misenheimer said she began a GoFundMe page at the beginning of the fall semester to purchase used restaurant equipment and supplies for her classroom.

“Through generous donations, I was able to transform my classroom and open the possibility of having a pop-up restaurant in my actual room here at school,” she said. “Actually seeing the refurbished tables, booths and restaurant chairs in our classroom, the students couldn’t help but get excited about the possibilities this would open up.”

Misenheimer teaches students how to work as a team, helps them identify the correct equipment and utensils to use while cooking, and teaches them “basic kitchen skills.”

“We’ve been learning about things such as measuring liquids, solids, that kind of stuff, weighing stuff, how long you should cook something and what temperature it needs to be in order to be served,” ninth-grader Will Williams said. “We started preparing the chicken yesterday. We had to get 4-gallon baggies, had to cut up the chicken breast, place them in the baggies, and we then had to fill up the baggies with Italian dressing and let them marinate. Today we put them on the griddle.”

“After mastering these skills, the students used their knowledge to start creating menus based on different seating times during the day,” she said.

Tenth-grader Mackenzie Sikes said she loves that she and her classmates had the opportunity to “work together as a team.”

Misenheimer attended a conference last summer that “planted a lot of seeds to be more purposeful” not only in her planning but to allow students to see how her class could relate to their everyday lives.

Misenheimer said she aims for her students to walk away from the experience with “lots of new skills” that they can use at home and for prospective careers.

Guests were provided a choice of a fruit tart or a brownie with milk or hot chocolate for dessert by her fourth-block class Tuesday afternoon.

Representatives of the Rowan-Salisbury Schools administration and parents and guardians of Foods I students in Misenheimer’s class were among those in attendance Tuesday.