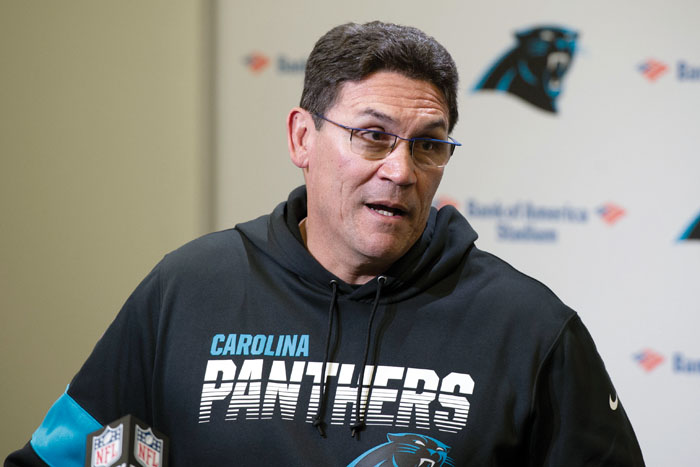 By STEVE REED AP Sports Writer
CHARLOTTE (AP) — Panthers owner David Tepper said he would have preferred to wait until after the season to make a coaching change.
Tepper ultimately decided he wanted to get a jumpstart on his search for a new coach, so he fired Ron Rivera, the franchise’s winningest coach, on Tuesday with the Panthers (5-7) all but out of playoff contention following a four-game skid.
“I was informed of other teams doing different types of searches out there and I’m not going to start a search and not tell Ron Rivera,” Tepper said Tuesday. “(He’s) too good of a man, and I have great respect for Ron. He’s a great human being and I’m not going to disrespect anybody like that, especially Ron Rivera.”
Tepper said by moving on from Rivera now he can begin a coaching search immediately so that it won’t put the team at a competitive disadvantage.
Secondary coach Perry Fewell was been named interim head coach. Offensive coordinator Norv Turner will transition to special assistant to the head coach, and quarterbacks coach Scott Turner will serve as offensive coordinator.
Rivera was hired in 2011 and was 76-63-1 in the regular season and 3-4 in the postseason. In nine seasons Rivera guided the team to a Super Bowl appearance, an NFC championship and three NFC South titles.
But the Panthers have fallen on hard times lately following injuries to quarterback Cam Newton the past two seasons.
The Panthers started this season 5-3 before dropping four straight games, including a 29-21 loss to the Redskins on Sunday. Last year, the team was 6-2 but lost seven straight games and finished 7-9.
Since losing to the Denver Broncos in Super Bowl 50 four seasons ago, the Panthers are 29-31 and have not won a playoff game.
Tepper appeared to be leaning toward hiring a coach with an offensive background, citing a recent NFL trend, although he wouldn’t completely rule out a defensive coach.
He said the priority is getting away from the “long-term mediocrity” that has plagued the franchise, and that could take time.
“Do you think I can promise to anyone that things can be great in one year?” Tepper said. “Do you believe in the Tooth Fairy? … If you think something great gets built in one second, then that’s wrong. You shouldn’t expect it, and fans shouldn’t expect. I’m not talking about one year. I’m talking about a standard that will be built and sustained — built and sustained. … There has to be a degree of patience to build sustained excellence.”
Rivera, 57, did not immediately return phone calls seeking comment from The Associated Press.
Rivera’s firing might not be the only change coming.
Tepper said he is going to take a “comprehensive and thorough review of our football operation” to make sure the team is structured for long-term sustained success.
“Our vision is to find the right mix of old-school discipline and toughness with modern and innovative processes,” Tepper said. “We will consider a wide range of football executives to complement our current football staff.”
General manager Marty Hurney’s job appears safe as Tepper praised his ability to scout college talent, but Tepper said the team will hire someone to be an assistant general manager/vice president of football operations.
Hurney will have a say in what person is hired, Tepper said.
“We all must recognize that this is the first step in a process, but we are committed to building and maintaining a championship culture for our team and our fans,” Tepper said.
Rivera was extremely well liked in the Panthers locker room, and he easily related to players having played nine seasons in the NFL for the Chicago Bears, winning a Super Bowl with Jim McMahon, Walter Payton and others in 1985.
He is a two-time NFL Coach of the Year and likely won’t have a problem landing a job next season.
As for what the move means for Newton remains to be seen, particularly given the fact that Tepper has shown he’s not afraid to make big changes.
The legacies of Rivera and Newton have always been intertwined as both came to the Panthers in 2011. Newton is coming off shoulder and foot injuries and the team could save $19 million under the salary cap if they release or trade him after the season.
Kyle Allen has filled in for Newton this season at quarterback and is 5-5 as a starter.
Newton said Tuesday on social media that “this one hurt deep.”
“Will be forever grateful because of the impact you had on my life,” Newton said of Rivera. “Thank you for giving me the opportunity. Thank you for believing in me. I can go on and on, but most importantly thank you for allowing me to be me.”
___
More AP NFL: https://apnews.com/NFL and https://twitter.com/AP_NFL