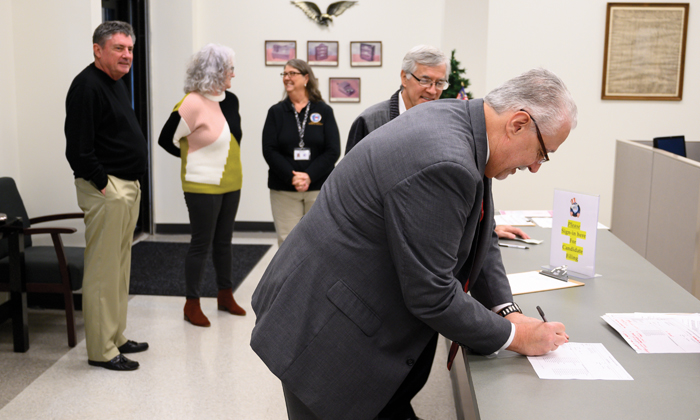 Candidate filing continues until noon Dec. 20 during the Board of Elections’ regular business hours.

Offices for which filing is open in Rowan County include:

• Two seats on the Rowan County Board of Commissioners, currently occupied by Mike Caskey and Pierce.

• One seat on the Kannapolis Board of Education, currently occupied by Adams.

• The District 33 seat in the N.C. Senate, currently occupied by Ford.

• The District 76, 77 and 67 seats in the N.C. House, currently occupied by Warren, Howard and Sasser, respectively.

Voters will also elect candidates to the Rowan-Salisbury Board of Education in 2020, but school board seats will be on the general election ballot. Filing will not start until after the primary.

Pierce, who said this year will be his last campaign for county commissioner, expects to see Republican competition for the board in 2020. Pierce said voters should choose him for another term because of work he’s accomplished to date.

“In the two terms that I’ve had, we’ve taken care of a lot of the school issues, lowered taxes, been able to bring a lot of industry, completed the Old Beatty Ford Road interchange,” Pierce said. “So, I think this is a pivotal time for the county to grow, and I think we need experienced people to handle that growth.”

Pierce clarified his “lowered taxes” comment by saying that the commissioners had decreased the tax rate after a revaluation this year. Anytime there’s a countywide re-examination of property values, some people will pay more in taxes, Pierce said.

“Instead of leaving the tax rate where it was, we saw an opportunity to lower that tax rate and give the citizens some relief on the tax increase that came from the revaluation,” Pierce said.

Warren said he will be able to serve Rowan County better as he rises in seniority in the House. But that doesn’t necessarily mean Warren hopes to step into a leadership position. He told the Post on Monday that senior members not in leadership positions can often get more done for their communities.

He used local projects in the state budget that passed both chambers and was vetoed by Gov. Roy Cooper as an example. In the budget were millions of dollars for renovations at the N.C. Transportation Museum, $300,000 for an evaluation of Rowan-Salisbury Schools’ renewal project, $50,000 for Bell Tower Green and money for a veterans memorial in China Grove as well as volunteer fire departments.

For his part, Ford says he’s running to “keep the good coming” and that he intends to listen to the opinions of his constituents regardless of their political beliefs.

He said Republicans in the legislature “have done what we said we were going to do.” That includes cutting taxes while the state’s tax revenue rises, Ford said. And he touted local items such as the widening of Interstate 85 and the completion of an interstate exit at Old Beatty Ford Road.

That the state is still operating on an old budget isn’t necessarily a negative, Ford said. Spending is lower and, Warren said, teachers will receive raises contained in the legislature-approved budget as well as back pay when the Senate overrides Coopers veto, which was already overridden in the House.

Candidate filing fees are $138.50 for Rowan County commissioner, $140 for state House and Senate, and $5 for Kannapolis Board of Education.