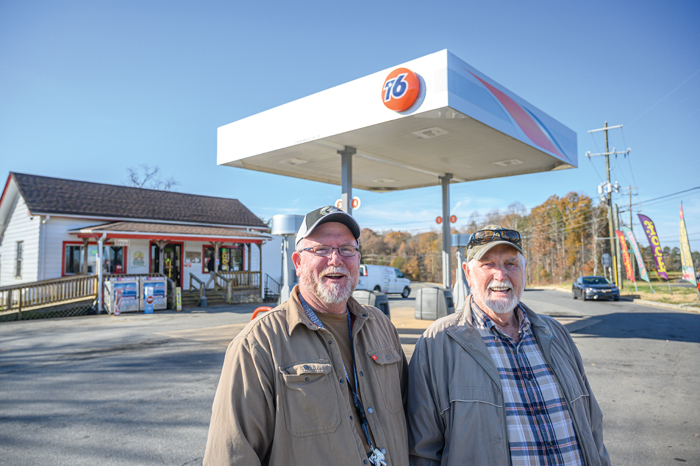 ROCKWELL — In southern Rowan County, all eyes are on growth.

A new interstate exit recently opened at a reconstructed Old Beatty Ford Road. A development there is expected to bring hundreds of millions of dollars in investment, 700,000 square feet of commercial space and hundreds of housing units. That the widening of Interstate 85 to four lanes in both directions has reached “substantial completion” is expected to bring growth from Charlotte, too.

But construction projects in the area have had a sharply different effect on one local business, leaving its owners hoping for brighter days.

At the intersection of Organ Church and Old Beatty Ford roads, Cheeseman’s General Store has seen a sharp decline in traffic to its store because of a 7.4-mile-long, road-improvement project. It starts at Lentz Road, in the Bostian Heights Area, and ends below Rockwell at Lower Stone Church Road. The project has come with months-long closures of the road.

Chad Cheeseman and his father, Larry, are trying to stay positive while simultaneously worrying about cutbacks that may be necessary.

“What killed me was when they closed it down there (toward Bostian Heights) for 18 months. There was a 5-mile-long detour to go around it, and who’s going to backtrack five miles to come here?” said Chad, who took over the business in 2015 from his father, Larry.

Roughly two weeks ago, construction crews closed a section of Old Beatty Ford Road in the other direction — toward Rockwell. And Chad says he’s losing approximately $1,000 per day.

“I know that they’ve got a job to do, and I know that when things get done my business may double or triple, but what the state doesn’t realize is how they’ve crippled me while they’re doing this job,” he said.

The Cheesemans acquired the property in the early 1990s when it was a house. Larry transitioned it to a convenience store in 1993 after he and Chad sat on the porch one day and counted 100 cars driving by in about an hour. Larry recalled that the business — only selling snacks, food and coffee — generated $300 in sales on the first day.

“From there, business just kept growing. We couldn’t hardly keep up with the growth,” Larry said.

The recent construction has slowed that trend.

Upgrades being completed on Old Beatty Ford Road include widening, relocation of ditches, reducing curves in the roadway, realigning intersections, upgrades to pipes and culverts under the roadway and installing new guardrails and signs. It’s classified by DOT as a separate project from the I-85 widening and construction of a new interchange, but it’s occurring at the same time.

“The project overall is going to be a safety improvement,” said Kelly Seitz, resident engineer for N.C. DOT Division 9 in Rowan County.

Years ago, improvements were made to the intersection where Cheeseman’s store sits, and it’s a reason why traffic is being routed elsewhere.

“He’s actually in a gap that’s not part of the project because his intersection was upgraded previously,” Seitz said. “I do understand that he’s probably seen some inconvenience.”

That inconvenience, or drop in business, is compounded by the usual concerns about theft and turnover in employees, said Cheeseman.

“If they take one candy bar per day, that’s $509 per year, and people are taking a heck of a lot more than one candy bar,” he said. “So, you compound that with the road closure and then the cost of training somebody new.”

But the Cheesemans say they want to stay positive about the future and have ideas about ways to expand once traffic picks back up, including a bait and tackle shop and non-ethanol fuel for boaters driving to High Rock Lake.

“We’re not going to think about the negative,” Larry said. “I don’t think it’s going to be an instant thing where people suddenly come back, but I do believe traffic is going to pick back up once the road is all the way open.”

Seitz says the Old Beatty Ford Road improvement project is scheduled to wrap up in July 2020. And if needed, Chad says he’ll work the store alone for 12 hours per day before he shutters it.