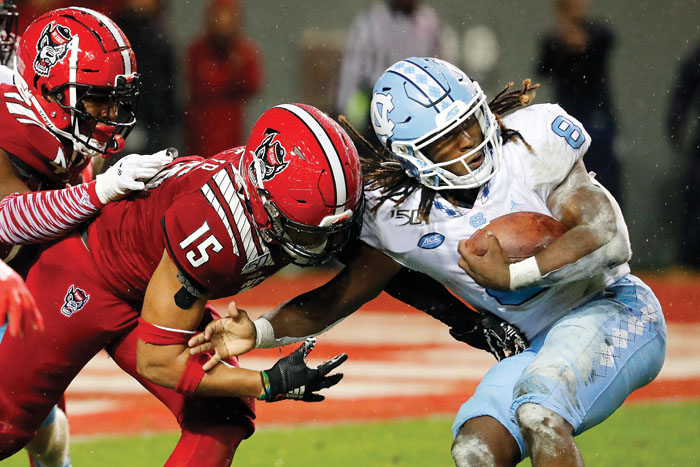 North Carolina's Michael Carter (8) bounces off the tackle of North Carolina State's C.J. Hart (15) during the first half of an NCAA college football game in Raleigh, N.C., Saturday, Nov. 30, 2019. (AP Photo/Karl B DeBlaker)

RALEIGH (AP) — North Carolina is headed back to a bowl game in the first year of Mack Brown’s second stint as coach after Javonte Williams scored two touchdowns rushing and another receiving in the third quarter Saturday night to spark a 41-10 win over rival N.C. State.

The Tar Heels (6-6, 4-4 ACC) trailed 10-6 at halftime before Williams busted free up the middle for a 26-yard scoring run on UNC’s second possession of the second half to give his team the lead for good. On the Tar Heels’ next two possessions, Williams caught an 11-yard flare pass for a touchdown and scored on a 6-yard run as UNC stretched its lead.

N.C. State (4-8, 1-7) finished the season on a six-game losing streak despite scoring the only touchdown of the first half on a 39-yard pass from Devin Leary to Tabari Hines. The Wolfpack held UNC to 24 rushing yards and two field goals in the first half as Williams managed just seven yards on four carries.

But a four-touchdown outburst by the Tar Heels in the third quarter turned the game into a rout. UNC intercepted Leary twice and recovered a Zonovan Knight fumble for three takeaways in the quarter. Williams rushed for 51 yards and two touchdowns on five carries in the quarter and added three catches for 42 yards and another score.

Following the second interception of Leary, Sam Howell put an exclamation point on the quarter with a 52-yard scoring pass to Dyami Brown. Howell increased his touchdown pass total for the season to 35 — an FBS record for a true freshman.

Howell was 23-for-33 passing for a career-high 401 yards and three scores with one interception.

Becoming bowl-eligible was a sweet accomplishment for a team that went 2-9 in 2018 under Larry Fedora, who was replaced by Brown after the season. Brown, who coached the Tar Heels to a 74-52-1 record from 1988 to 1997, saw this year’s team surpass UNC’s total number of wins from 2017 and 2018 combined while all six Tar Heel losses were by seven points or fewer.

UNC: Becoming bowl-eligible gives the program momentum and an opportunity to get valuable extra practice time with the new coaching staff. A lopsided win in the state rivalry game also could give the Tar Heels a recruiting edge after losing four of their previous five games against N.C. State.

N.C. State: The injury-riddled Wolfpack never gave up this season and put forth a courageous effort in the first half of the state rivalry game despite having no chance to become bowl-eligible. N.C. State loses just 12 seniors, so next season it will return numerous underclassmen who got valuable experience because of all the injuries.

UNC: Will play on a bowl game TBA, ending a two-year postseason drought.