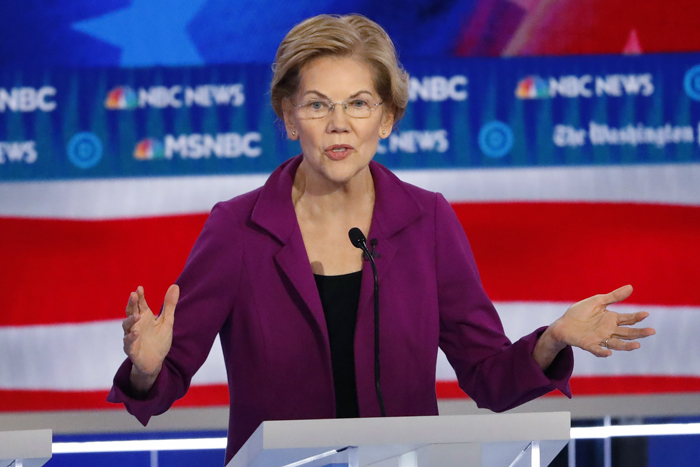 By George F. Will

WASHINGTON — Elizabeth Warren was supposed to be the thinking person’s Bernie Sanders, impeccably progressive but with realistic arithmetic connecting aspirations to resources. Then came her explanation of how she would finance “Medicare for All.”

Before Republicans wearied of pretending to care about fiscal rectitude, they pretended that they could eliminate budget deficits by eliminating “waste, fraud and abuse,” a pledge that demonstrated their familiarity with fraud. Warren prices her Medicare for All at $20.5 trillion in a decade, which is $10 trillion to $14 trillion less than estimates from serious sources (the Rand Corp., the Urban Institute, the Mercatus Center). She makes audacious assumptions that would make Republicans blush, if they still could.

For example, 11% of her plan’s cost will be covered by cutting payments to providers such as hospitals (35% below current private insurance rates) and physicians (25%). Does her clairvoyance extend to how many of the former will then close and how many of the latter will retire? She assumes that states and cities, which cannot be compelled to do so, will send to Washington the $6.1 trillion they spend on health care. She assumes that her administration can collect an additional $2.3 trillion by shrinking the “tax gap,” i.e., reducing tax evasion, a decades-old aspiration in Washington that would have been accomplished already if it were possible. And so on, and on.

Warren cheerily says, “No one gets left behind. … Some of the people currently working in health insurance will work in other parts of insurance, in life insurance, in auto insurance,” which supposedly will suddenly need the 370,000 people who today work in private health insurance. She sees society as a Tinkertoy for clever people like her to disassemble and reassemble, shuffling around hundreds of thousands of people.

Never has there been such a brittle prospective presidency. Warren is vain about the specificity of her plans for expanding the federal government’s scope far beyond what either the New Deal or Great Society envisioned. Yet the entire edifice of her “transformation” of society by government spending and fiats rests upon the rickety assumption that her proposed wealth tax is constitutional.

But because the Constitution forbids “direct” federal taxes, the 16th Amendment was necessary to make the income tax possible. Warren’s evident theory — that the federal government can, without an amendment, impose a general tax on accumulated wealth — implies that the term “direct” effectively prohibits nothing, so the 16th Amendment was unnecessary.

Were her wealth tax to survive judicial review, and were it to have its intended effect of steadily shrinking the supply of billionaires, who then would fund progressivism’s agenda? The spending commitments would remain in place, so where would government then go for revenues? To where most of America’s money is: the middle class.

Warren, whose profile in courage is to foment hostility toward a small minority (“billionaires”), should try an experiment — not at her rallies of the resentful, but with an audience of representative Americans. Ask how many in the audience own an Apple product? The overwhelming majority will raise their hands. Then ask: How many resent the fact that Steve Jobs, Apple’s innovator, died a billionaire? Few hands will be raised.

Few Americans know, but most intuit, what economist William D. Nordhaus, a Nobel laureate, argues in a 2004 paper: Innovators capture only about 2.2% of the surplus from innovation. The surplus is, basically, the innovation’s value to society, minus the cost of producing it.

Warren’s dependence on a wealth tax announces progressivism’s failure of nerve, its unwillingness to require anyone other than a tiny crumb of society’s upper crust to pay significantly for the cornucopia of benefits that she clearly thinks everyone wants — but only if someone else pays for them.

The way Warren has cooked the books regarding her health care financing testifies to Donald Trump’s success in normalizing preposterousness. Candidate Trump breezily promised to erase the national debt in eight years, which would have required retiring $2.4 trillion a year, a sum equal to 55% of the fiscal 2019 budget.

Warren’s politically, socially and economically surreal bookkeeping is more egregious than his because she is intelligent enough to know better, and because she used ingenuity, which he does not possess, to disguise her disingenuousness.

Her cachet has been intellectual gravitas, supposedly demonstrated by blueprints for refurbishing everything. Suddenly “the thinking person’s Bernie Sanders” seems more like progressivism’s Trump, exacerbating social hostilities and playing fast and loose with facts.

Markets, for which Warren has minimal respect, are information-generating mechanisms, and America’s political market is working. Her Medicare for All plan provides indispensable information, not about governance but about her.

Email George Will at georgewill@washpost.com.