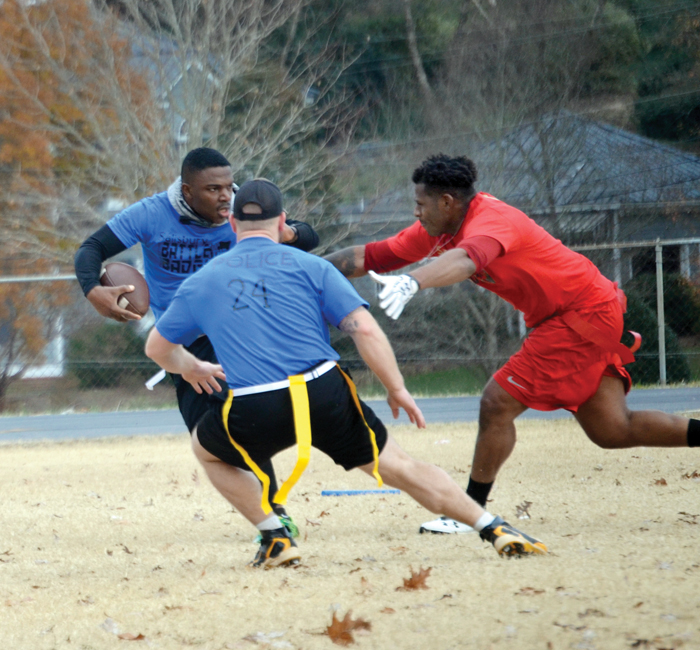 SALISBURY — In a battle between the Salisbury Fire and Salisbury Police departments, both seemingly came out on top during a Saturday flag football game and fundraiser.

The fire and police agencies are always working, and often working together, Williams said, but this was an opportunity to just have fun and have bragging rights the whole year.

In Saturday’s game, the fire department was ahead after the first half of the game, with the score being 21 to 7. In the end, both teams tied, with 35 points after triple overtime.

The flag football game idea came about after fire investigator Wesley Jackson and Salisbury police officer Malik Byrd got into a friendly argument about who would win a football game — police or fire. That idea was expanded, with each agency choosing a charity to donate proceeds. The departments raised $700 in total. Since the game ended in a tie, each department’s charity will receive contributions.

Valerie Griffin, who attended to support son, Derry Brown, a Salisbury firefighter who played football for Livingstone College, said she thought the game was a good idea, “to bring police and fire together.” Griffin said it was a chance for the police and firefighters to get a break from work, relax and “have some fun for a change.”

Brenna Miller attended with her family to support the teams.

Samantha Arnold, whose husband James was playing for the firefighters, also thought it was a good idea, noting it not only brought the agencies together, but also their families. Arnold said there’s been a friendly rivalry between the police and fire for years.

He said it’s not often that they get to hang out and this was an opportunity to get to know some of the firefighters.

“I’m happy that we could get together to jump in for a good cause,” said fire engineer Casey Stiller.