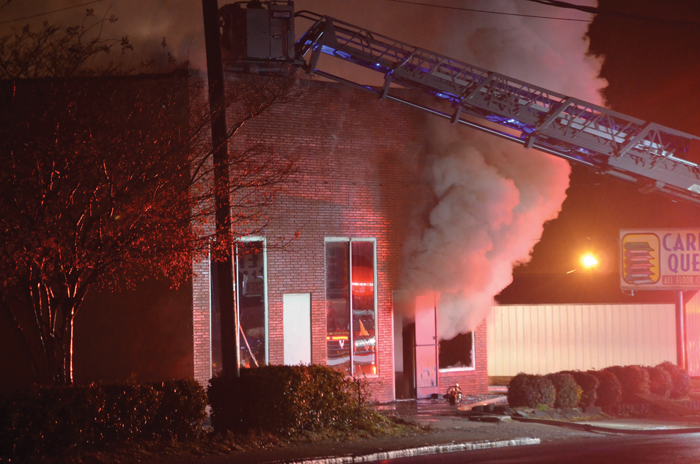 SALISBURY — Firefighters from across the area responded to a Saturday night, three-alarm fire at Carpet Queen after a motorist reported seeing smoke coming from the building at 811 W. Innes St.

There were no injuries and no one was thought to be inside of the building at the time of the fire.

When firefighters arrived, there was heavy smoke coming from the front of the building, said Salisbury Fire Department Battalion Chief Tim Hurlocker.

Carpet Queen has a store and storage garage located on the same property. A nearly-empty lot owned by a storage building business is situated between the carpet store and Sonic Drive-In. The fire was contained to the store.

Hurlocker said firefighters determined quickly they would need to attack the fire from outside of the building and did not send anyone inside.

It appeared the building was severely damaged, but the extent of the damage will need to be determined during an inspection.

All of the city of Salisbury’s firetrucks were on the scene and several other agencies provided mutual aid and covered the city’s area while it responded.