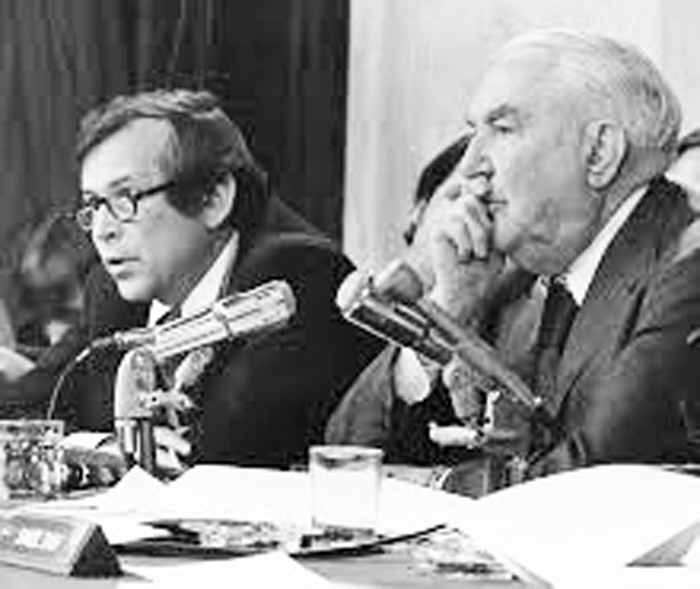 As the impeachment hearings concluded, committee Chairman Adam Schiff discussed the difference between the Watergate scandal, which forced President Richard Nixon from office in 1974, and the current case against President Trump.

Baker was the ranking Republican on the Senate committee that investigated Watergate. He started out as a strong supporter of Nixon, but as the evidence mounted against the president, Baker changed his mind. It is that model — Baker’s devotion to facts and fairness, not blind tribal partisanship — that is sorely lacking in Trump’s Washington.

Schiff is not completely correct: There is a difference between Nixon and Trump. Nixon masterminded a criminal conspiracy from the Oval Office to subvert the 1972 election and then conceal his crimes. After the White House tapes were released, his guilt was undeniable. The charges against Trump — bribing Ukrainian officials to investigate a political opponent — remain murkier and harder to prove.

Still, it’s important to remember Baker’s legacy. He frequently asked the same question of witnesses — “What did the president know, and when did he know it?” — and that inquiry made him famous. But his real contribution was that he listened to the answers.

At first, he told the Associated Press many years later, he was convinced that the Watergate inquiry “was a political ploy of the Democrats, that it would come to nothing. But a few weeks into that, it began to dawn on me that there was more to it than I thought, and more to it than I liked.”

Sen. Sam Ervin, the North Carolina Democrat who headed the committee, wrote in “The Whole Truth,” his book about Watergate: “I suspect that the White House undertook to bring much pressure on (Baker) to influence his conduct as a member of the committee. … If it did, it failed in its purpose.”

As a correspondent for The New York Times, I covered Howard Baker for many years, first during his tenure as the Senate majority leader in the early 1980s, then when he served as White House chief of staff at the end of the Reagan administration. He was one of the most honorable public figures I’ve ever met.

Baker, who died in 2014 at age 88, was a creature of Congress. His father and stepmother both served in the House. He married the daughter of fellow Sen. Everett Dirksen, and after her death, he married Sen. Nancy Kassebaum of Kansas. He could resist Nixon’s pressures because he had a larger sense of duty: to the Senate as an institution, and to the country and its values — not just to the current occupant of the White House.

Trump defines loyalty in only one way: Are you for me or against me? Are you a pro-Trumper or a never Trumper? And not a single Republican, at least not yet, has shown the sort of independence that Baker displayed 45 years ago.

“It’s not a party anymore in the traditional sense; it’s a cult,” GOP strategist John Weaver, a frequent Trump critic, told The Washington Post. “So he’ll be successful in averting conviction in the Senate and removal from office because the party is completely subjugated to him.”

Baker’s story also highlights two larger trends that go well beyond Trump. The first is the hollowing out of Congress via the demise of two vibrant traditions in American politics: conservative Southern Democrats and progressive northern Republicans. They were the lawmakers who often crossed party lines, who made deals, who modulated partisan passion with pragmatism.

Sen. Ervin was a perfect example of that profile: a Democrat widely respected by Republicans. So were a number of Republicans on the House Judiciary Committee who voted to impeach Nixon: Bill Cohen of Maine, Hamilton Fish of New York and Lawrence Hogan of Maryland.

The other trend is the rise of right-wing media that makes it far harder to educate voters and move public opinion. Trump supporters who get their information from Fox News and Rush Limbaugh never even hear the sort of evidence that motivated Baker to alter his views. They only get the party line that reinforces what they already believe.

So Schiff’s question remains a good one: Where is today’s version of Howard Baker?

Steven Roberts teaches politics and journalism at George Washington University. He can be contacted at stevecokie@gmail.com.