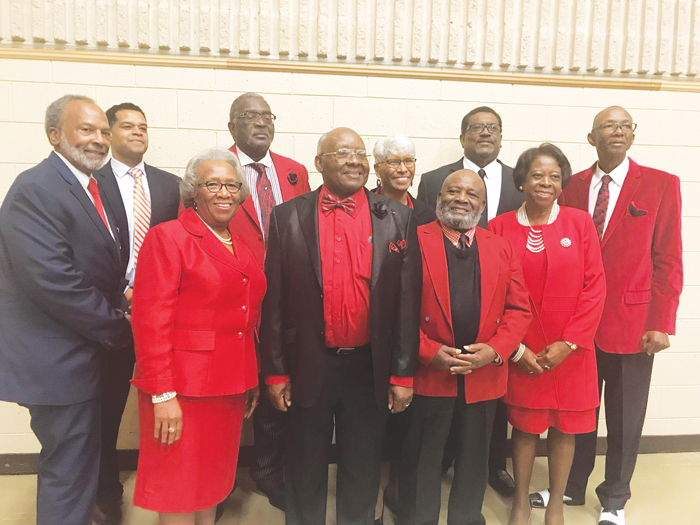 SALISBURY — The J.C. Price Red Devils earned their last football win by a 15-6 score on Nov. 1, 1968, when they beat neighbor and rival Dunbar, of East Spencer, for the second time that season.

The final game in the Red Devils’ storied gridiron history came the following week, on Nov. 8, on the road in Reidsville against Booker T. Washington High.

But then Rodney Harris, who made 13 tackles that night, blocked a Reidsville punt to give the Red Devils the ball at the Reidsville 30. On the next play, quarterback Kenny Holt threw a  touchdown pass to end James Partee.

The Red Devils fell 37-7 to end a 5-4 season — and an era — but Partee had the honor of scoring Price’s last touchdown. Holt, who kicked the PAT, had the honor of scoring the last point in a  grand football history that included two state championships under the guidance of coach Spencer W. Lancaster. Price was the champion for all of North Carolina’s African American schools in 1940, when the Red Devils shut out 11 straight opponents, including a powerful Raleigh team to win the title.  The Red Devils beat Tarboro’s Pattillo High on a frozen field for the 2A title in 1952.

There were several more Price teams that went undefeated but didn’t get to participate in title games due to travel restrictions or rulings by commissioners.

The achievements of student-athletes who attended Salisbury’s J.C. Price High from 1922-69, in the days of school segregation, were recognized once again on Sunday, Nov. 3, with the induction of Price’s 14th Sports Hall of Fame class. Partee, who caught that final touchdown pass and also starred for the Red Devils’ final basketball team that went 14-4 in the winter of 1969, was one of the inductees.

The Salisbury Civic Center was the site of the induction. Attendance was estimated at 250 former Red Devils, family and friends, with black and red, the school colors, prominently displayed. It was an assemblage that evoked pride, love, laughter and fond memories.

Carl Marlin, chairman of the planning committee, was the emcee for the event. He introduced the members of the selection committee —  Earl Blakeney, Larry Connor, Brenda Cowan, Wayne Woodruff, Raemi Evans, Janine Evans and Fredrick Evans.

After singing the Alma Mater, “The Black and Red”, led by Phyllis Partee and former members of the Price High School Glee Club, Marlin offered a few bits of Price’s athletic history.

The early football teams rode to out-of-town games in a moving van and  practiced in the evening with the help of car headlights. Those early teams had no goal posts, played in old uniforms and received limited media coverage, but they won almost every game.

McLaughlin played on Price’s offensive line. He now lives in Tucson, Arizona, and was unable to attend, but his son,  Harry McLaughlin, Jr., represented him and thanked the committee.

In a statement his father wrote, “We always played hard and never gave up.  My football experience at Price was a character builder.  My fondest memory was when Price defeated Carver High of Winston Salem 7-0.”

Cureton played outside linebacker for the football team and was on the track and field team. “In those four years I met some amazing people who not only coached me but motivated me to be the best I could be,” he said.  “Coach Lancaster would say, ‘You can give out, but you don’t give up’, and that little saying has stuck with me for 59 years.”

Clark, who now lives in Fort Washington, Md., played on the offensive line.

“We took pride in being the mighty Red Devils of Price High School,” he said.  “We learned through strong military tactics and it made me a stronger player and person.”

Clark has to coax his grandfather into buying him football shoes.  When he finally got them, they were much too small, but he wore them proudly, anyway.

Ijames said she was proud to have the strong support of her family throughout her athletic career.

Marlin  joked that Ijames tried out for the Harlem Globetrotters, but they were not yet ready for females.

Jerry Holt, who now lives in Fayetteville, said he was honored to attend  the banquet and to be a Price graduate.

He competed in football, basketball and track and was a football captain as a junior and senior.

He received letters of interest from the Dallas Cowboys and the Cincinnati Bengals.

Miller was a running back for the football team and also played basketball.

“We had some hard times, but some good times,” he said.  “I always have wanted to become a member of the Price Sports Hall of Fame.”

Tracey, “Number 55”, came to the banquet from McCalla, Alabama.

He competed in football, basketball and track and recalled running 80 yards for a touchdown and receiving the MVP award his junior year.

“Hearing about such outstanding players as Steve Gilmore, Oatten Fisher and Michael (Sylvester) McMahon made me want to play for Price,” he said.

Lanear recently moved back to Salisbury after having lived in Rocky Mount for 27 years and 18 years in Chesapeake, Va.

Besides being a scholar, she played basketball and reminded the audience that her number was 23, “just like Michael Jordan and her brother.”

She expressed her love for her teachers, students and teammates at Price.

“I will always cherish the Black and Red,” she said.

Partee, who now lives in China Grove, stood out in football and basketball.

In football, he played defensive end, offensive end, tackle and center and was on special teams.

Partee was one of the leaders for Price’s 1969 basketball team, coached by Fred Evans. That team topped 100 points in three straight games against Reidsville, Statesville and Dunbar.

Partee joined his brothers as a  Hall of Fame member and expressed extreme gratitude.

A common theme for all the inductees was their fondness for their teachers, coaches and most importantly the excellent education they received at Price.

The Founders Award, presented annually in memory of the late Rufus Little, John Mackey and Fred Evans, is given to the Price graduate who has made a tremendous impact on the Salisbury-Rowan Community.

Fredrick Evans presented this award to Dr. Mary Strawder Ponds.  Before doing so, he stressed the impact Price continues to have in Salisbury and beyond.

“Wherever I go I seem to find a proud Pricean who speaks volumes for the sports and academic programs,” he said.

Dr.Ponds served as mayor of Granite Quarry for 14 years. She was a board member of Novant Medical Center and later became the first African American chairman.

She’s a member of White Rock AME Zion Church where she is Superintendent of Sunday School and a steward. She’s the recipient of an honorary doctorate from Livingstone College, her Alma Mater. She received the Order of the Long Leaf Pine from the state of North Carolina and is a member of the Salisbury Chapter of Delta Sigma Theta Sorority, Inc.

In accepting, Dr. Ponds said, “Each act or gesture of recognition is an inspiration for me to continue to exemplify and encourage young people.  My desire is to always be a servant of my people, represent them well and do what is pleasing in God’s sight. I am grateful, deeply humbled and appreciative for the magnitude of this great award.”

A highlight of the ceremony was Wayne Woodruff’s four tables of Price memorabilia.

Connor gave the invocation and benediction.