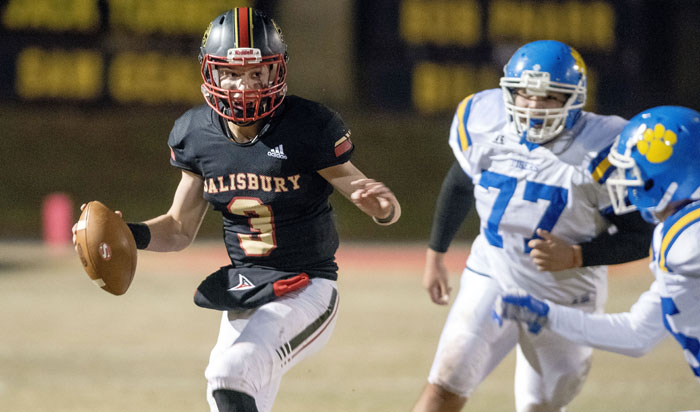 The Hornets prevailed, 12-7, surviving a 246-mile road trip that followed the 232-mile journey they took to Washington for the second round.

“We missed a PAT, missed two field goals, dropped a 2-point conversion,” Salisbury head coach Brian Hinson said. “We left an awful lot of points on the field, so it was pretty ugly. But you’ll take an ugly win over a pretty loss every time. That’s what our told our team. I’m just very happy for our kids.”

Hertford County, which already had knocked Salisbury’s Central Carolina Conference rivals Ledford and North Davidson out of the playoffs, was a worthy adversary. The Bears finished 11-3.

“They’re really good — big, fast, athletic,” Hinson said. “We knew this was going to be really tough. They put a lot of people in the box and make it hard for you to run the ball. We just had to grind and be patient on offense. We had to take some lumps when we had the ball and trust our defense to keep getting stops.”

Salisbury’s defense got an extraordinary amount of stops — eight in the first half alone. That included a red-zone stop on Hertford’s first possession and stops after two Hertford interceptions.

Hertford County had the field-position edge early as the teams exchanged  a series of punts, but Salisbury quarterback/punter Vance Honeycutt eventually turned field position around.

With five minutes left in the first half, Honeycutt punted to the Hertford 19. After a three-and-out and a Hertford punt, Salisbury finally had a short field to work with and started a drive at the Hertford 40.

A pass play from Honeycutt to Jalon Walker moved the Hornets close, and Mike McLean’s 10-yard scoring run two minutes before halftime, his 14th touchdown of the season, gave the Hornets a 6-0 lead. The PAT failed, but Salisbury had the lead at the break.

In the second quarter, Hertford lost one of its standouts, 285-pound Jaylon Smith, a defensive end committed to Oregon.

“He’s really special, so that had an impact,” Hinson said. “In the second half, we did some pretty decent things on offense. We were getting the ball out quicker, getting it to guys in space more, and we moved the ball better.”

Four minutes into the second half, Honeycutt punted to the Hertford 6-yard line. Salisbury got another stop, the 10th for the Hornets. After a punt, Salisbury started a drive at the Hertford 23. But the Hornets couldn’t move far. Then a field-goal try failed.

“That would’ve been huge — it would have meant a two-possession lead,” Hinson said.

On its 11th offensive possession, Hertford’s offense, which came in averaging 41 points per game, finally broke through. QB Tye Saxby hit Armand Vinson (who had two interceptions) on a 55-yard scoring play. Hertford missed the PAT, but Salisbury was flagged. Alden Lassister kicked the PAT on his second try and the Bears took a 7-6 lead with two minutes left in the third quarter.

“We had a mistake in the secondary on that play where they scored, but our guys back there had great coverage just about all night against some talented athletes,” Hinson said.

Salisbury lost a fumble, but the defense held again. With about nine minutes left, Salisbury was able to start the drive that proved decisive.

The key play on the drive was a slant pass from Honeycutt to Patrick Taylor. Then Honeycutt got the go-ahead touchdown on a third-down play  from the 14-yard line on a quarterback sweep. That put the Hornets ahead, 12-7, with seven minutes left.

“We didn’t block it great, but Vance made a play,” Hinson said.

With three minutes left, Hertford launched its final push. The Bears made it all the way to the Salisbury 25 with 1:30 left, but they were stopped by another fumble. Linebacker Jabril Norman made a play for the Hornets.

“Our defense was lights out, just like they have been all year,” Hinson said. “They did more bending than they’re used to, especially in the second half, but they didn’t break.”

Next for the Hornets is a trip to top-seeded Randleman (13-0) next Friday for the regional final. The winner of that one will play in a state championship game at Wake Forest.

Randleman is only 51 miles away. For the Hornets, that’s practically next door.