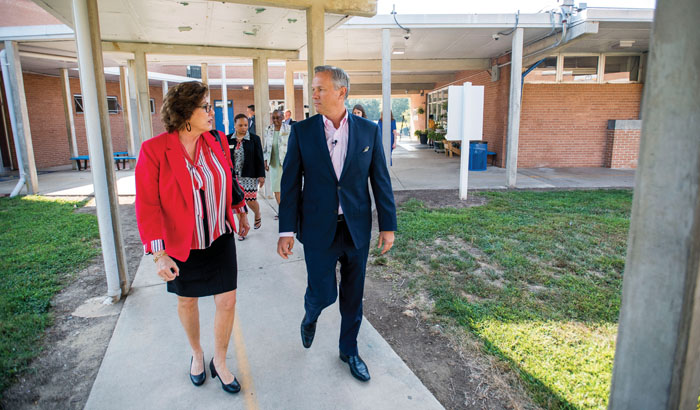 Nearly three months ago, the state released school performance grades, and they showed much of the same for Rowan-Salisbury Schools.

The scores were largely flat, with some minor fluctuations. Rowan-Salisbury was a few points shy of a low-performing district, with 15 of its 33 schools receiving a grade of “D” or “F” and a growth status of “met” or “not met.” In the two months that followed and as a part of “renewal,” RSS staff worked to finalize a new accountability model to measure student performance. The school board gave the model its OK on Oct. 29, and the first report based on that model could be ready for release by summer. Moody is scheduled to help launch the district’s new accountability model in January with a “state of the district” speech.

Critics of the Rowan-Salisbury School System long ago dismissed Superintendent Lynn Moody’s comments about the recent performance grades. But it’s worth revisiting them, if only for a moment, because she raised a critical point that must not be overlooked.

The state’s model for school performance grades is mostly test-based, with just 20% based on growth. That standardized tests scores are the primary factor in the state’s judgment of schools, each with hundreds of students and dozens of teachers, represents “an ordering and sorting of economic status,” Moody told the Post in September. Children from higher-income homes have more opportunities to learn and apply their knowledge, Moody said.

While Moody’s ordering and sorting comment is blunt, it’s true. Rowan-Salisbury bordered on a low-performing district in the most recent school performance grades, an estimated 28% of children in the district are in a family that receives food stamps and 24% live below the poverty line, according to the National Center for Education Statistics. At individual schools within the district, the percentage is much higher.

Consider Bostian and Faith elementaries, generally thought to be among the best schools in Rowan County. At Bostian, students labeled economically disadvantaged (eligible for free or reduced lunch or other public assistance) received a letter grade of “D” and score of 51 in the 2018-2019 year. That was a full letter grade and nearly 20 points worse than the student body at large. At Faith, economically disadvantaged students faired slightly better, receiving a grade of “C” and a score of 59. That was also worse than the student body at large and an example of a trend that repeats itself across the district, especially when there’s concentrated poverty.

At Koontz, 71.2% of students are labeled economically disadvantaged. Students with that label received a grade of “F” and a score of 22 in the most recent school performance grades. Again, that was worse than the school at large.

But maybe other systems have found the panacea?

The answer appears to be “no.”

Consider the Chapel Hill-Carrboro School System, where no school scored lower than a “C,” most received a grade of “B” and the system’s alternative school is the only one where a majority of students are economically disadvantaged. Just 6.4% of students in the Chapel-Hill Carrboro district live in families with income below the poverty level.

But at schools like Glenwood Elementary — a short drive from the UNC Chapel Hill campus — economically disadvantaged students scored significantly below the student body — a letter grade of “C” and score of 59 as compared to “B” and 81 for the school at large.

The trend of economically disadvantaged children scoring worse than the student body is also present in every other county the Post analyzed.

When the primary system by which the state judges schools routinely ranks poor students worse than their better-off peers, it’s not the use of test scores to measure students that’s the issue.

The entire system is more akin to an “ordering and sorting of economic status” than a true measure of accountability.