Dobbins, Fields power No. 2 Ohio State past No. 10 Michigan 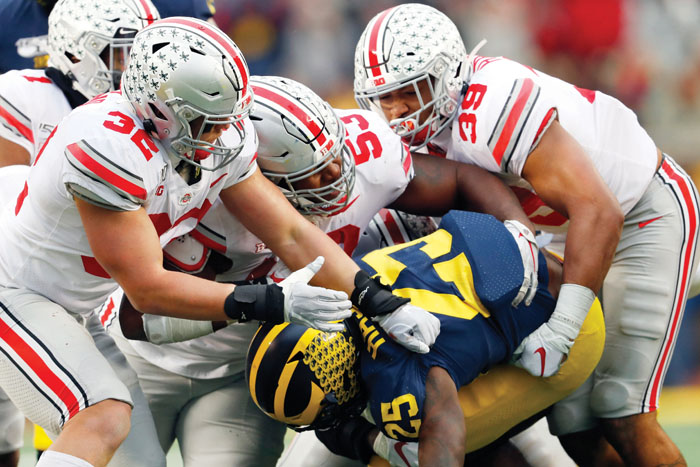 The Buckeyes (12-0, 9-0 Big Ten, No. 1 CFP) will head to the Big Ten championship game with a spot in the College Football Playoff in sight against No. 13 Wisconsin next Saturday.

The Wolverines (9-3, 6-3, No. 13 CFP) will have to settle for a second- or third-tier bowl game after coach Jim Harbaugh fell to 0-5 in the rivalry, and the Wolverines lost to Ohio State for the 15th time in 16 years.

Travis Etienne ran for two touchdowns to break Atlantic Coast Conference marks for career touchdowns (57) and rushing scores (53) as the Tigers dominated on the way to a sixth straight win over South Carolina (4-8).

Lawrence had touchdown throws of 10 and 65 yards to Tee Higgins and of 16 yards to Justyn Ross. Lawrence also had 66 yards rushing for Clemson (No. 3 CFP), which will attempt to become the first program to win five straight league championship games when it meets Virginia next weekend.

ATLANTA (AP) — Jake Fromm threw four touchdown passes and Georgia cruised into the Southeastern Conference championship game with its biggest win ever over its state rival.

The Bulldogs (11-1) were 28-point favorites over the Yellow Jackets (3-9) and this one was never in doubt, even as Georgia struggled a bit offensively, fumbled the ball away three times, dealt with injury woes, and failed to cover an onside kick.

This was a mere speed bump on the way to next week’s SEC title game, where the Bulldogs will face No. 1 LSU with a berth in the College Football Playoff on the line.

Will Levis played quarterback for the Nittany Lions (10-2, 7-2 Big Ten, No. 10 CFP) in place of injured started Sean Clifford and added 108 rushing yards on 17 carries and a 42-yard touchdown pass to Jahan Dotson in the fourth quarter.

EUGENE, Ore. (AP) — Justin Herbert threw for 174 yards and a touchdown in his final game at Autzen Stadium and Oregon held off Oregon State in the 123rd Civil War rivalry game.

Oregon (10-2, 8-1 Pac-12) wrapped up the regular season with a perfect record at home for the eighth time. The Ducks reached 10 wins overall for the first time since 2014.

Book threw two TD passes to Chase Claypool and also connected with Tony Jones Jr. and Tommy Tremble to help the Fighting Irish (10-2, No. 16 CFP) snap a five-game losing streak at Stanford Stadium. Notre Dame also put together three straight seasons of at least 10 wins for the second time in school history, having previously done it under Lou Holtz from 1991-93.

LeMays’ 16-yard touchdown run for Charlotte (7-5, 5-3 Conference USA) broke a 7-all tie. Aaron McAllister’s 9-yard scoring run early in the second made it 21-7 and Jonathan Cruz made a 36-yard field goal with 7:37 before intermission made it a 17-point lead at the break.

Chris Reynolds (Davie County) completed 9 of 12 passes for 166 yards and two touchdowns and ran for 96 yards on 11 carries for the 49ers. Victor Tucker caught three passes for 118 yards and a score and Tyler Ringwood caught a touchdown pass.

Brooks, a junior, finished the season with 1,086 yards rushing.

The Pirates led for 36 seconds when Jake Verity kicked a 51-yard field goal with 1:42 left in the first quarter. With 66 seconds left in the first, Smith threw a 66-yard touchdown pass to Sam Crawford Jr. Smith followed with two more TD passes, one to Keylon Stokes for 29 yards and the other to Keenen Johnson for 4 yards and the Golden Hurricane (4-8, 2-6 AAC) led 21-3 at intermission. T.K. Wilkerson’s 10-yard scoring run 3½ minutes into the third made it 28-3.

Holton Ahlers led East Carolina (4-8, 2-6) with 308 yards passing and three touchdowns. C.J. Johnson had 141 yards on six receptions and a touchdown and Blake Proehl caught a pair of touchdowns.