Christmas lights come on in Granite Quarry, thanks to ‘Danny’ 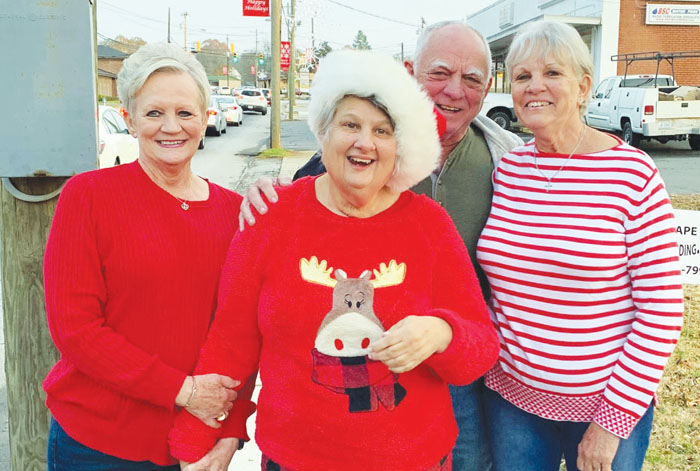 With her brother Tony and flanked by her sisters Brenda Costantino, left, and Carroll Semones, right, Danette 'Danny' Vernon stands on Salisbury Avenue Wednesday after turning on the Christmas lights for the town of Granite Quarry. Submitted photo

GRANITE QUARRY — While she and her family waited early Wednesday evening in the Town Hall parking lot, Danette “Danny” Vernon walked up to Mayor Bill Feather and gave him a hug.

“If she sees you, she’s going to hug you,” said Brenda Costantino, Danny’s sister and the wife of Alderman Jim Costantino. “She’s special to us.”

Granite Quarry Maintenance Director Jason Hord, who doubles as the fire chief, soon announced things were ready, and Danny walked to a switch box in front of the Town Hall sign and did the honors.

She flipped the switches to turn on the town’s Christmas lights along Salisbury Avenue (U.S. 52) for the first time this season.

Needless to say, Danny was thrilled.

Jim Costantino had the idea for his sister-in-law Danny to do the lighting honors. Hord made it possible Wednesday while Danny was visiting over the Thanksgiving holiday.

She came to see the Costantinos along with her brother Tony, their sister Carroll Semones and Carroll’s husband, Larry.

Danny, who will be 56 in January, lives with Carroll and Larry in Moyock, a small Currituck County community near the North Carolina-Virginia line, on the way to Nags Head.

Carol became Danny’s guardian after the passing of both of their parents, Earlie and Irene Vernon, within the past five years.

Danny has led a challenging, miraculous life since birth.

When she was 3 weeks old, Danny contracted spinal meningitis and ran a 105-degree fever for three days. It led to permanent  brain damage, and she was hospitalized for three months with doctors telling her parents she probably would not survive.

Danny defied that early prediction and came home, but Earlie and Irene kept hearing what Danny would not be able to do.

“The family was told that Danny would never be able to sit up, crawl or walk,” Jim Costantino said. “She did all three, and then the doctors said she would not live past the age of 5, and this year she celebrated her 55th birthday.”

Danny has never been able to speak, and though it’s not true sign language, she knows how to communicate with her family. Brenda said it’s judged she has the mind of a 2-year-old.

“She’s here with us, and that’s all we worry about,” Brenda said. “She’s a fighter.”

Through the years, Danny also survived a serious automobile accident in which both of her ankles were broken; she recently came through ovarian cancer; and this October, doctors removed her thyroid, part of which was cancerous.

“Danny is a miracle and a true blessing from God,” Jim Costantino said. “Danny has never been able to talk, but she definitely knows how to express herself and how to show love for everyone.”

The Costantinos said Danny enjoys going on trips, eating out and dishing out hugs. At her home, she likes to sit on the front porch while listening to gospel music.

Brenda said Danny’s love for Christmas lights was evident in years past when the family would travel to see a man’s light display in Nags Head. Brenda said he had acres of lights to walk through and enjoy.

When Danny met the man responsible for it all, she walked up and did what you might expect.

She gave him a hug.