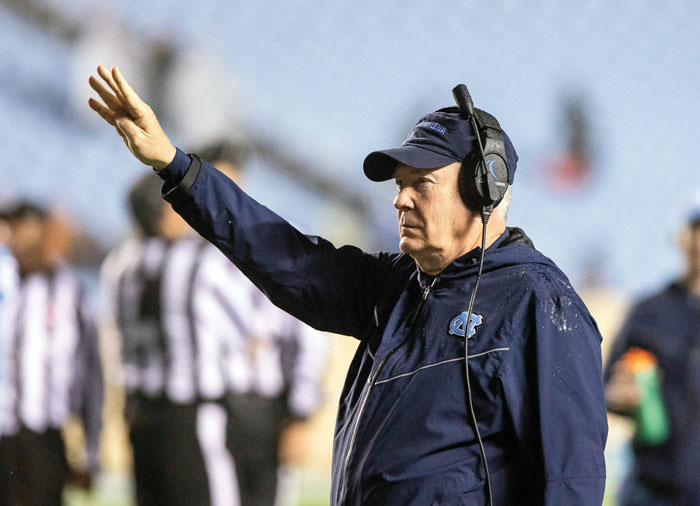 RALEIGH (AP) — North Carolina hasn’t earned a bowl berth in a while and hasn’t defeated North Carolina State in even longer.
The Tar Heels can check off both of those boxes Saturday night.
North Carolina can wrap up bowl eligibility for the first time in three years with a victory over a Wolfpack team with nothing to play for — except for the opportunity to spoil things for its fiercest rival.
“When you lose to a rival, you lose for the year,” UNC coach Mack Brown said. “Some of the other games, you go to the next game. Rivals last all year. So, you’ve got to live with it.”
The Tar Heels (5-6, 3-4 Atlantic Coast Conference) haven’t reached the six-win mark since 2016, when they played in the Sun Bowl for their fourth straight postseason appearance under Larry Fedora.
He was fired two days after his second consecutive nine-loss season ended with an overtime loss at home to North Carolina State — his third in a row in the Tobacco Road rivalry. The Wolfpack have won nine of the last 12 meetings.
“It’s time for us to step up and play better” against N.C. State, Brown said. “We’ve got to do our part in this rivalry and we haven’t done that four of the last five years. And you’ve got bowl eligibility at the end for us, and that’s something that these guys want to do.”
The Wolfpack (4-7, 1-6), who have slid into a last-place tie with Syracuse during a five-game losing streak, are left to play for pride and to send their seniors out with a victory over the team they most enjoy beating.
“Every one of these games that I’ve been a part of has been heated, and I know how much we want to win and how much they want to win,” said coach Dave Doeren, who is 4-2 against UNC.
Some things to know about the North Carolina-North Carolina State game:
SCHEDULE STRENGTH
The six teams that have beaten North Carolina are a combined 52-11, including three teams currently ranked — No. 3 Clemson, No. 22 Appalachian State and No. 23 Virginia Tech. Conversely, the Tar Heels’ four FBS victories have come against teams that are a combined 17-27 and of those, only Miami (6-5) will finish the regular season with six wins.
MACK VS. THE PACK
Brown is 5-7 in his career against N.C. State. He lost his first meeting with the Wolfpack in 1983 when he was at Appalachian State, then lost five in a row against them during the first five seasons of his first stint at UNC before winning his next five. His second team at Texas lost to N.C. State in the 1999 opener.
WELCOME BACK, DAZZ
North Carolina WR Dazz Newsome is expected back for this one. UNC said he was suspended for last week’s rout of Mercer after he overslept for a practice during the week.
GOOD KNIGHT
North Carolina State RB Zonovan “Bam” Knight has averaged 100 yards and 7.14 yards per carry during his last three games with a pair of touchdowns in that span. He’s gained 300 yards in three games after picking up 389 in his first eight. Knight ranks sixth among freshmen in the FBS, and third at the power-conference level, in rushing.
___
More AP college football: https://apnews.com/Collegefootball and https://www.twitter.com/AP_Top25