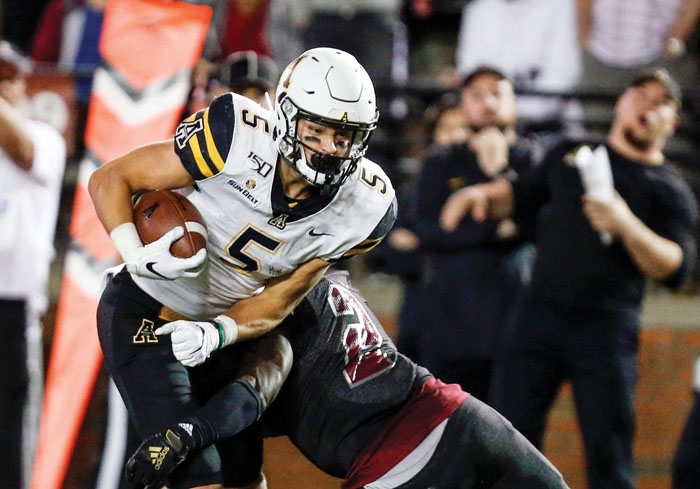 By JOHN ZENOR AP Sports Writer
TROY, Ala. (AP) — Zac Thomas and Appalachian State came out fast, built and maintained a big lead and then headed home.
That’s where they’ll remain next weekend.
Thomas passed for 326 yards and four touchdowns and rushed for a fifth score to lead No. 22 Appalachian State to a 48-13 romp over Troy on Friday night in the regular-season finale.
The win assured the Mountaineers (11-1, 7-1 Sun Belt Conference, No. 25 CFP) of hosting the league title game against Louisiana next Saturday.
“I think it’s a culmination of what we’ve worked for,” Appalachian State coach Eli Drinkwitz said. “That’s why you put in the blood, sweat and tears so that you can have something special at your home place. Obviously we hope it’s cold as crap and snowing.”
The Mountaineers did just fine in Alabama’s milder weather.
Thomas, Darrynton Evans, Thomas Hennigan and others all delivered big plays for Appalachian State, which reached the end zone on each of its first five possessions against the Trojans (5-7, 3-5).
Thomas was 28-of-34 passing with his final attempt a 25-yard scoring strike to Evans to start the fourth quarter. The Trussville, Alabama native had a 12-yard touchdown run.
Evans also scored on runs of 52 and 9 yards and gained 82 yards. Hennigan gained 140 yards on 11 catches and Malik Williams caught two short touchdown passes.
Appalachian State led 34-13 at halftime. The Mountaineers had two apparent touchdown passes negated by penalties on the final drive before the half, which ended with an interception, but didn’t punt until well into the third quarter.
It didn’t take long to realize the championship game would be played in Boone.
“I think it’s remarkable,” Thomas said. “I think any time you can get a bigtime game like that in front of your home crowd, it does measures not only for you as a player but your fans.”
The Trojans needed to win to become bowl eligible but fell behind 20-3 in the first 10 minutes.
Kaleb Barker passed for 281 yards with an interception, going 24 of 41. But the Trojans had just nine rushing yards entering the fourth and finished with 35.
“We had a few good opportunities on offense, but we just couldn’t get it in the end zone,” first-year Troy coach Chip Lindsey said. “Overall, we just didn’t get it done. We’re disappointed in how our season went.”
For Appalachian State, Thomas didn’t miss a beat despite the loss of leading receiver Corey Sutton to a torn ACL in the last game against Texas State.
“He hit some deep balls early and after that there was just no stopping him,” Hennigan said.
THE TAKEAWAY
Appalachian State: Matched its own Sun Belt record of 11 wins in a season after going 11-2 in both 2015 and 2018. Went unbeaten on the road (6-0) for the first time since 1995. Converted its first 10 third-down tries.
Troy: Closed the regular season with blowout losses to the Sun Belt’s two best teams, but this one was at least a better showing than the 53-3 loss to Louisiana. Fell to 2-22 against Top 25 teams.
SECOND CHANCE
Appalachian State defensive back Desmond Franklin bobbled and dropped a likely pick-six on one play near the goal line. On the next play he got another chance, scooping the ball out of the air after it was knocked from a receiver’s grasp and returning it 20 yards to set up a touchdown. Drinkwitz was happy with the outcome.
“But I’m going to be all over him for ball security, that was awful,” he said.
PAT STREAK ENDS
The Mountaineers’ Chandler Staton had made a Sun Belt-record 148 consecutive PATs before missing his first attempt of the game.
UP NEXT
Appalachian State hosts Louisiana on Dec. 7 in the Sun Belt championship game.
Troy’s three-year bowl streak ends, and the Trojans must replace the senior Barker next season.
___
More AP college football: https://apnews.com/APTop25CollegeFootballPoll and https://apnews.com/Collegefootball and https://twitter.com/AP_Top25