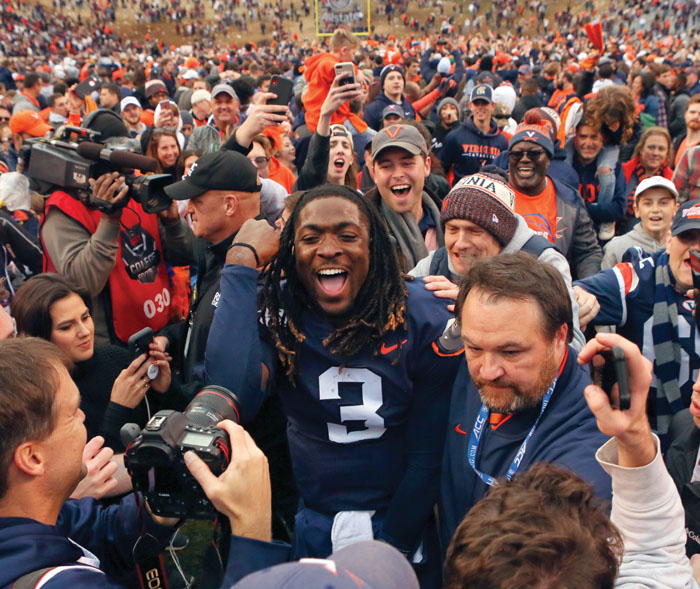 By HANK KURZ Jr. AP Sports Writer
CHARLOTTESVILLE, Va. (AP) — Even with a nine-point lead and less than a minute on the clock, Bryce Perkins was not ready to celebrate Virginia finally breaking its Commonwealth Cup drought.
It was only a year ago, in his first experience with Virginia’s annual rivalry game against Virginia Tech, Perkins botched a handoff in overtime that allowed the Hokies to extend their dominance in the series after a wild finish.
“I needed to see zeroes because I remembered last year,” Perkins said Friday after Virginia ended a 15-game losing streak to the 23rd-ranked Hokies and earned its first trip to the Atlantic Coast Conference championship game, with a 39-30 victory.
Perkins was a huge part of why the Cavaliers (9-3, 6-2) won, putting up 475 yards of offense. Brian Delaney kicked a go-ahead 48-yard field with 1:23 left in the fourth quarter and Virginia sealed it with a defensive score, causing fans to spill onto the field in a wild celebration.
“I was the last play that ultimately ended up losing us the game. I had to sit with that all year and it hurt, so this game I really wanted to go out there and be aggressive and just give everything I could for the team and not to let them down again,” Perkins said.
Perkins ran for two long touchdowns and passed for another for the Cavaliers (9-3, 6-2), who became the seventh different winner in as many years to win the Coastal Division. Delaney also kicked a 25-yard field goal for Virginia, and his last kick made up for a missed extra point early.
“How fitting after a missed extra point early that I thought was going to haunt us,” Virginia coach Bronco Mendenhall said.
Hendon Hooker ran for one touchdown and threw for another for the Hokies (8-4, 5-3), who came in having won six of seven games to surge into championship contention. A rallying defense and Hooker’s steady play drove the surge, but both came up short against Virginia.
The Cavaliers’ winning drive began with Noah Taylor’s interception of Hooker at the Virginia 35. Virginia moved steadily downfield, not facing a third down play until it was third-and-15 from the Hokies’ 40. Perkins hit Tavares Kelly for nine yards before Delaney’s kick.
The history of the series made the crowd cautiously optimistic — like Perkins — until on the Hokies’ ensuing possession. The Cavaliers sacked Hooker on three straight plays. Mandy Alonso had the last, forcing a fumble that Eli Hanback recovered in the end zone, finally giving the Virginia faithful enough cushion to celebrate the end of the Hokies’ decade-and-a-half of domination.
“We got in a situation there at the end of the game where everybody knows we’re throwing the ball. That’s not our strength,” Hokies coach Justin Fuente said.
Virginia led 13-6 after a defensive first half, but then the offenses took over.
“For a while there, it looked like nobody was going to score. Then it looked like everybody was going to score,” Fuente said
Hooker ran 34 yards to tie the game at 13. The next three series ended in punts before the Hokies drove 71 yards to take their first lead at 20-13 on Deshawn McClease’s 1-yard run. Virginia answered with a 79-yard march, Perkins hitting Joe Reed early in the drive for 42 yards to the Virginia Tech 35 and later connecting with Billy Kemp for the last 30 yards and the tying touchdown.
A 39-yard pass from Hooker to Tre Turner made it 27-20, and three plays into the fourth quarter, Wayne Taulapapa’s 2-yard run tied it at 27. Then the rivals traded field goals..
Perkins ripped off touchdown runs of 39 and 67 yards in the first half to make it 13-3. He had 137 rushing yards in the opening quarter.
THE TAKEAWAY
Virginia Tech: The Hokies had been 6-0 with Hooker as the starter, in part because of a surging defense and Hooker’s efficiency. He came into the game having thrown for 10 touchdowns with no interceptions in those starts, and while his streak ended at 124 passes without a pick on a Hail Mary throw to end the first half, the interception by Taylor on a deep ball proved the critical play of the game.
Virginia: Perkins started slowly throwing the ball but used those two huge draw play runs to cause the Hokies to have to adjust. He finally found his rhythm in the passing game and finished 20 of 33 for 311 yards. He also ran for 164 yards with 137 of those coming in the opening quarter.
WORDS OF ADVICE
Delaney said backup kick AJ Mejia gave him some words of encouragement before the critical field goal.
“(He) came over and said, “It’s not ending like this. You’re writing your own story,” Delaney said.
UP NEXT
Virginia Tech will await it 27th consecutive bowl invitation, the longest such streak in the nation.
Virginia will represent the Coastal Division against No. 3 Clemson in the ACC championship next Saturday in Charlotte, North Carolina.
___
Follow Hank on Twitter: www.twitter.com/hankkurzjr
___
More AP college football: https://apnews.com/Collegefootball and https://twitter.com/AP_Top25