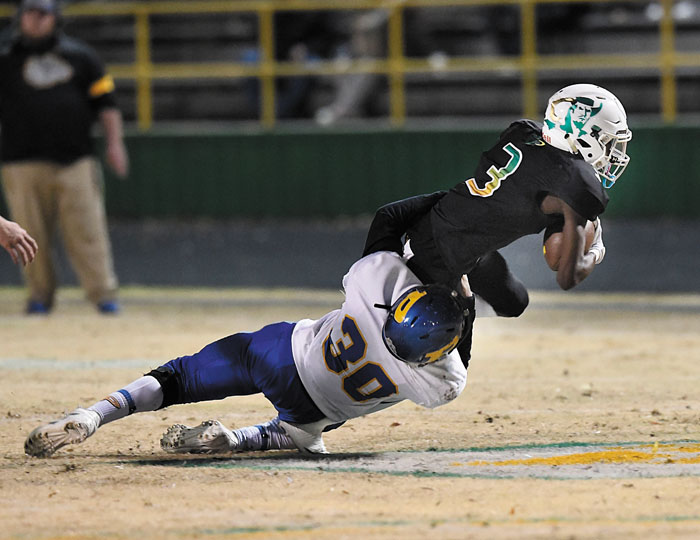 North Rowan's James Gladden (3), shown during a playoff win over Princeton on Nov. 22. On Friday night, the Cavaliers' season ended with a 49-0 loss at No. 1 seed Tarboro. ... File photo by Wayne Hinshaw, for the Salisbury Post

Coach Ben Hampton’s Cavaliers, who finish 9-4, were overmatched from the start, as the Vikings improved to 13-0 this season and extended their own winning streak to 43 games.

Tarboro, two-time defending state champs, is the No. 1 seed in the 1AA East bracket. The Vikings will host Edenton Holmes (12-0), 61-20 winners over Manteo, in the East final next Friday.

Tarboro scored touchdowns on all six of its possessions in the first half, and took a 43-0 lead to intermission. By rule, that lead started a running clock for the second half.

The Vikings received the second-half kickoff and went on to score another touchdown, an 8-yard run by Khalil Staton. That made it 49-0 and Tarboro began sitting its starters.

In the first quarter, Tarboro took advantage of two interceptions of North QB Kyree Sims. That led to rushing TDs from Cameron Powell and Travis Johnson. Later in the period, Tobias Joyner scored on a 3-yard run, for a 22-0 advantage.

Quarterback Kimani McDaniels was also flawless in running the Vikings’ famed Tarboro-T. He didn’t score himself but had several big runs that set up TDs. McDaniels also had a 2-point conversion pass to Powell.

The Cavaliers’ senior running back, Malcolm Wilson, who came into the game with 1,649 yards and 31 touchdowns, rarely found a lane against the Vikings’ tough defense. A 19-yard gain early in the game may have been Wilson’s longest of the game.